Campaigners headed to Tesco on Newmarket Road, Cambridge on 16 May 09 as part of an international day of action against Proctor and Gamble (P&G) who still test on animals. Proctor and Gamble are responsible for a huge array of products including Herbal Essences, Ariel, Fairy, Bold and even animal food under the label Iams/Eukanuba. 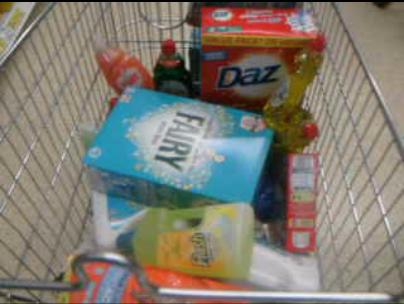 Campaigners filled a trolley with P&G products and left leaflets explaining about Proctor and Gamble's involvement in cruel and unnecessary animal tests. Activists then stood outside the main entrance and handed out leaflets to Tesco customers. Customers took an interest and showed support.

According to the Boycott P&G website “P&G admit that guinea pigs, rabbits, hamsters, ferrets, rats and mice are among the animals poisoned in their ‘product safety research’”. This mindless cruelty takes place so that this profit hungry company can sell it's over prised tat to a unquestioning consumerist culture.

The likes of the Co-op and others do not test their own brand cosmetics and household products on animals. Buying cruelty free is something everyone can do to make a stand against unnecessary violence. Plus buying Co-op own brand stuff is a lot cheaper then P&G!

A manager came out and spoke to campaigners and told them the police would be attending. The police arrived and asked for one of the flyers which activists were happy to give them. The police went into the store and stayed in side for a very long time, in which time the campaigners got out most of there leaflets!

An officer from NETCU then showed up and spoke to activists and went in to speak to the police woman in the store. The police officer then told activists to leave the outside of the Tesco as it was private property. The officer then said he had got a statement saying that a staff member had said that customers had been “intimidated” by leaflets being peacefully handed out!! He then said he would Section 14 the activists if they didn't leave. He seemed to change his mind about the Section 14 went an activist pointed out he would need to show “intent” to intimidate.

The officer then started pushing one of the activists. The activist then suddenly became very tired and decided to lay down on the floor! The officers discussed what to do because, apparently, there was no space in the cells! They decided to arrest the activist for “breach of the peace” and take him to the edge of Tesco's property and then de-arrest him. Once they were moving the activist the police planned what to do if he re-entered Tesco property. One suggested they take him to the edge of Cambridge and leave him! However the other officer said he knew the campaigners address and said they'd take him there.

The officers then went back to speak to the other campaigner still in Tescos car park and the recently de-arrested activist followed. The officers told them both to go and activists began walking off. Once the police were back at the main doors of Tesco one of the campaigners put the remainder of the leaflets on cars in the Tesco car park! One passing car even stopped to ask for a leaflet clearly after seeing the polices actions earlier, the police creating a scene generally helps somewhat!

-Animal Rights Cambridge meets on the fourth Monday of every month at the Bath House, Gywdir Street (off Mill Road), £1 hall hire per person.