Freedom for the accused of the fire of Vincennes’ center detention of migrants!

Since the end of 2007, the detainees of Vincennes’ center detention of migrants (France), have ceaselessly struggle for their freedom. The 21th 2008, a Tunisian called Salem Essouli died because of a lack of medical care. Then a revolt blew up, and the bigger center in France was destroyed by fire. Eight persons are accused of this destruction, we still don't know when the trial will be. 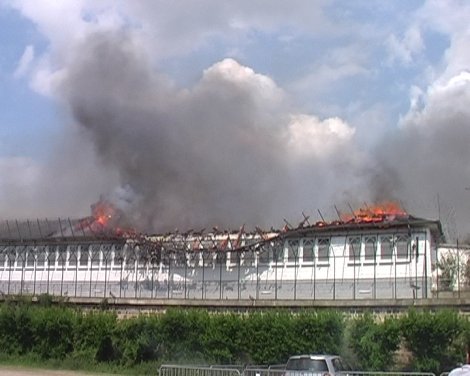 Since the end of 2007, the detainees of Vincennes’ center detention of migrants (France), like many others detainees, have ceaselessly struggle for their freedom. They have held demonstrations and gone on hunger strike, they have refused to be counted or to go back to they room, they have set they mattresses on fire.
The 9th of April a detainee of the center was already saying: “we have to think the struggle differently. People and cops don't give a shit about hunger strike. They don't give a shit about sans-papiers. They don't give a shit if we choke. People eat razor blades every day and nobody hears about them. The little things we do aren’t worth it. We have to do something bigger to put them under pressure.”
The 21th 2008, a Tunisian called Salem Essouli died because of a lack of medical care. The following day, a silent demonstration organized by detainees was seriously crushed. Then a revolt blew up, and the center was destroyed by fire. That night, the detainees were transferred in others centers all over the country. Salem Essouli's family pressed charges in January.

The center of Vincennes use to have 280 beds (the bigger center in France), its destruction means less arrests and deportations. During the following months we could observe a clear diminution of raids. That’s why the State hastened to build a new center in the same place, which opened in November 2008.

The State have arrested several of ex-detainees of Vincennes: two were arrested the day of the fire. One is a legal witness, the other has been detained; six other arrests occurred during the months of July, October, November and December. One of them has been attacked in jail on November 4th and is still at the hospital with serious medical consequences.

Therefore, eight persons are accused of destruction of public good by fire and violence against policeman. At the end of February and beginning March, four of them have been freed but are still accused and will be judged. Three persons are still detained despite the numerous requests of liberation made by their lawyer. We still don't know when the trial will be.

The Vincennes detainees' revolt isn't remote. It happened before, it happened during the summer at Menil Amelot, Nantes, Italy, Belgium, and it will go on and on.

The Vincennes detainees have destroyed their jail. To sympathize with the detainees accused means to struggle against migration politics, their ideology and their practices!

We won’t give in / we shall onvercome!

Free the Vincennes detainees! Suspend all legal proceedings against them! Close the center of detention of migrants! Demand freedom of movement and installation!