The United Campaign Against Police Violence has called a national demonstration to highlight the issues of police violence and demand justice for those who have died in police custody.

The police tactic of "kettling" demonstrators - essentially detaining protestors and bystanders without charge - will be turned on its head on the protest, when we kettle New Scotland Yard. 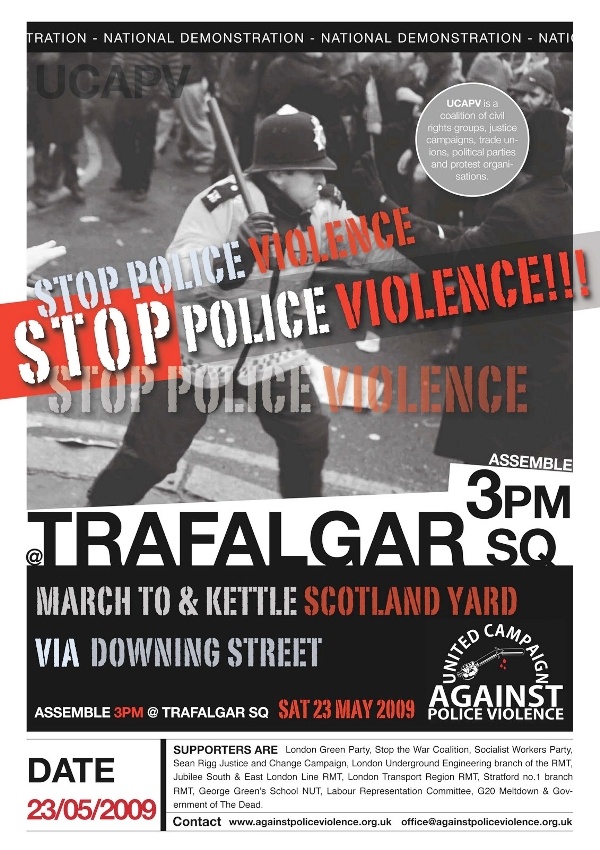 Protestors will demand the disbanding of the Territorial Support Group, the resignation of "Independent" Police Complaints Commission chair Nick Hardwick, justice for those killed in police custody and for the right to protest.

John McDonnell MP, chair of Labour Representation Committee, said:
"Increasingly, evidence demonstrates policing of major demonstrations has got out of control and specialist police units have been acting with virtual impunity.

"This campaign is about achieving democratic control over policing and securing protection from state violence and harassment for members of our communities."

Mark Serwotka, General Secretary, Public and Commercial Services union, said:
"The right to protest is a fundamental right which in these times is more important than ever. That's why everyone should support this campaign to ensure people can protest without the threat of brutality."

The Sean Rigg Justice and Change Campaign, said:
"We believe in standing up for our moral and human rights and for speaking for our loved ones who can no longer speak for themselves - Christopher Alder, Brian Douglas, Roger Sylvester, Azelle Rodney, Mikey Powell, Ricky Bishop to name a few... They are among thousands who have received no justice for their death and their blood is crying out from beneath the grave - these lost lives must not be forgotten, their cases need to be re-opened and re-examined, like that of David Oluwale, so that true justice can prevail.

"For Sean Rigg, Paps Ullah, Ian Tomlinson and many others we expect independent investigations that are robust, fully competent and unbiased towards the police in their search for the unequivocal truth - the IPCC are not fit for that purpose . Overall we demand full accountability of police officers who kill due to violence or negligence - why should they have impunity from prosecution? No Justice, No Peace!"

Jenny Jones, Green Party member of the Greater London Assembly and Metropolitan Police Authority, said:
"This is a demo with a difference - we are going to show the Met that we are tired of the illegal imprisonment that they call 'containment' and that we want them to change their attitude to protesters and become law abiding themselves.

"Change is hard, but the Met is losing public confidence and it's time they understood that their job is to reduce violence, not add to it."

Chris Nineham, Stop the War Coalition, said:
"What happened at the G20 was part of a trend. In recent months the police have attacked many of our protests. They have raided the homes of people who came on our demonstrations in solidarity with Gaza. They are trying to prosecute others who protested against George Bush's visit in 2008. This is a very important demonstration because the attempt to criminalise protest and intimidate protestors must be stopped."