I've just come across the following piece on the BBC site. A slightly different take on the usual reporting of a dragged up Pride. An interesting read, I agree Pride is becoming too commercial and a calendar date like music festivals, there isn't much left about lgbt struggles. This idea that we should brush the political element of Pride aside because 'times have changed' is absurd. We still have battles to fight all over the world. Gay marriage in America, persecution in Iran and Zimbabwe. Pride needs to be reclaimed or an alternative created but would the 'gay clubbing' generation of today even attend such an event? 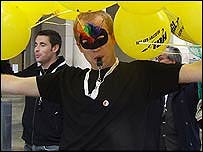 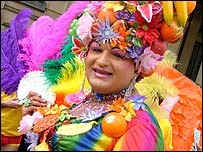 It’s that time of year again when the grey hues of Birmingham are temporarily washed away in a sea of vibrancy reflected by the bold colours of the rainbow spectrum; as the city plays host to one of the country’s most hotly anticipated gay and lesbian festivals.

The Spring Bank Holiday sees the return of Birmingham Pride, a celebration of identity and alternative lifestyle for the region’s LGBT community.

This year’s event is being co-ordinated by Birmingham Pride Ltd, a not-for-profit organisation. Headed by city businessman Lawrence Barton, the 2009 event is expected to be the most inclusive festival ever staged for the lesbian, gay, bisexual and transgender (LGBT) community in Birmingham.

Birmingham Pride will launch from Victoria Square at 1pm on Sat 23 May, starting with a political rally and entertainment followed by an official civic send-off. The procession will then set off at 2pm along New Street, making its way to the Gay Village quarter for festival-goers to continue the celebrations.

“Pride and everything it represents is vital for the gay community here in Birmingham,” explains Richard Keddie, manager of city centre gay store, Prowler.

“As the largest key independent retailer we are providing the community with a shop party, go-go boys in the parade and a community stall in the market area on Hurst street.”

Although usually sporting trademark rainbow flags and banners, this year’s festival is spreading a 'pink meets green' message, in the hope of encouraging LGBT folk and businesses to be environmentally friendly. The message will be evident in the parade as hundreds of people make their way on foot alongside lavish motorised floats.

The city’s Nightingale club, currently celebrating their 40th anniversary, will be hosting the weekend’s biggest main stage acts - including S Club, Sonia, 3 Mix, Sean Rumsey, D:Ream, Booty Luv, Katrina Leskanich and Blazin Squad – while the co-operation of over 15 other gay bars, clubs and businesses has ensured revellers will have a Village Green, market and community stalls, dance arenas, funfair rides, a cabaret and comedy marquee and a ‘Pride’s Got Talent’ competition to enjoy.

“We're supporting the Nightingale and a host of top acts will be appearing there over the weekend. The shop party will be a big affair, with special guests, free giveaways and lots of drinks.”

“For us, the 'party circuit' is where we thrive,” added Richard.

Also joining the grand parade is charity ABplus, who work with individuals living with or affected by HIV. For project worker Andy O’Malley, Pride provides the perfect opportunity to raise awareness and assist such a huge number of people in such a short period.

“We are having a joint float this year with THT and Freshwinds, the two other main charities in Birmingham which support HIV positive people. It will show the community that we work closely together and can signpost each others work in order to provide a wrap-around service for people who need us.”

“Pride has always been important to ABplus as a way of making people aware of who we are and what we do although we support all people who are HIV positive many of our members are gay or bi-sexual. It gives us a chance to go out and meet part of the community of people that we serve and make ourselves aware of many of the other community groups work which we may also access on behalf of our members.”
Festival organiser Lawrence Barton has suggested Pride “is no longer a gay protest or political event,” citing how times have changed, but many of those participating in the celebration, including Andy O’Malley, feel it should still retain its community atmosphere.
“Pride should always be a celebration of 'gay and lesbian culture' and as such will always attract money from businesses and companies who want to promote their services and goods. I think that as long as there is a community side to the Pride festival which showcases the small LGBT groups that support each other through the year, each should be able to sit side by side quite well”.
His sentiments were echoed by David Viney, Development Worker for the Birmingham LGBT Community Trust.
“Pride is a commercial ‘party’ festival. They do make effort to include community groups, usually with stalls and they do have a community area. The event tends to be very mono-cultural in its entertainment and ethos though and could try a little harder to be more diverse and inclusive in its output. The community green area is welcome and seems quite interesting this year,” he said.

“I do believe that Birmingham City Council could offer more financial support however as the LGBT community bring a lot of revenue into the city throughout the year as well as providing a vibrant nightlife to the city which would otherwise not be there,” added Andy.
In recent years, the organisation and success of Birmingham Pride has struggled with businesses pulling out, disputes over financial backing, trouble with funding and bad weather. Yet, the consistent looming threat of cancellation has so far failed to materialise and revelers have largely hailed the event as a consistent success.
However, to ensure its future, it is expected to build on its good fortune and hopefully equal the grandiose and success of Pride celebrations in Brighton, London and maybe even of major cities abroad. Community Trust worker David is optimistic:
“I hope the event is a success, as Birmingham does need a celebratory street festival, but I sometimes think the whole concept of Pride is quite stale and maybe the city should go back to the drawing board and try something new.

“Birmingham doing something different before another city, now that would be brave and welcome.”

So here’s hoping the promise of ‘bigger and better’ holds this year as Birmingham Pride takes its hold on city streets over the weekend.

That said, if there’s very little to propel the festival into the realms of ‘world renowned’ by the end of the month, then I’m pretty sure most will settle, as store manager Richard Keddie puts it, for “good weather and a good atmosphere with minimal trouble - in a nutshell, one to remember”.