Mr Time Martin is a former aid worker who has lived and worked in rebel-held Northern Sri Lanka. He is currently on hunger strike in Parliament Square while at the same time trying to appeal to the Americans at the US Embassy in London. 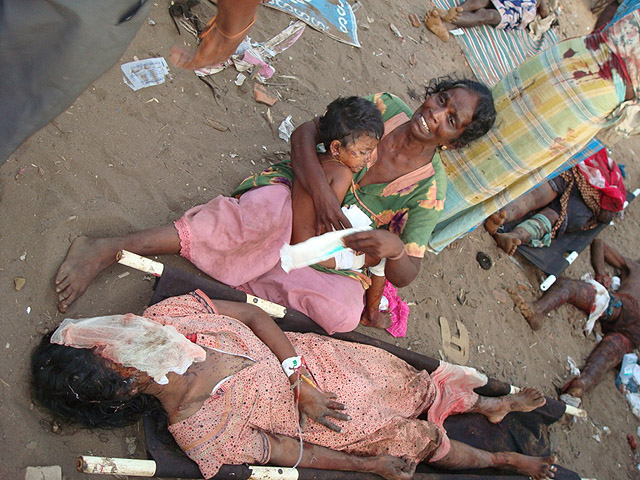 The civilians of Vanni. 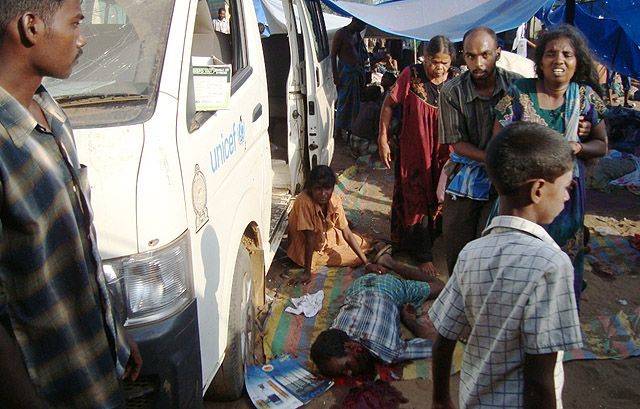 A man is dumped at an IDP camp. 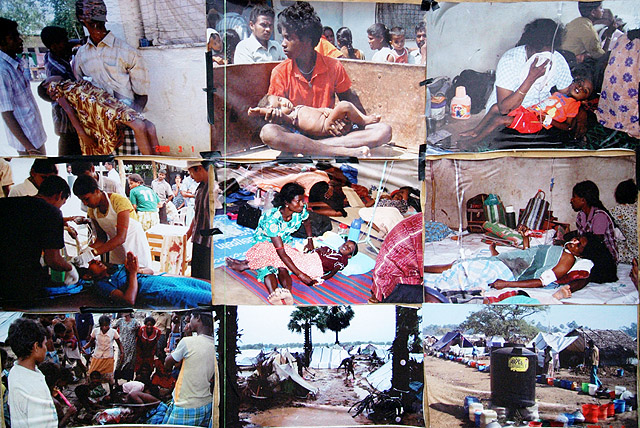 Images of the war on display in London. 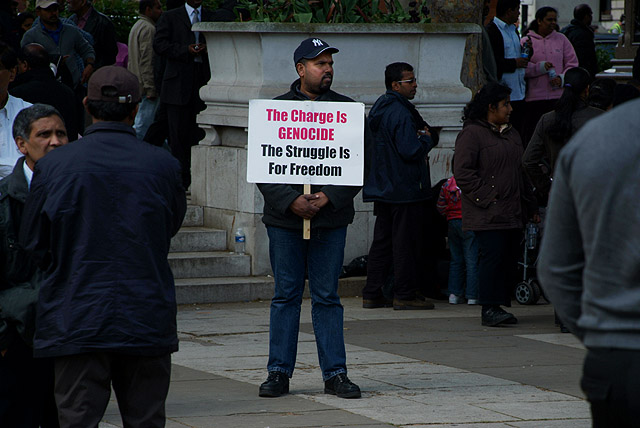 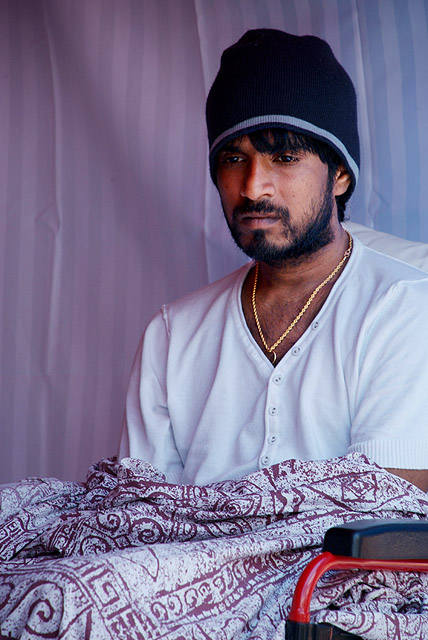 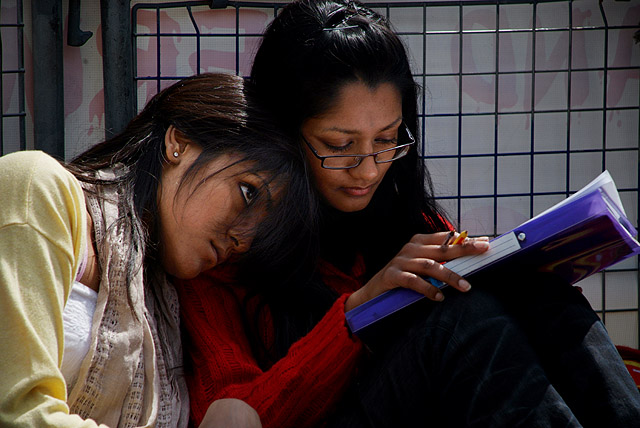 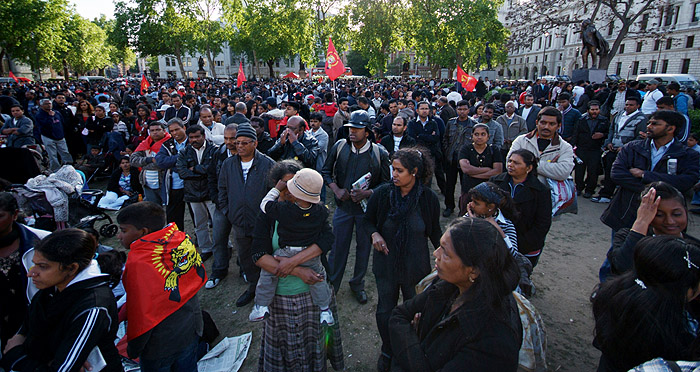 The Diaspora assemble in London. 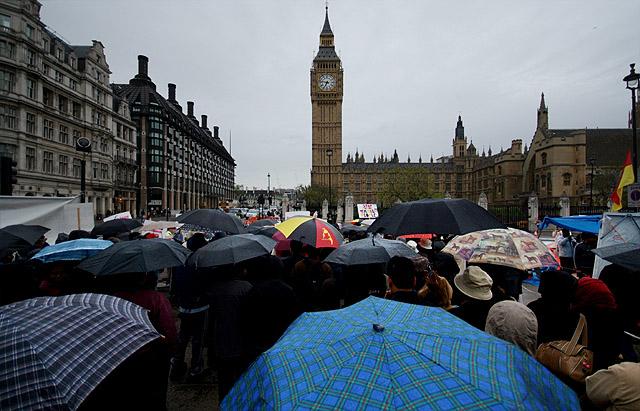 Waiting for an answer! 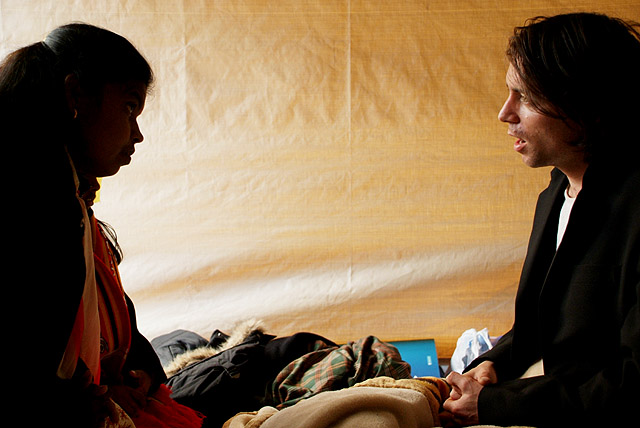 Mr Time Martin is a former aid worker who has lived and worked in rebel-held Northern Sri Lanka. He is currently on hunger strike in Parliament Square while at the same time trying to appeal to the Americans at the US Embassy in London. The Sri Lankan government have recently declared they have defeated the Tamil Tigers of Tamil Eelam (LTTE) and have claimed the death of Velupillai Prabhakaran, the Tamil leader. Since the government of Sri Lanka (GOSL) launched its operation, the Tamil people have been moving en-masse away from areas of fighting. Scores are reported dead and many missing.

UN Secretary General Ban Ki-moon is to visit the island while around him the international Tamil diaspora carry out global protests including here in London, which has been ongoing for two months.

In recent weeks the United Nations have stated that they believe the dead to number 6,500.

"What about all those the UN never saw or couldn't vouch for?" Says Tim.

"Ever since the UN came up with those figures there have been days where a few thousand people have have been killed in one day! I would say its well under-estimated. The true figure before the final assault is about 10,000. With the final assault, it could be anywhere between 15 - 20,000. That's realistic."

Its widely reported that the total dead from the entire conflict is now 70,000. Is that right?

"They've been going on for years about this figure of 70,000 people being killed in this conflict. This 70,000 figure has been around for ten years. The Sri Lankan government themselves have been lying about the true numbers of army soldiers that have died on the front-line. Up until recently, they didn't actually pay widowers for their husbands if they were missing in action. They had to change the law to give these 'missing in action' payments. If you look at the government figures, how many of these thousands are supposedly 'missing in action'? They are actually burying their own soldiers on the front-line and not actually declaring how many of their own people have been killed."

"We have reports of large craters being dug. Some of these reports are coming from credible sources. That's why we're asking Obama to move these satellites into position, just so we can really see whats happening. We've had reports of thousands of people being killed in this final assault. The Sri Lankan government have been continuously lying about the number of civilians in that area."

"Now that the war is over what kind of future are they [GOSL] putting forward? At the moment there are thousands of people unaccounted for, a number of IRC (International Red Cross) staff that are missing. A number of doctors are missing including Dr. Varatharajah and Dr Sathiyamoorthy. Both men have been commended for bravery."

"You've got to ask yourself, where have all these people gone now? Obviously they've all been killed by these multi-barrel rocket launchers, air-strikes and the defence systems. The government have been firing these rockets twenty four hours a day."

"I was there when the current conflict started. These people have lived with it their whole lives and being there and witnessing it first hand, I saw how things really are in Sri Lanka. When I got there, they [Tamils] had a proper ambulance service, a health service and administration."

"I was very surprised to see this very humble nation with very peaceful people. They had just been through twenty five years of civil war. They weren't driven by the capitalist world of money, desire and greed. They haven't been bombarded by advertising."

"The second year I went out things had started to get a bit rocky. The civil war started, a few days later there were air-strikes. Then a few weeks later they started the multi-fire rocket launchers. They were firing twenty four hours a day, seven days a week. Forty five rockets every twenty five seconds. So its like psychological warfare. People were finding their beds vibrating, the windows cracking."

"These people have had to suffer so much. They are crying their eyes out not knowing if their brothers and sisters are alive or dead. Most of these people here [Parliament Square Tamils] have got relatives over there. They don't know whats happened to them."

"and this is the most horrific and painful thing..."

"Imagine you grew up with your brothers and sisters.and you go through horrendous times in Sri Lanka through previous wars. And then you, the lucky one, get away from that. All These years you've been sending them money to make sure they are OK and then this war starts. And then you don't know. Its just such torture, especially if its your little brother or sister. You feel like you have to protect them. And each day your seeing images. Each day these people are looking for any bit of footage they can just to see if their relatives are dead. They are looking for every dead body. just so they know. The idea of not knowing if your family is alive or dead, is worse than actually knowing."

"This is such trauma that's been inflicted not only on Sri Lanka but on the entire diaspora around the world. And that's why this war could never have been won militarily. It could only have been won with a political solution."

What chance is there for the Tamils to re-enter back into Sri Lanka itself now that the military operation by the SLA (Sri Lankan Army) has apparently concluded?

"The funding for the LTTE was running out. This is obviously from Tamil sources that have heard this. Only the older generation were funding the LTTE. The younger ones below thirty wouldn't give a penny to the LTTE. But this has brought it home. Its just made the international support ten times stronger and its made the funding ten times the amount."

"But what you'll find, that even if the LTTE are destroyed. Your going to be in a bigger problem. Your going to have a hundred groups that take its place and then you've got no control over any of them. Some of them might have their own agendas. You'll never be able to resolve it. Your not working with one organisation or group, your working with a hundred but your not working with them...do you see? They've just fuelled another thirty year civil war by what they [GOSL] have done. the younger generation that are growing up, they haven't suffered like their parents."

"You've got to remember, because the LTTE had asked each family for one from each family to come forward, every single family in that area had a member of the family involved with the LTTE."

While in the North, do you recall any event, or sequence of events that may have triggered this final assault?

"The Sri Lankan government were working hard before the war started to make sure the LTTE were proscribed as terrorists. It meant they could kill as many civilians as they wanted in the name of a war on terror. Its not a war of terror, its a war on terror on the people. The LTTE were building up their arms and so were the Sri Lankan government, and both sides conceded what the other side were doing."

"Certainly there were some problems in the south. Karuna had got separated from the LTTE. The bottom line is that the government clearly wanted to go back to war. They built up over a number of years the political support from China, Russia, Pakistan and Iran. They were preparing for a final assault and they were very cunning in the way they played the International Community off on each other."

"What we have to look at here is firstly the government were claiming that they were on a humanitarian mission to rescue the population. Who were they rescuing these people from? Themselves?"

How was the final assault understood in Sri Lanka itself?

"I have friends in the south. Tamil and Sinhala friends that live in government controlled areas of Colombo. Some of the Sinhala friends say to me, they think its so bad what has happened to the Tamil people: obviously they are upset with what the LTTE have been up to in the south, that the civilian population is really suffering. But they also understand where this conflict has erupted from. Its because they haven't had equality."

Whats a realistic estimate of the damage done so far?

"One week over the Christmas period, not this Christmas, but the Christmas before. there were over twenty five burials. This is just a small town. During the final assault, the army were advancing but what they were finding was they were losing a lot more people generally from mines and booby traps. I would estimate between thirty and forty thousand each side just in the last few years, minimum, that have been killed. This is the figure that other aid workers have been talking about. Even when I was there you see how quickly the graveyards are filling up. Suddenly there's five hundred here, five hundred there, five hundred here. Those five hundreds are quickly adding up. Thats not including all the ones buried on the frontlines."

"You've got to remember that people have been burying their dead as they go. People have been living in lots of different areas: they haven't been bringing them to hospital. The safety zone was a bigger area before the government entered. When people started getting killed, there was no-one there to confirm the exact numbers. Those numbers are the numbers that the UN staff can actually vouch for."

Tim is calling on the International Community to observe the following:

1. Internatioanl monitors on the ground and satelitte imaging, effective immediately to verify the true number of casualties and the mop up process.

3. Emergency medical treatment for tens of thousands of civilians and POW's that are currently not in hospitals and are being held in checkpoints, schools and IDP (Internally Displaced Persons) camps.

4. Public investigation into Vijay Nambiar, the special envoy for the UN Secratery General, as his brother, Staish Nambiar is a paid consultant for the Sri Lankan government which suggests a conflict of interest.