Dateline: London, UK, Sat 23 May 09 – Economic meltdown for global capitalism, political meltdown in both Houses of Parliament, so Meltdown called a SACK PARLIAMENT! protest at short notice – and multi-Guy-Fawkes miscreants, Mister Mayhem, a Red Dragon and dozens of protesters, accompanied by Ian Bone on clown car horn, descended on the Palace of Westminster to blow the fetid, corrupt institution sky high... with GUNPOWDER! 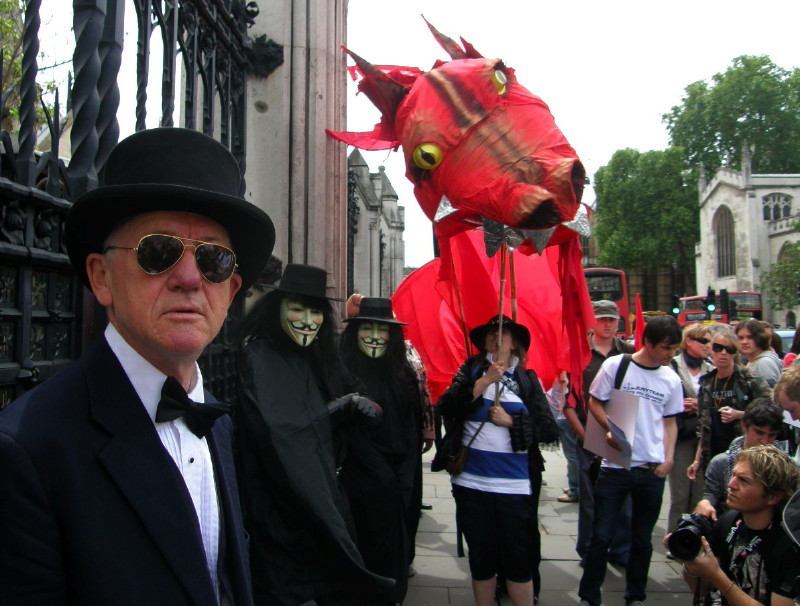 A. Mister Mayhem and multi-miscreant accomplices 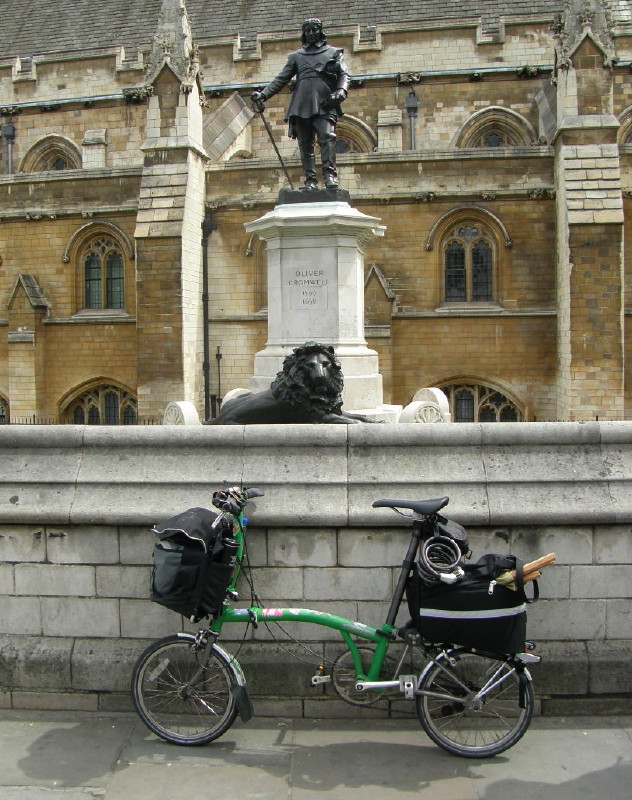 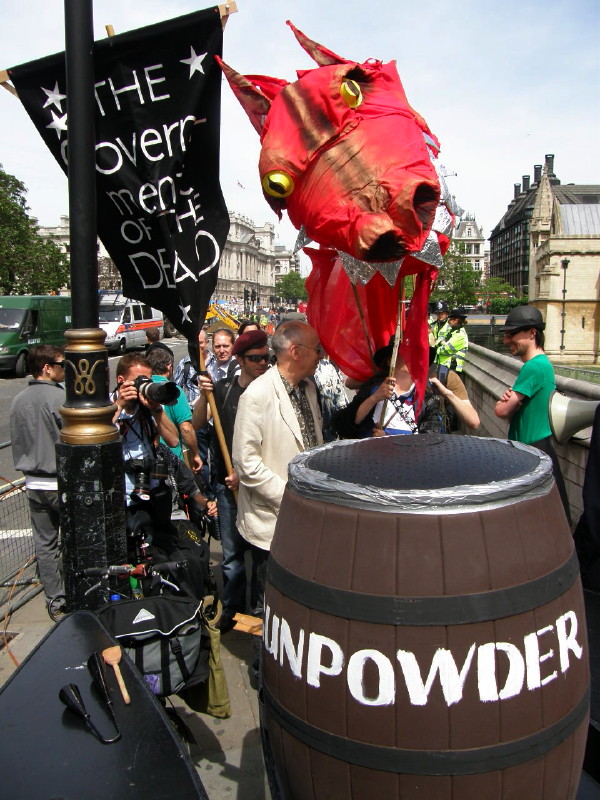 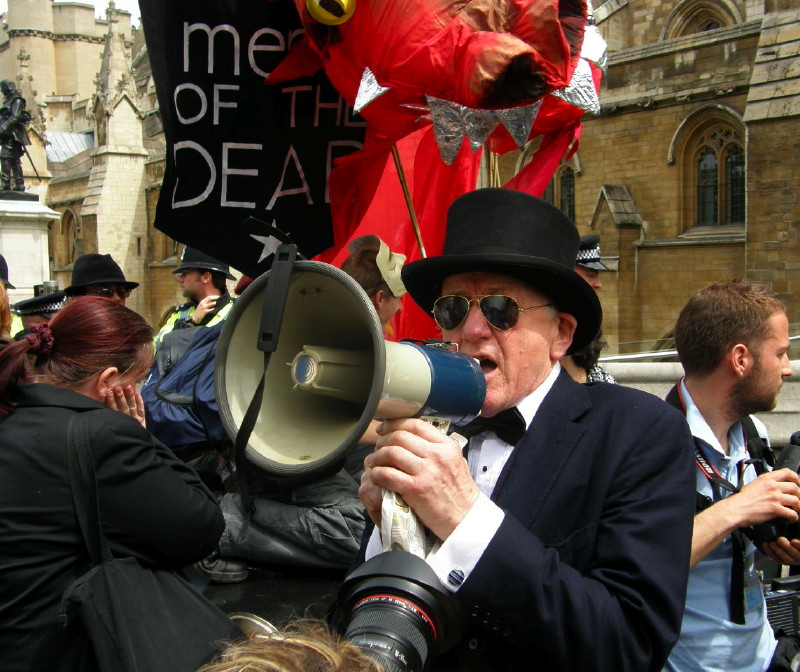 D. Error – Parliament corrupted – "ALL of them must go!" 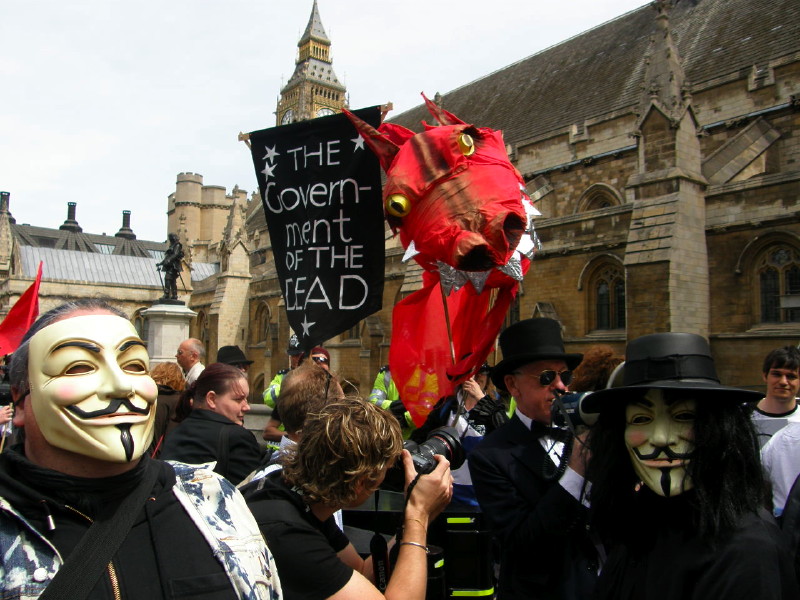 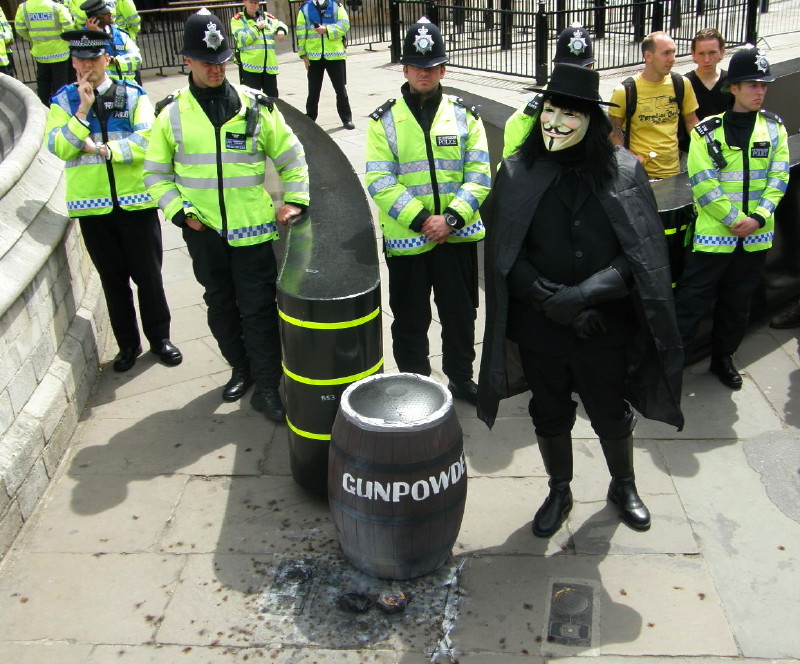 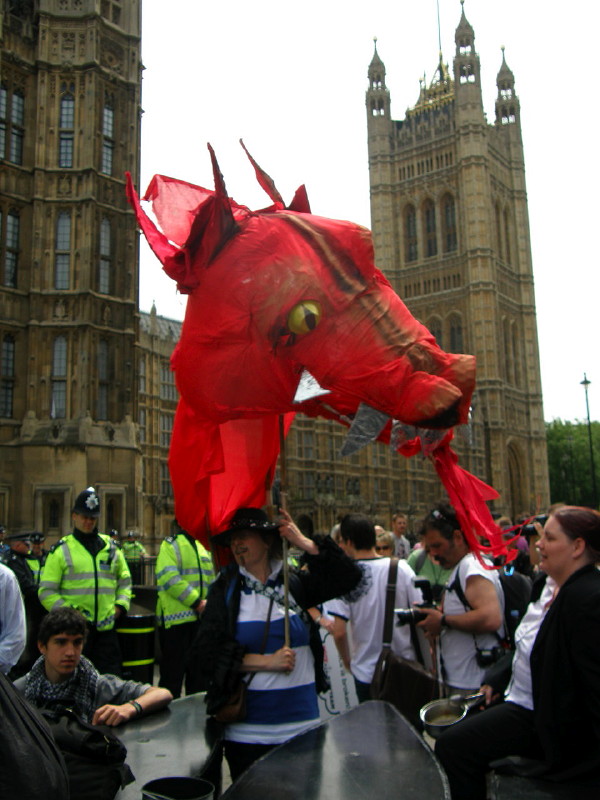 G. Fawkes and the Dragon 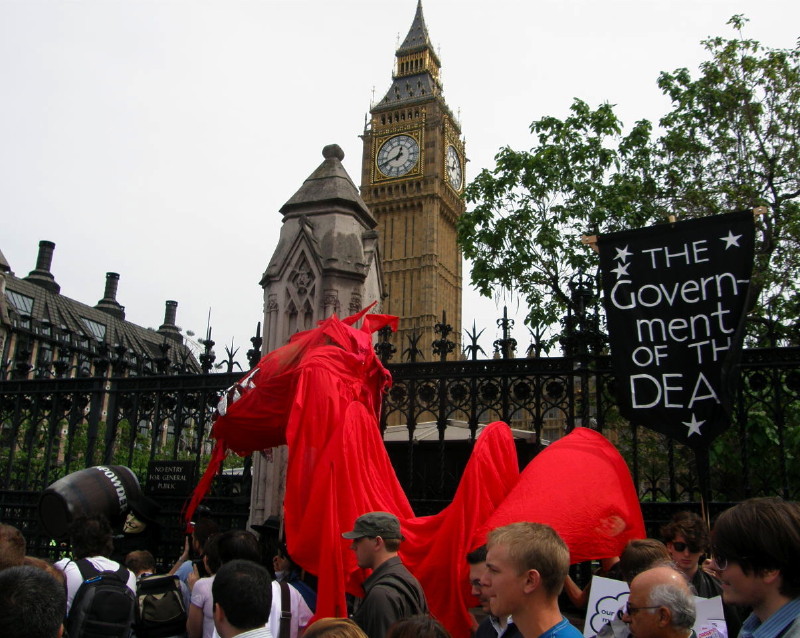 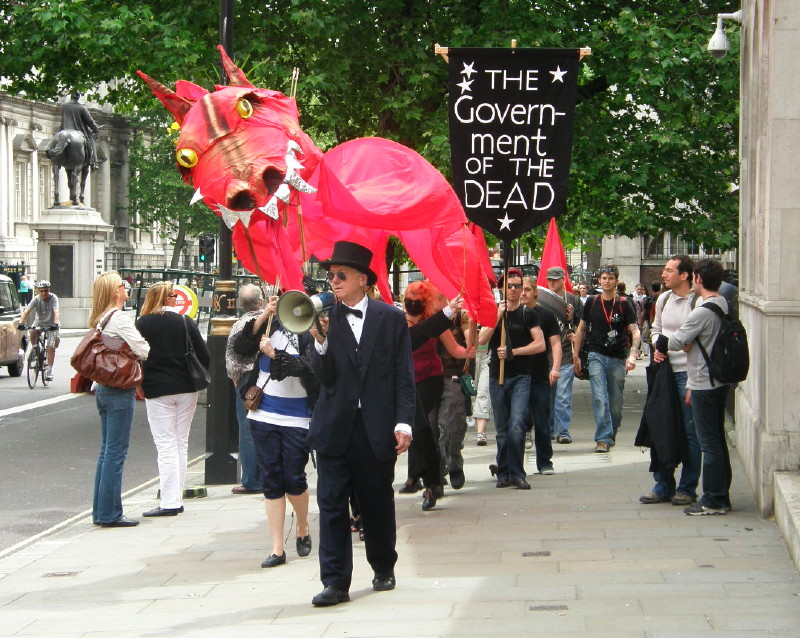 Despite a lacklustre attempt by coppers in shirtsleeves to unreasonably detain and thereby delay their arrival, the Government of the Dead contingent arrived (by foot and folding bike) promptly at 12:00 noon at the protest rendezvous point – the statue of well-known Parliament sacker Oliver Cromwell, outside the Palace of Westminster. A "V for Vendetta" togged Guy Fawkes carried a big barrel clearly labelled as containing GUNPOWDER toward the public entrance at St Stephen's Gate, set it down, and watched as the slow fuse was lit – non of which much troubled the attendant cops, who singularly failed to check the contents of said barrel. Alas, the only gunpowder in evidence erupted in a cacophony of crackles and clouds of smoke as a firecracker pack burst into life.

Despite the ubiquitous and righteous public anger at fraudster MPs on the make and corrupt Lords on the take, the protest's short lead time meant our numbers on the ground were too low to successfully back up an attempt to smuggle gunpowder inside the Houses of Parliament. Undaunted, Meltdown will continue the class war skirmishes at the enemies HQ a week today:

We will meet the MPs returning from their overlong Whitsun holidays on Monday June 1 to perform citizens' arrests of the worst offenders.

Our prime targets include those MPs who have admitted their guilt by paying back their outrageous expense claims: viz Jacqui Smith, Hazel Blears, Margaret Moran, David Cameron among others to be identified.

We will bring handcuffs to do things properly, or hand the MPs over to the police. And we will submit modest expense claims for the handcuffs!"
Source:

No doubt we need a root-and-branch remaking of how we govern our society, replacing the corrupt failings of ruling class representative democracy with the transparent openness of working class direct participatory democracy and political direct action – such as through...

A Government of the Dead production...

A circus performance in which governments fall, Parliament is sacked and politics exceed the wildest possibilities of art...

Four bands + DJs + comperes + poetic justice + live radio on www.ph7.com + samba to shake the House of Commons down
New singles launched: songs for the Four Horsemen of the Apocalypse.
Admission charges: Bankers £1,000; Toffs: £10; Low earners: whatever you can cough up."
Source:

Hope to see y'all at these events and more,

All these photos and video clips are 'CopyLeft'
This means you are free to copy and distribute any of my photos you find here, under the following license:
> Creative Commons Attribution-Noncommercial-Share Alike 3.0 Unported License
>