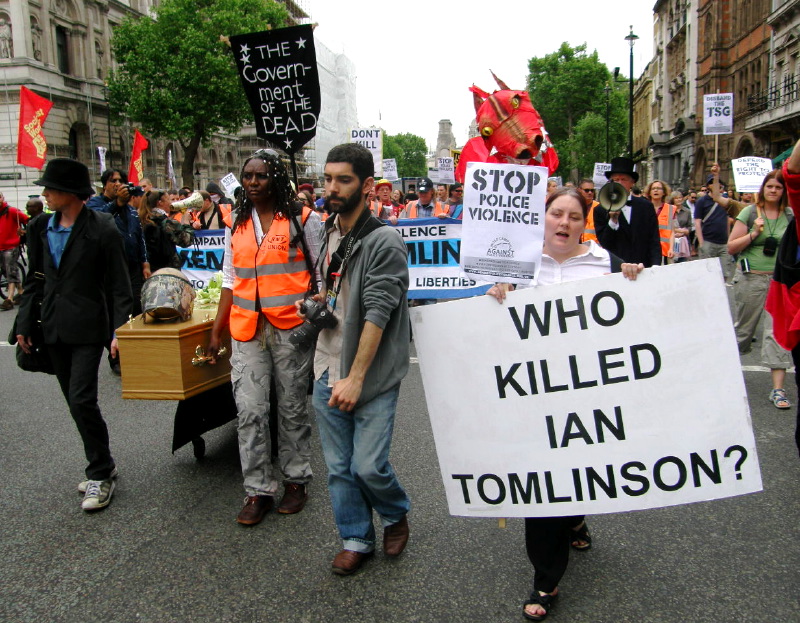 A. Asking awkward questions in Whitehall 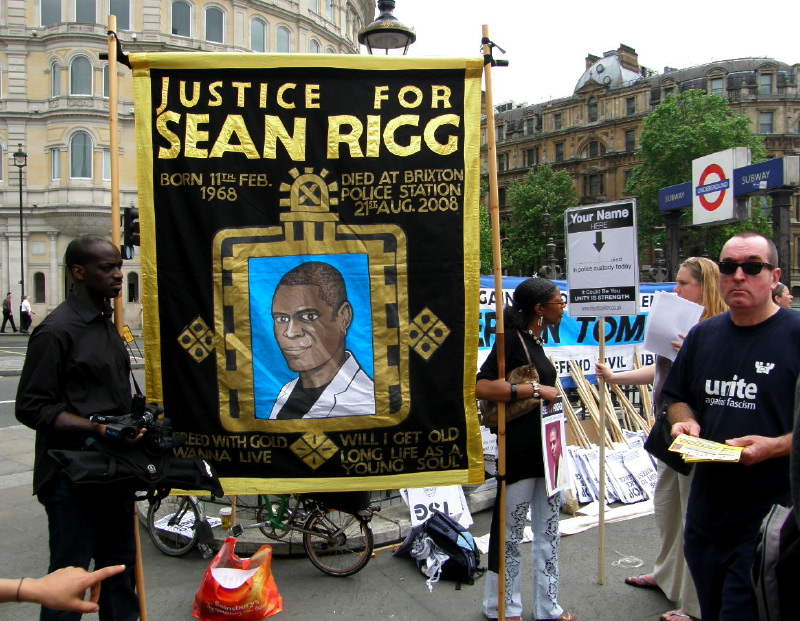 B. His relatives demand justice for Sean Rigg 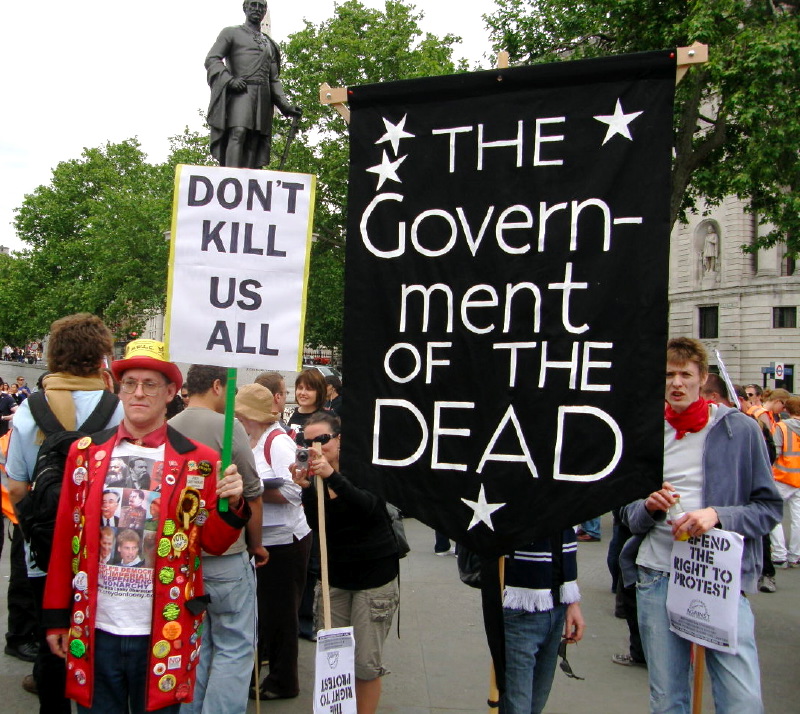 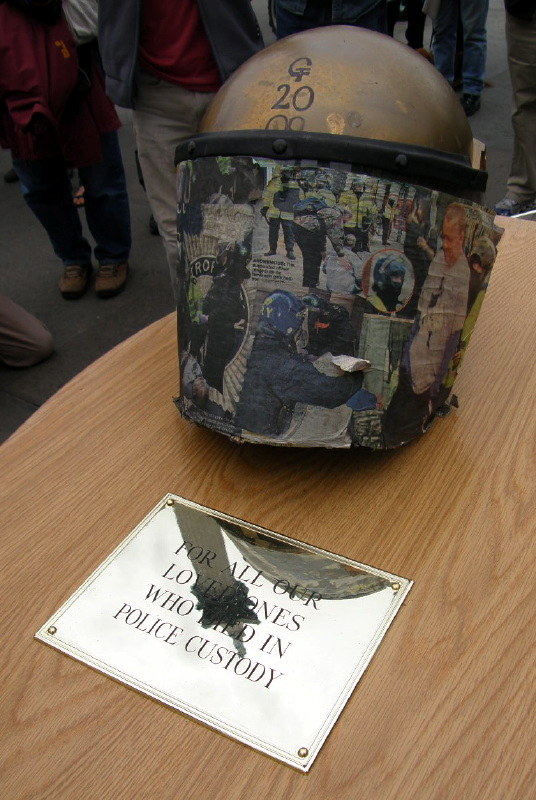 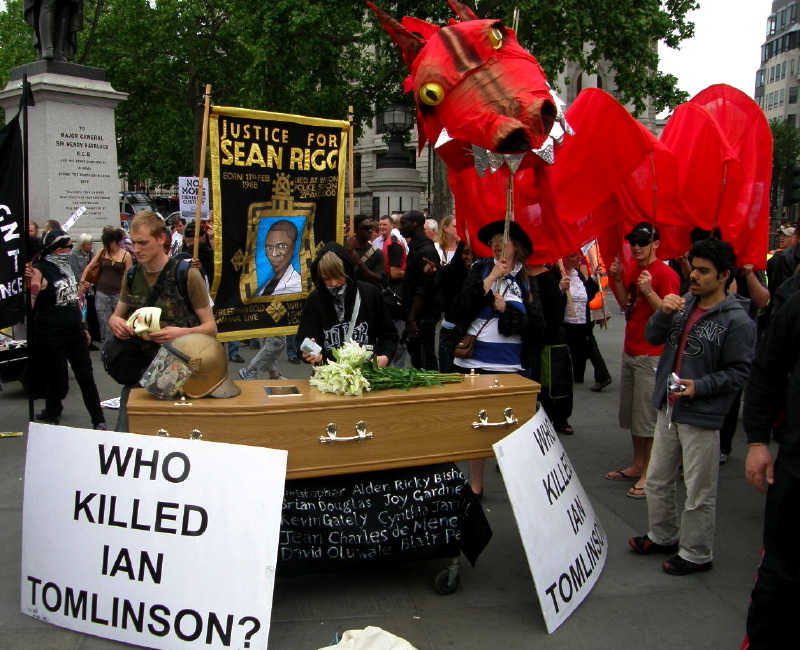 F. A small subset of the names of people killed by the cops 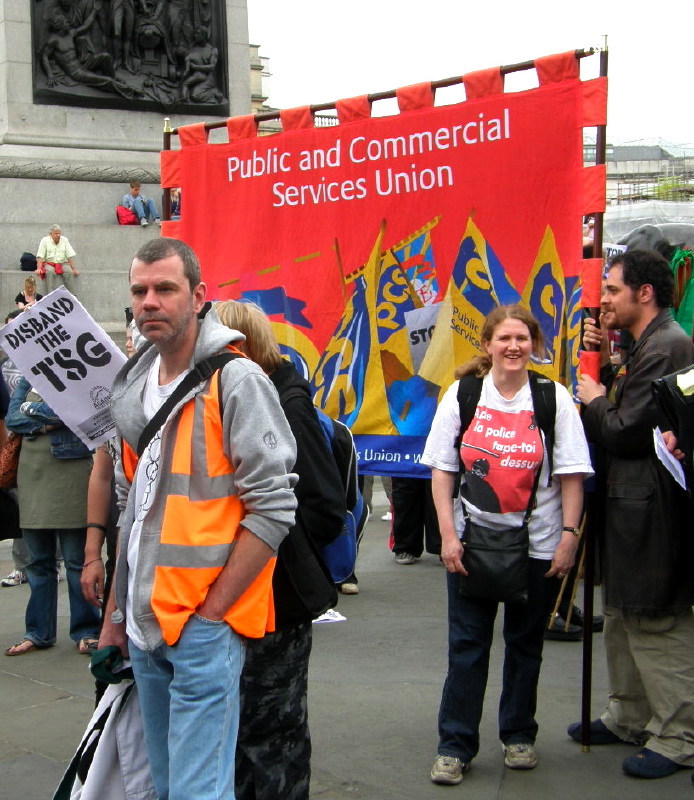 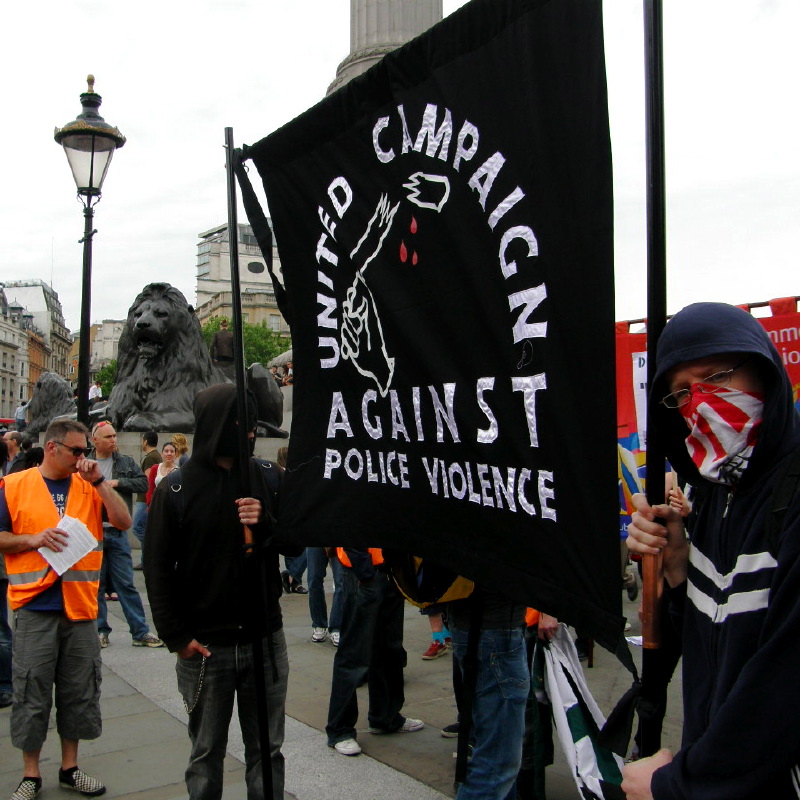 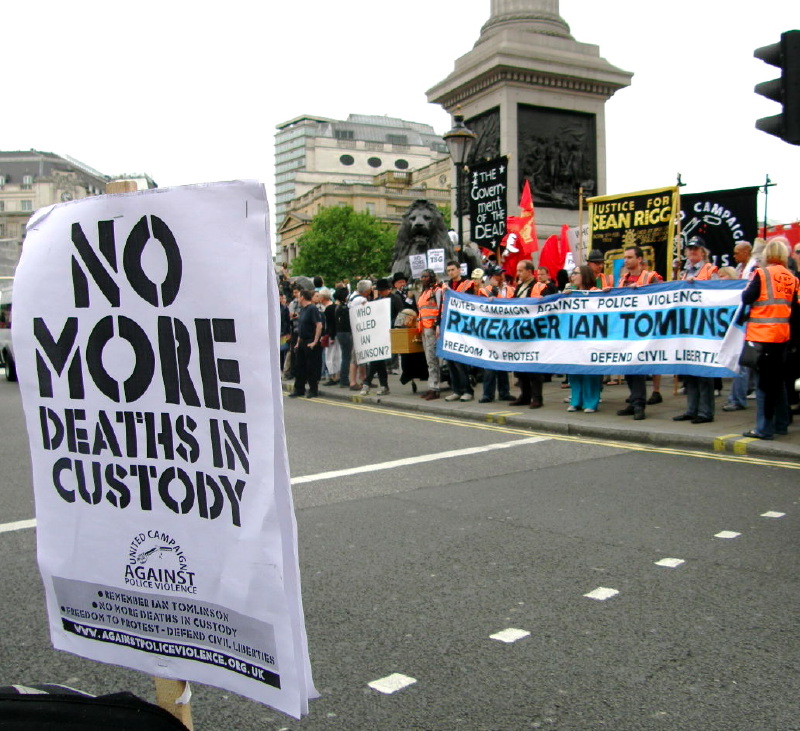 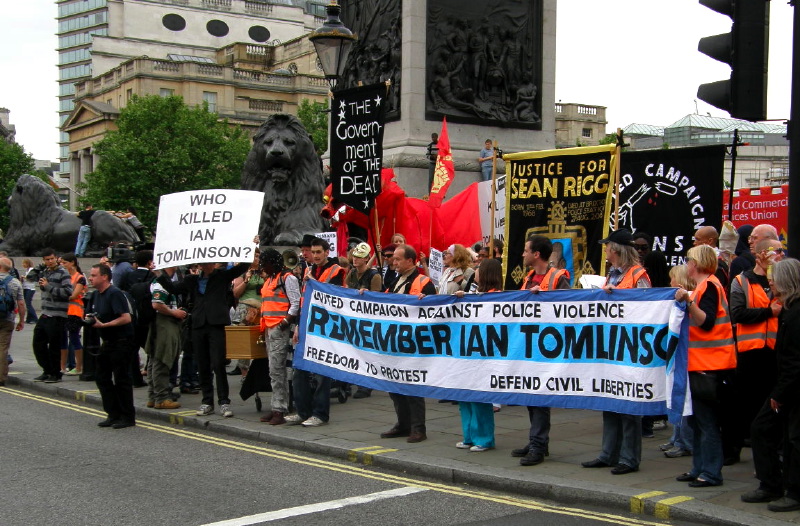 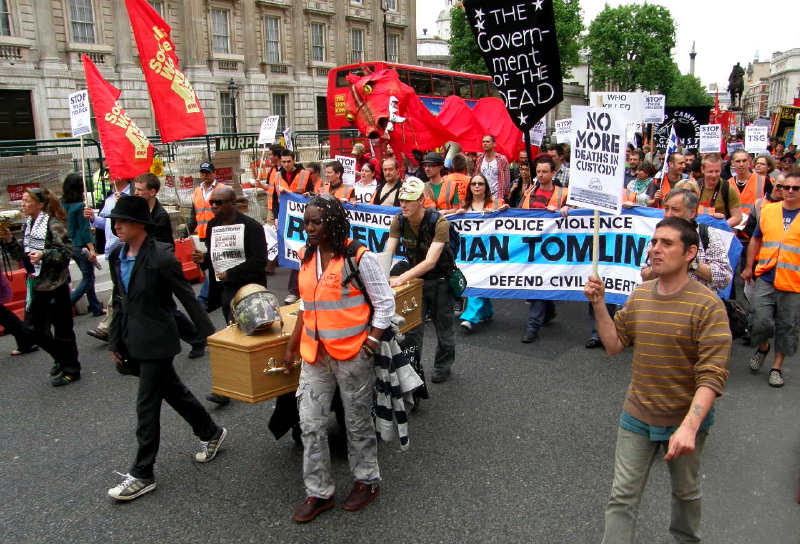 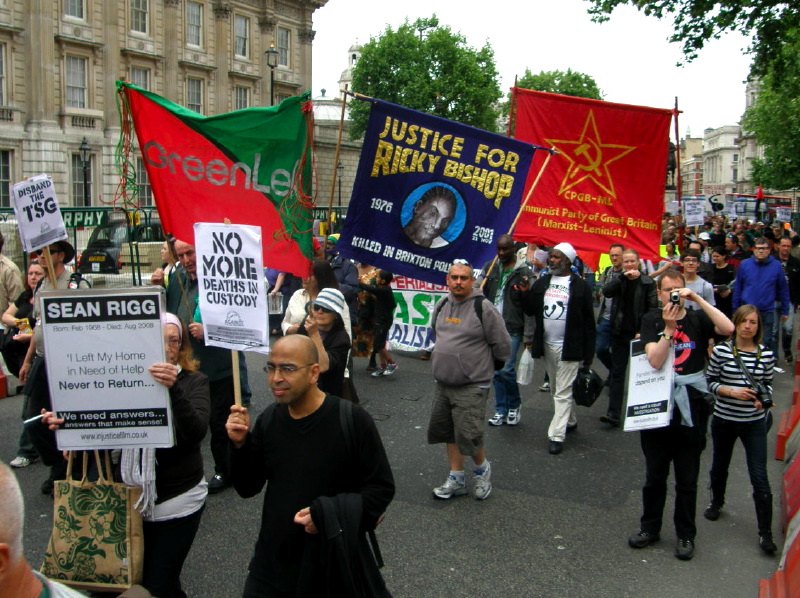 N. Banners and placards get the message across 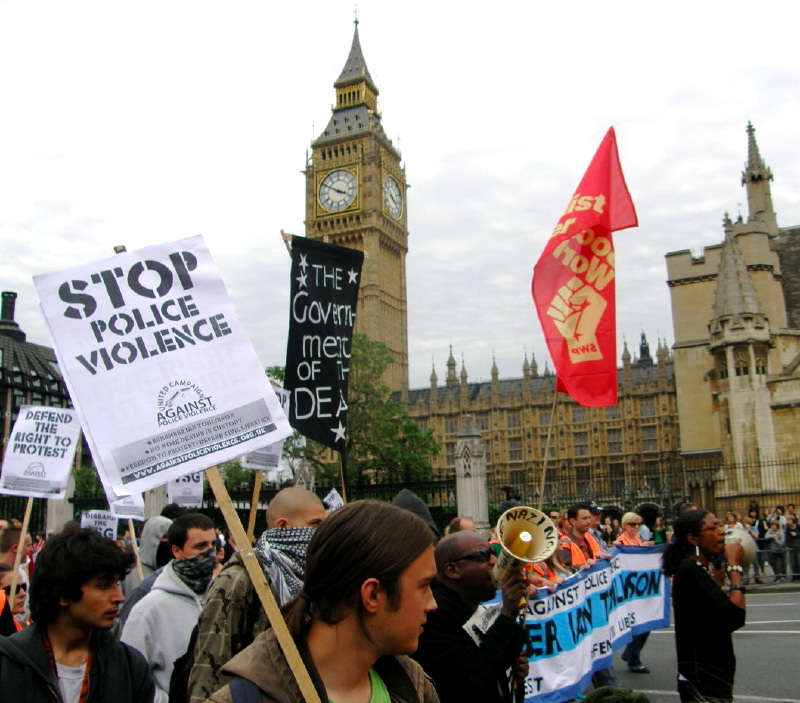 O. Passing the Palace of Westminster 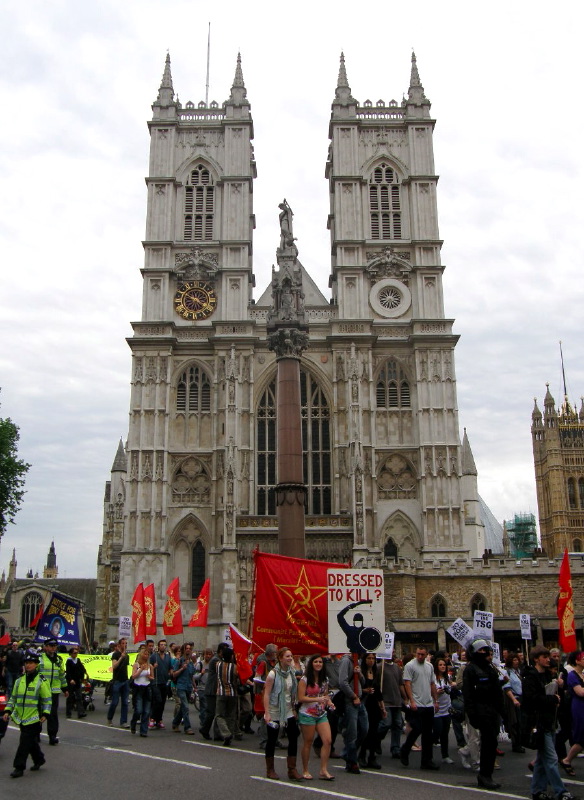 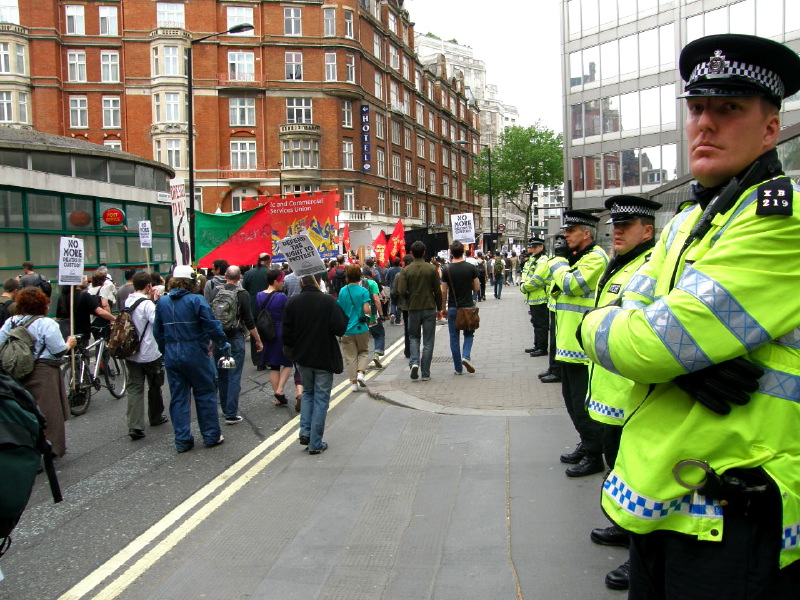 R. Got mah grump on just fer you, protester scum 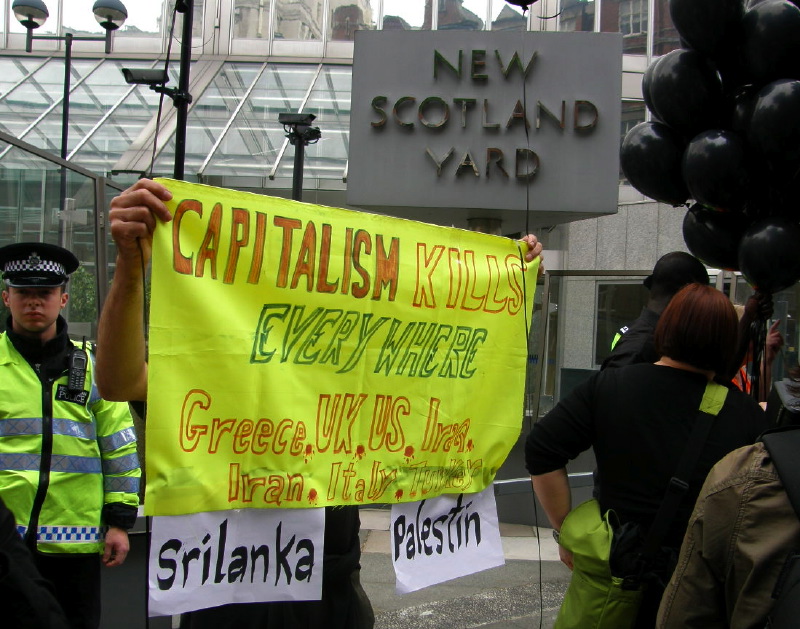 S. Truth-telling under their surveillance cameras 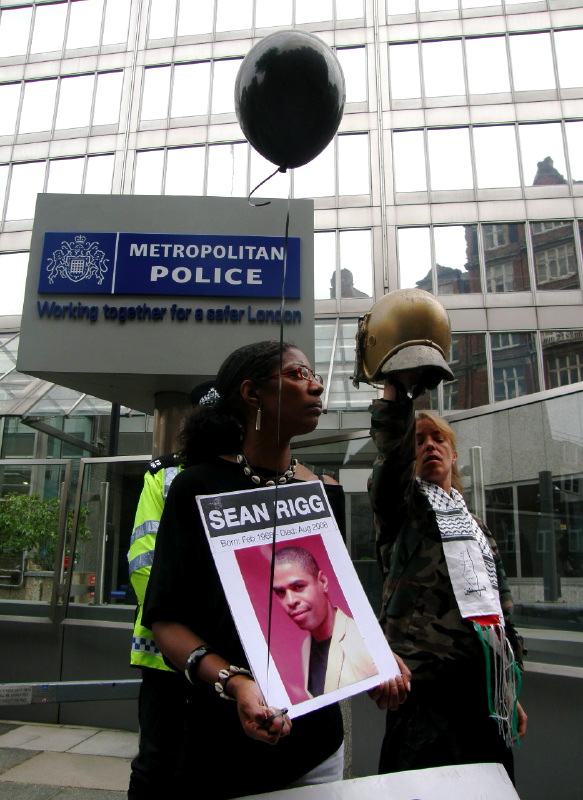 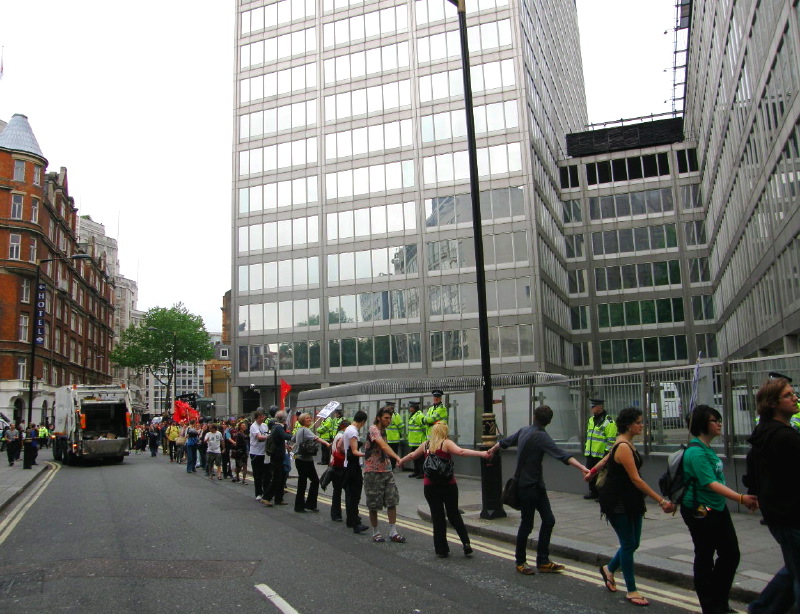 U. Setting out our kettling line on Broadway 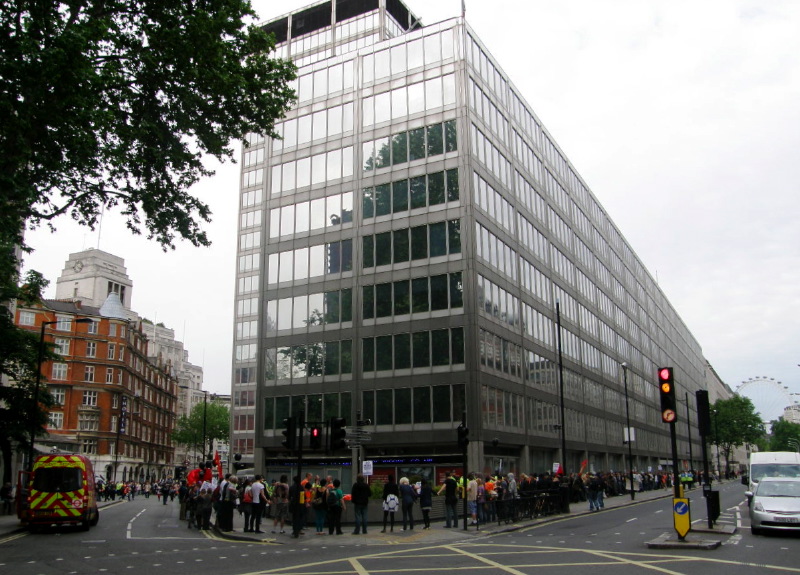 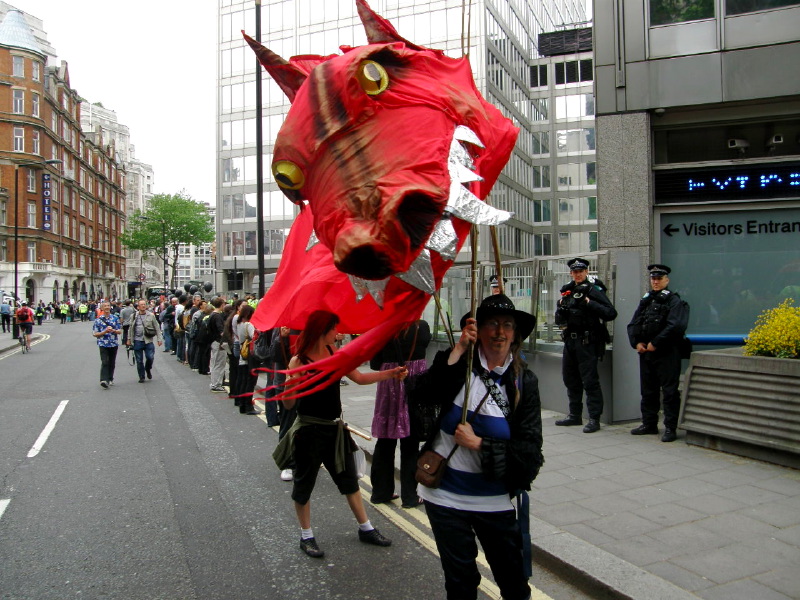 W. The Red Dragon joins in our kettling 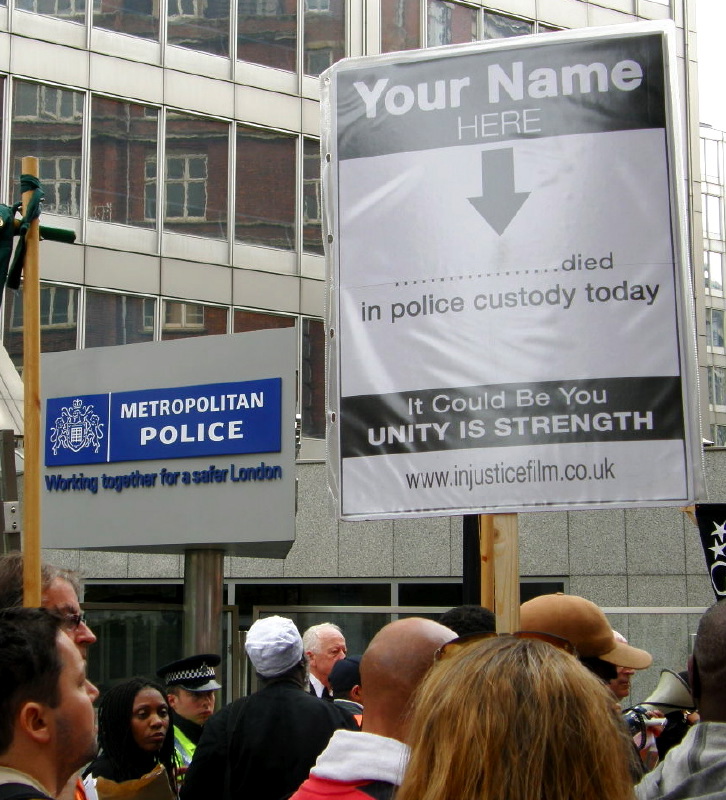 After the very public slaying of Ian Tomlinson by the police on 01 Apr 09 at the G20 protests, a new coalition campaign group called the United Campaign against Police Violence (UPaPV –

http://www.againstpoliceviolence.org.uk ) coalesced to challenge the ubiquity of police brutality and the impunity by which cops who kill citizens get away with it scot free. In short order, UPaPV has brought together protest groups, justice campaigns, political parties, civil rights groups and trade unionists around the slogans:
• Remember Ian Tomlinson – No more deaths in police custody
• Freedom to protest – Defend civil liberties

"In terms of state custody, since 1969, over 2,000 people have died. Which of course makes the police and other sections of the state, apparently more likely to commit murder, statistically, than any other section of the British population."
Chris Knight, G20 protest organiser, the Government of the Dead –

"The United Campaign Against Police Violence has called a national demonstration to highlight the issues of police violence and demand justice for those who have died in police custody.
The police tactic of "kettling" demonstrators – essentially detaining protestors and bystanders without charge – will be turned on its head on the protest, when we kettle New Scotland Yard.
At the end of the protest there will be a naming of the dead for those who have died in police custody, led by the families of the bereaved who have yet to receive justice. Over 1000 people have died in police custody in the last 40 years – yet no one has been found responsible.
Protestors will demand the disbanding of the Territorial Support Group, the resignation of "Independent" Police Complaints Commission chair Nick Hardwick, justice for those killed in police custody and for the right to protest."
UPaPV Press Release.

In the run up to the demonstration, London based UPaPV activists held a vigil for Ian Tomlinson and other victims of police violence at New Scotland Yard on the previous Wednesday evening, for which see my...
• Action Report "Pix-&-Vidz of UCaPV Vigil, NSY – Wed 20 May 09" –

"In 1969 David Oluwale became the first black person to die in police custody in Britain. Many others have died since then. None of the police officers involved have been convicted of these deaths. In this documentary, the families of these victims ask 'Why not?'
I N J U S T I C E documents the horrific loss of life at the hands of the state and it's attempts to cover up these killings. The British police have been responsible for hundreds of deaths and have walked free. The families of the dead want justice and they will not stop until they have got it."
Synopsis of "I N J U S T I C E", 2001 –

There has been no improvement in police behaviour in the last eight years, but countless attempts by Police Federation lawyers to prevent "I N J U S T I C E" being screened (which stopped me seeing it at the Ritzy, Brixton). You can now watch this chilling and uplifting documentary online at

http://www.youtube.com/watch?v=gO4fFfwetJ0
Chris and Colin outline just why hundreds of people are gathered in Trafalgar Square, London, UK for a mass protest against police brutality and murder.
• Chris Knight, G20 protest organiser, Government of the Dead –

Assembling at 15:00 on a sunny Saturday in May, those present showed great enthusiasm for turning the tables on the cops and symbolically kettling the killers in their high prestige London HQ building. The mood was militant, the volume loud, and the temperature angry as we set off down Whitehall, passing the gates at the end of Downing Street which isolate the Prime Minister and Chancellor residences from the citizenry in revolt. You can see the route we took on the...
• Protest Map –

http://www.youtube.com/watch?v=rB7yvMZqKe8
If you'd like to join in with the soundtrack, here's a selection of the call-and-response chants.
• No Justice – No Peace!
• 1, 2, 1, 2, 3 – Disband the TSG! (Tactical Support Group – THE most violent Metropolitan Police unit)
• Met Police, hear us say – how many skulls have you smashed today?
• Say hey (hey), ho (ho) – the TSG has got to go!
• Who are the murderers? The police!
• Who covers them up? The IPCC! ("Independent" Police Complaints Commission – a world class whitewashing bureaucracy, and target of the next UCaPV mass demonstration on 10 Jul 09; see below for details)
• Who killed Ian Tomlinson? The police! (on 01 Apr 09, at Royal Exchange, City of London, during G20 protests, although Ian was just trying to get home from work –

http://en.wikipedia.org/wiki/Jean_Charles_de_Menezes )
• Who killed Roger Sylvester? The police! (on 18 Jan 99, from multiple injuries after being restrained outside his home by eight police officers from Tottenham Police Station –

http://www.rsjc.org.uk )
• Who killed Ricky Bishop? The police! (on 22 Nov 01, from multiple injuries most likely inflicted inside Brixton Police Station –

http://www.4wardever.org/#/ricky-bishop/4528086733 )
• Who killed my brother? The police! (Sean Rigg, on 21 Aug 08, from injuries most likely inflicted inside Brixton Police Station; the inquest into Sean's death was opened and adjourned on Thu 28 Aug 08 at Southwark Coroner's Court –

http://seanriggjusticeandchange.com )
• Who killed Joy Gardner? The police! (on 28 Jul 93, at her home in Crouch End, London, after it was invaded by five police officers, who gagged and restrained her by using a body belt and wrapping 13ft of tape around her head –

Big cheers of mutual solidarity were exchanged with the Tamil protesters as we swung into Parliament Square, where veteran peace camper Brian Haw was also cheered by the demonstrators. Then a short hike up Victoria Street brought us to our kettling target: New Scotland Yard. At the iconic triangular revolving sign ("Working together for a safer London" – a bitter irony for the friends and family of folks killed by the cops), black balloons symbolising all the lives cut short at the hands of the police were distributed. Then the organiser's stewards began encouraging folks to pass right around the building to the left and to the right, to encircle the killers' HQ in a ring of solidarity with our departed sisters and brothers. If only I'd been a wee bit quicker off the mark in mounting my bike, I'd have captured the successful kettling in a single video take, but alas I just missed the moment – but see the end of the "Marching and Kettling" video for a just-post-kettling lap of the surrounding roads.

After holding a minute’s silence for all the people who have died in the custody of the police, the black balloons were released, and soared up the steel-and-glass facade of New Scotland Yard. Gathering together again at triangular sign, we heard speeches from a wide variety of supportive citizens. As Tony Benn has often pointed out, the mainstream media never broadcast the speeches made at demonstrations; but now we have an opportunity to spread the word on the net, so here are those speeches in full, in 6-10 minute segments – which I hope will inspire you to take political action on this issue in the future.


Forthcoming Events
Put these in your diary now, so there's an initial commitment on your part to attend and demonstrate solidarity in practice.


"You can fool some people sometimes,
But you cant fool all the people all the time.
So now we see the light (what you gonna do? ),
We gonna stand up for our rights! (yeah, yeah, yeah!)

http://www.youtube.com/watch?v=wUpGY7VTWPM
• Video: who is hardest cop or action man? video by resistthedaleksrule –

All these photos and video clips are 'CopyLeft'
This means you are free to copy and distribute any of my photos you find here, under the following license:
> Creative Commons Attribution-Noncommercial-Share Alike 3.0 Unported License
>