On May 16th, over 1000 people gathered to participate in the occupation movement festival in Lund, which featured food, music, entertainment and of course SQUATTING! During Saturday two buildings, Bredgatan 4 and Observatory in the City Park were occupied, and during the night so were Sunday two unused buildings on the St Lars. 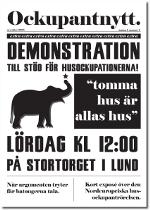 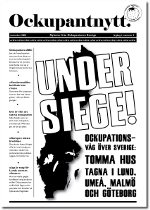 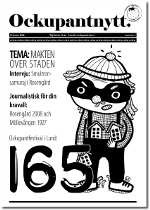 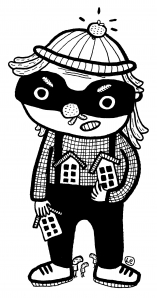 Right to The City!!

In addition to the imaginative tactics the activists used to outwit the cops, different blocks were subject to random and ordered police violence.

Making a comeback to street politics was the re-appearance of padded and white-suited protesters (Ya Basta-style (Italy) and Womble style (London) who use their block to push through static police lines. You can see these in action in the photo galleries.

We who are behind this festival are a bunch of squatters who were involved in the occupation of the house Smultronstället in Lund during the autumn of 2008. We’ve had lots of inspiration coming from Denmark with the struggle for Ungdomshuset, mostly from the massive non-violent action G13 where 7000 people participated in trying to squat Gröndalsvengeallé 13 in Copenhagen.

We are trying to invite the entire population of Lund to join us in taking back the city from the politicians that let houses stand empty and degrade while people don’t even have a roof over their heads, and the few owning property keep building luxury houses at expensive prices.

We demand a self governed house, after our house was taken from us by the city council. We demand that all charges against the squatters are dropped! Being homeless is not a crime!
The occupations

We gather at Stortorget in Lund at 14.00 for a grand party. We’ll be bringing coffee, DJ:s, live artists and food. Together we’ll open up a space for all kinds of initiatives. Do you fell like doing something during the festival? Get in touch with us, or just show up!

At 16.00 we line up for the demonstration. We’ll split up into four blocks with different colours; red, green, white and blue. Join the blocks and bring something in your blocks colour. The first three blocks will be occupying houses and the last block, the blue one, will be having the role of a calm block where anyone, children, elderly people, anybody will be more then welcome to participate.

If you are a part of the red, green or white, your blocks will, one at a time, be occupying empty buildings. Everybody will be able to participate, no matter age or other conditions.

The green block will be squatting tha house that we call the Gatukontoret. It’ll be the house where you can do graffitti, performe a rap-battle, and the music playing will be mostly hiphop/electro.

The red block will be squatting Piratvillan, where you can sharpen your wooden leg, make some firecrackers and watch pirated cinema.

The white block will be squatting the house we’ve named Salong Motkultur. There you can participate in poetryslams, watch a play and participate in different workshops.

The blue block will fulfill the demonstration, and if you feel like it there is always the opportunity to join in on an occupation later.

All houses will be completly free from drugs and alcohol.

The day after, the 17:th of may, we’ll once again gather at Stortorget at 14.00 for a demonstration. At that point we’ll walk over to the squats and leave two of the houses we’ve taken – exept the one we’ve chosen to keep. We’ll go over to that house after picking up our comrades, making sure we leave the two houses in a good state and and then we’ll have a moving in-party in our new house!

There we’ll be offering entertainment and food, and we’ll finish the festival by moving in to our house and making it a place to live in!
Non-violent civil disobedience

The basic attitude of the festival is that empty houses is a political problem. We think it’s insane that the police should be out on the street running errands for the sake of corrupt politicians, and that the taxpayers will have to pay for expensive police efforts defending emty houses, not being used for anything even in these times of housing shortage and financial crisis.

If the police tries try to disturb our party, we’ll be clinging on to the principal of nonviolent civil disobedience. Which means that we won’t do any physical attacks towards the police and we won’t destroy anything. Instead we’ll go around, over, and if we have to, through the police lines with as little contact with the police as possible. We’re not interrested in fighting with the cops, we want to squat houses.
Code of conduct

If the police shows up we’ll stick to the plan of non violent disobedience. Our collective strength and our mass will be enough to keep the festival going. So stick together, point out plain clothes police officers. Act together with others and make sure it’s going to be a huge fucking pain in the ass to evict us from our houses. Make sure it won’t be easy to get to us in any way.

Don’t allow yourself to be provoked by the police. Stick together, form groups with people you trust and act together. That’ll make everyone safer.

There will be a solidarity group to whom you can report arrests, as well as a legal team who can answer questions about which rights both you and the police have, and who will also take reports about police abuse and violence. This phone number will be published later and will be distributed at the street party.

Listen to the information coming from the festival crew and stick together with your block. Dance, listen to the music and have fun! Also remember to drink alot of water, eat well and make sure you get alot of sleep the night before.

Don’t talk to the police, not on the street and not if you are being interogated. The only phrase you need to remember and tell them is “No comments”. Everything else is used to gather information about you or your friends and comrades and use it against you.

And lastly the most important thing; We are going to be squatting and having fun!

Squatters of Lund and 165