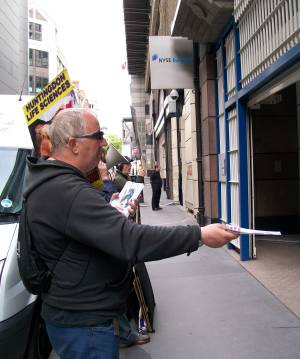 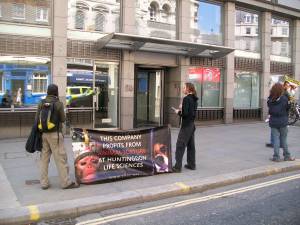 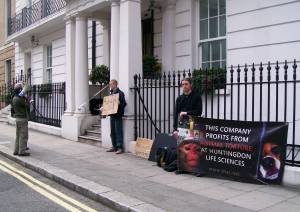 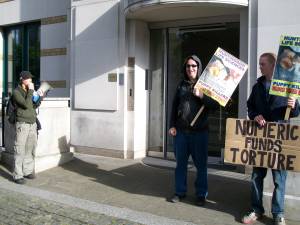 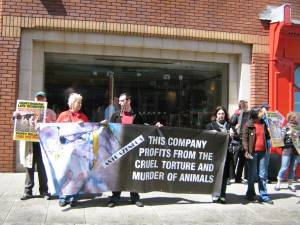 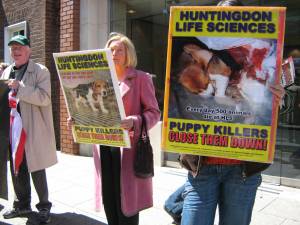 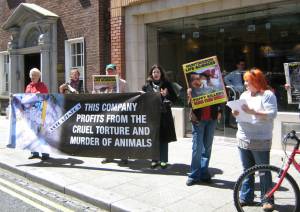 IRISH ACTIVISTS PROTEST AT ASTRAZENECA AS PART OF WEEK OF ACTION 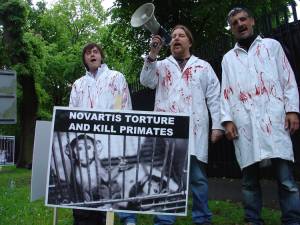 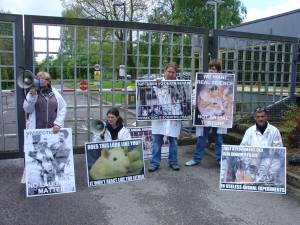 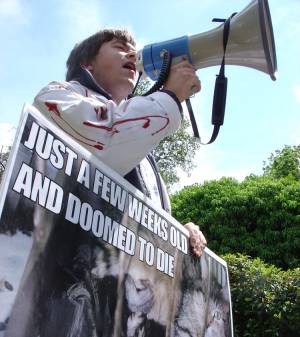 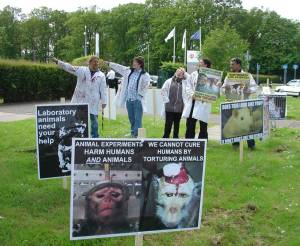 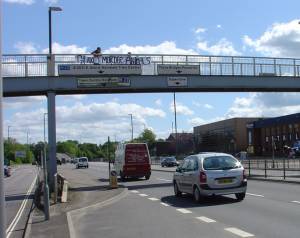 We met up at Bank at 11:30 and then moved off to our first demo of the day outside the offices of the second largest NYSE shareholder, Legg Mason at 75 King William Street. This is always a good location for giving out flyers to the many passers by. We call upon Legg Mason to use their influence as a part owner of the NYSE, to get NYSE Euronext to de list HLS (LSR).

We then went to NYSE Euronext itself on Cousin Lane to remind them of the seven exposes at HLS and that HLS (LSR) are breaking NYSE's own minimum listing standards. With HLS $72 million in debt and reporting a 25% drop in revenue for the first quarter of 2009, HLS are a financial outlook is uncertain. It time for the NYSE to lose the sinking ship and take HLS off their Arca exchange.

After a short walk along Cannon Street we arrived outside the offices of Vanguard (50 Cannon Street, London EC4N 6JJ) where a campaigner went into the offices to give Vanguard, who are the largest institutional shareholder of HLS (LSR) shares a Mad Science Award, for their shareholding is helping to keep HLS doing Mad Science and killing 500 animals a day. Vanguard became the largest shareholder recently after Barclays sold all their shares in LSR, along with 6 other companies who have all dumped their LSR shares. While a loud and well received demo took place outside their offices. Activists gave out many flyers and chanted at Vanguard, informing passers by of Vanguard's dealings with HLS, animal cruelty and scientific fraud.

After a short break we moved on to AstraZeneca at Stanhope Gate, where again a campaigner hand delivered a Mad Science Award to AstraZeneca, for which the receptionist thanked us. Probably the first award AstraZeneca has had in a while considering they are normally in the news for over charging doctors in the US for their drugs or having another lawsuit slapped on them for causing death and illness with their animal safety tested drugs. AstraZeneca were exposed earlier this year paying for experiments on primates at HLS, where the monkeys were so traumatised that they were chewing their limbs and vomiting feces. Its time to use better, more pure science AstraZeneca and stop funding animal abuse at HLS.

Next stop was TA Associates on the 2nd floor, 25 Knightsbridge, London SW1X 7RZ, who own Numeric Investors who are the fourth largest institutional shareholder of HLS (LSR). Once we started the demo some of the TA Associates office workers came to the windows. Glad you can hear us alright TA Associates, get Numeric Investors to sell their shares or you'll certainly be seeing (and hearing) more of us at this good demo location, with lots of passing traffic and passers by.

We finished on Brompton Road outside the office of Brown Advisory on the 4th Floor, 150 Brompton Road, London SW3 1HX. They have recently bought shares in LSR and are now the second largest shareholder.

IRISH ACTIVISTS PROTEST AT ASTRAZENECA AS PART OF WEEK OF ACTION

A noisy demo ensued at AstraZeneca's offices in Dublin City centre as part of Mad Science May.

It was near the busy junction of Nassau Street so we got everyone’s attention. We gave out flyers and told passers-by about SHAC, HLS and AstraZeneca.

The Company called the Gardai but we had no hassle with them and our peaceful, loud protest continued. With much support from both tourists and locals on their lunch-breaks.

We will continue to name and shame you AstraZeneca for you dangerous drugs, your over charging doctors for drugs and the animal cruelty and torture you pay for at HLS. Its time to wake up and stop dealing with HLS and paying for animal abuse.

See you soon AstraZeneca, we'll be back.

First off we visited Novartis. As usual our highly visual presence drew a lot of attention from the passing public. We were pleased that 'head' of security turned up and did his usual strutting up down in an antagonistic, but never the less amusing manner; photographing us close up (as if he hasn't all ready filled his hard drive with our photo's) He was even photographing the inside of our bags, although what he hoped to achieve by this, we're not quite sure!

Whilst we packed up to leave Novartis the nice policeman there said he would meet us at Glaxo, which was kind of him, however we were going to Fisher. There is no injunction at Fisher so we were not obliged to tell him when, or even if, we were going there. So, we had a good demo at Fisher; while the security there disrupted deliveries and preventing those trying to leave the site, whist we waited for the police to show up!

Our next port of call was GlaxoSmithKline, which has a strict injunction in place, it doesn't even allow a megaphone to be used. We were herded into a small but sunny area, watched over by a riot van and several security. Workers at the companies around Glaxo were at their windows intrigued by all the shouting. We left them in no doubt as to how Glaxo profit out of the torture and murder of innocent animals.

We have overlooked this massive animal abusing company for too long and we want them to know they will be seeing a lot more of us.... and we don't need megaphones and make our voices be heard!!

Finally, we split into two groups to do banner drops at two locations around Horsham.

At the end of our roaming 5 hour tour of animal abusers, we were hoarse and tired, but we all felt it was worthwhile and just had to be done.

State Street is now the only HLS (LSR) shareholder with offices in Italy, so we decided to go back there and remind them of the 500 animals dying in this lab for useless and cruel experiments. We went back to remind them of all the financial institutions that sold HLS shares in the past and in the previous weeks. We went back to remind them that animal rights activists want the people to know who is financing the horrors taking place behind closed doors in vivisection labs... and State Street is one of these bloody companies.

Armed with megaphones, leaflets, posters and banners 12 activists stayed for over an hour in front of the posh building where State Street offices are located. It was near to closing time, so everybody coming out of the building or nearby buildings could see us, took a leaflet and know what's wrong with State Street. The demo has been loud, with megaphones going on and chanting all the time, attracting a lot of attention and getting also positive response. Of course nobody from State Street had the courage to say anything or come and speak to us.

We will be back, of course.

For more information on the campaign in Italy: www.stophls.net

Stepping it up against the animal abusers

We set off for our first day of the may tour against those affiliated with the filthy Huntingdon Life Sciences. Today we gave them a very clear reminder of the puppy punching animal torturers they continue to support, and just how horrific and cruel it is.

PHENOMENEX - Our first visit was to Phenomenex, whom supply a vital chemical to HLS (which they'd struggle to find anywhere else) that allows them to conduct expensive useless experiments. Clearly, Phenomenex not only lacks respect for animals, but humans too, as today the staff there themselves pushed and shoved a shocked delivery worker outside in order to slam the door shut. This a desperate measure to quickly hide away from the truth, and decent compassionate people standing up for the lives of animals.

ASTRAZENECA - Next stop was Astra Zeneca, one of HLS's customers. We gave ourselves a mini-tour of their premises when we ran around on the site to various different buildings of theirs, reminding the staff who work for the company about the suffering that goes on inside the walls of HLS which Astra Zeneca continues to contribute to, however they were not the only ones to hear about the suffering as there were some other business associates around there at the same time who found out about Astra Zeneca's dodgy dealings, they appeared shocked and disappointed.
HLS are bad for business Astra Zeneca!

PHENOMENEX - We returned to pay Phenomenex another visit, after we saw their dissatisfaction with the last delivery we decided to bring them one ourselves, that of the truth, however they appeared dissatisfied once again when it was made loud and clear that we never give in and we always win.

BRISTOL-MYERS SQUIBB - Next we appeared at BMS, confronted by a security guard claiming we were on their property, but knowing it doesn't belong to them we didn't budge. Determined to let the staff know that puppies being punched in the face, primates being dissected alive and kittens having their eyes stitched shut is not acceptable. How can you support the disgusting and barbaric Huntingdon Life Sciences, BMS? Get some ethics and compassion Bristol Myers - cut your ties with HLS!

HARLAN - The final visit today was to Harlan, whom breed puppies and then send them to places like HLS where they will be burned, poisoned and mutilated. When we arrived they thought we were workers and began to open the gates! However they quickly noticed that we were not part of this pathetic and ruthless company and quickly closed them again. Why invest in all these giant fences, barbed wires, electronic security controls when the guards who are supposed to control them can't even do their jobs properly, Harlan? What Harlan does to thousands of puppies is horrific and unacceptable, just like HLS.

Phenomenex, Astra Zeneca, Britol Mysers Squibb and Harlan - You'll never see the last of SHAC unless you cut your ties with Huntingdon Life Sciences, we never give in and we always win, and we'll be right on your door step until you drop HLS!