Woman arrested at nuclear sub base talking to workers

Early this morning, one woman was arrested as Trident Ploughshares activists took their legal right to protest to the north gate of Faslane nuclear submarine base in western Scotland. Their placards showed quotations from President Obama and Prime Minister Brown reacting to the recent underground nuclear weapons tests carried out by North Korea. The activists wanted the workers at Faslane to consider how their work compared to the activity in that country.
The UK government is preparing to upgrade its submarine-based Trident nuclear missile system, which it is estimated will cost UK taxpayers at least £75 billion (or well in excess of £1000 for every person in the UK) during the worst economic crisis this country and the world have experienced since the invention of nuclear weapons at the end of the Second World War.

The British government has also threatened first use of nuclear weapons against a non-nuclear state, namely Iraq in 2002, and is committed to the NATO military alliance, which has a first strike nuclear weapons policy that it considers to be binding on all member states. Thus the British government and NATO alike disregard the 1996 advisory opinion of the International Court of Justice which could find no lawful use for nuclear weapons. Trident (or any) nuclear weapons could never be used discriminatingly in time or space, so their use would be in breach of international humanitarian law and the Geneva Conventions, and the hell that would be unleashed if they were used - or if subjected to a terrorist attack - would be barbaric beyond human experience to date.

There is, we feel, a supreme hypocrisy in condemning other countries whilst failing to acknowledge the level of terror that Britain's own nuclear weapons and the policies which dictate their deployment engender in the governments of other countries, especially smaller countries, and especially those already damaged through imperialism. Understanding, communication and, most importantly, the laying down of arms is, we believe, the only way towards the global disarmament desired by US President Barack Obama and British Prime Minister Gordon Brown. In the words of one of the activists, Janet Fenton:

"A deterrent terrifies: that is its purpose. We are utterly saddened by the development of more of these weapons [in North Korea], albeit on a much smaller scale than anything in the arsenals of the US or the UK, but not surprised. It is a response which peace activists have predicted for years."

Activist Eoin McCarthy added, "Another world is possible, and each of us has a responsibility to help make it happen."

Ms Fenton stood in the road so that workers could clearly see her message about Faslane and North Korea as they queued to enter the naval base, but the Ministry of Defence police moved her to the pavement and took away her placard. As she then attempted to communicate with workers by going over and speaking to them, she was quickly arrested. 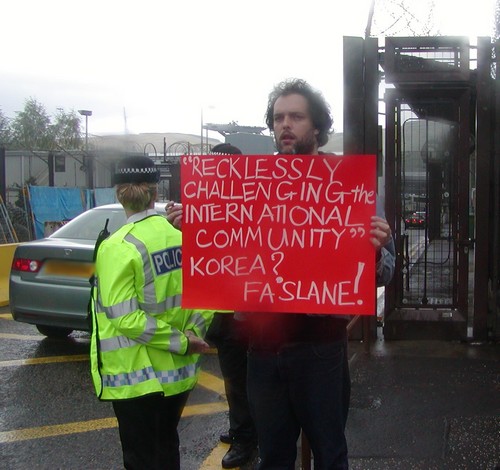 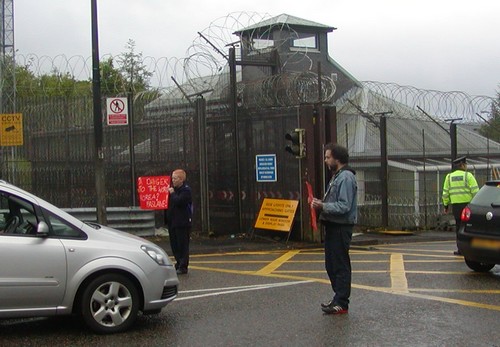 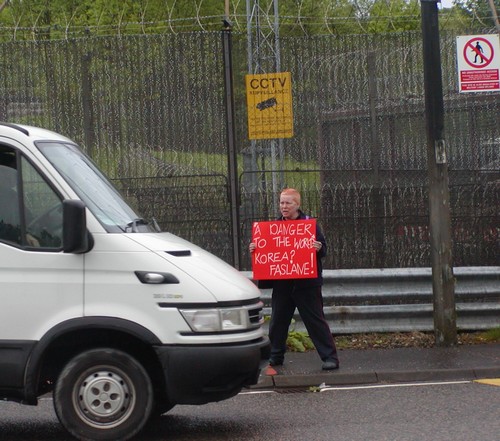 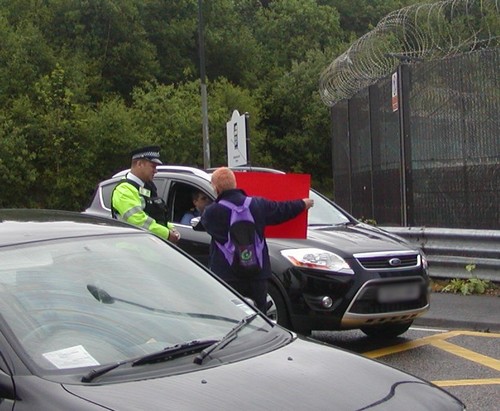 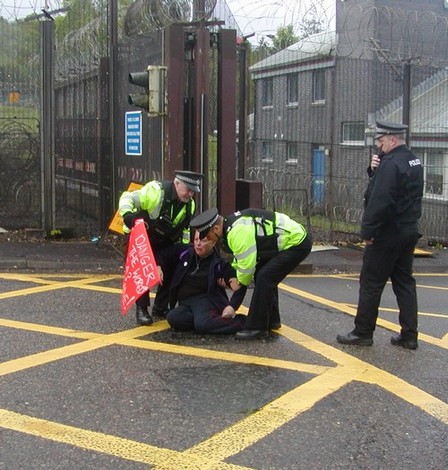 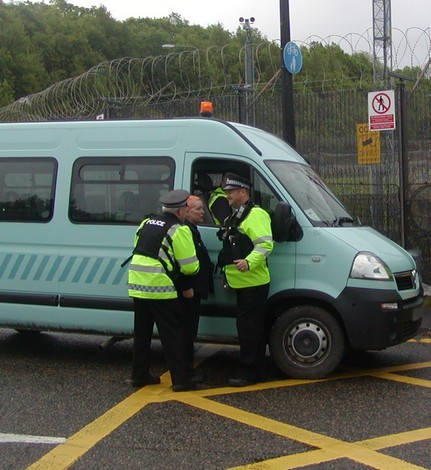