Shell causeway 'washed away' by Shell to Sea action

Part of the Shell causeway extending into the sea at Glengad was removed by Shell to Sea protesters on monday evening. This was in protest at the illegal blocking of access to the public beach and to oppose the forcing of this unsafe project on the local community and the giveaway of Ireland's natural resources. 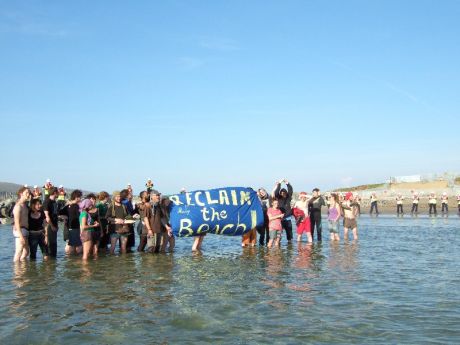 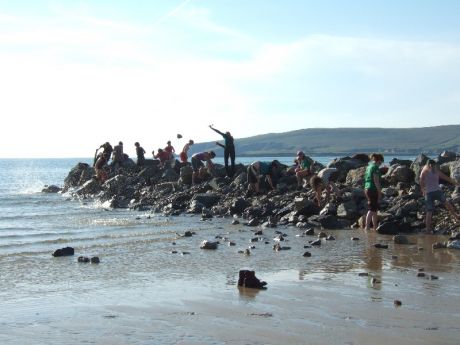 A group of about 30-40 people waded into the sea to gain access to the causeway, and proceeded to remove a large amount of the stone which makes it up. They were confronted by a 70 Shell security after about half an hour of the action, at which point the people left. An upbeat and playful mood prevailed over a beautiful evening.

The Rossport Solidarity Camp has again taken up residence in Glengad, and this last weekend held a gathering in which at least 200 people from around Ireland and further a field attended and included a mass action against shell. The resistance to shell will increase over the coming weeks and months.

Background info about the situation in Rossport in this short video...

Updates and info about Rossport...

http://wiwavshell.org - the case against shell in Nigeria. A court case is due to happen in which shell will go on trial for human rights abuses and to their complicity in the murder of anti-shell advocate Ken Saro-Wiwa.