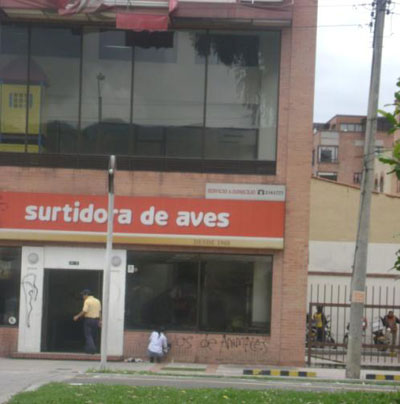 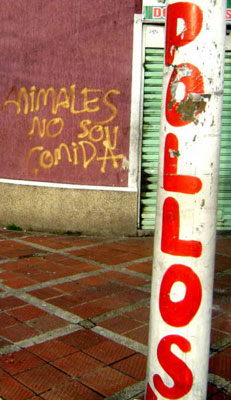 Three incendiary devices under the three cars of Bruno Heynen, Board of Directors of Novartis.

For the animals, for the earth
Animal Liberation Brigade"

"on the 25th april 2009 we attacked meat trucks of the slaughterhouse in bayreuth, south germany.

we punctured about 16 tyres of trucks and trailers and threw bottles of butyric acid into the loading space of two trucks which were left open for airing.

"ON THE EVENING OF TUESDAY, JUNE 2 WE APPROACHED THE INSTITUT PASTEUR (A LABORATORY WHERE THEY TORTURE ANIMALS IN THE NAME OF SCIENCE) AND ON A GATE ON THE SIDE OF THE BUILDING WE TOOK A NOOSE AND HUNG A LIFE-SIZED DOLL DRESSED LIKE THOSE TORTURERS (VIVISECTORS) WITH THE NAME OF MARTINA CRISPO (HEAD OF THE TRANSGENIC AND EXPERIMENTAL ANIMALS UNIT), THEN WE SET FIRE TO TWO TIRES AND LEFT A MESSAGE ON THE WALL FOR THIS TORTURER, THAT READ:
'MARTINA CRISPO:
FUCKING KILLER
IF YOU CONTINUE TORTURING ANIMALS
THE SAME FATE AWAITS YOU
WE KNOW WHERE YOU LIVE'
WE THEN THREW LEAFLETS EXPLAINING OUR VIEWS ON VIVISECTION AND THE REASONS WHY WE OPPOSE IT.

BETWEEN THE 2ND AND 5TH OF JUNE THE IMM WILL TAKE PLACE, THE THIRD MEETING OF REGIONAL SCIENTISTS. THIS IS A CALL TO ALL THOSE WHO OPPOSE THE EXPLOITATION OF ANY ANIMAL AND ARE READY TO USE DIRECT ACTION TO END IT ALL.

AS THEY KNOW, WHILE ANY ANIMAL IS IN A CAGE, WE WILL BE THE ONES WHO WILL GO OUT MASKED, UNDER THE COVER OF NIGHT, TO PUT AN END TO THIS SYSTEM BASED IN EXPLOITATION.

"In complete opposition to any form of repression and domination, autonomous cells of the FLA and FLT in 'colombia' have become more active; each time they take action, they become more visible. They are anarchists and declare themselves in graffiti as anti-authoritarians, outcasts of every nation and all forms of power.
In the last 2 months they have taken actions involving economic sabotage and the destruction of the property of those made rich at the cost of innocent lives. Starting with graffiti, 'Animal Murderers!', 'We will not stop until all of us animals are free!', 'ALF is not dead' and then attacks on shop windows, breaking glass and littering their storefronts; they have attacked key businesses and the establishments of those who sell the dead bodies of those who should have free and wild lives, respected and without masters. KFC franchises, a poultry supplier, a Compañía del Sabor [fast food restaurant] and others who sell the fruits of prisons will no longer be safe. They have already had to close for a few hours to clean up what had been done to them.
The FLA needs stronger representation such as press offices for dissemination and support, as well as more anonymous, clandestine and decentralized actions by those who no longer shed tears for injustice but instead spill gasoline and break the windows of businesses that belong to the powerful, the killers and the dominators...

For a nocturnal campaign against the poultry industry in Bogota, for actions with ever greater economic repercussions against the exploiters of the earth.

"Now the fraudulent political parties inundate the streets with their propaganda and their phony speeches adorned with flowers, beautiful colors and happy faces, covering the horrors that the animals and the earth are subjected to by them so that they can prolong their democratic-fascist-speciesist dictatorship. Authorities from various municipalities in Mexico State are now aware of many different incidents, for example the arsons on behalf of the earth, which they think are just another trick by a group of paid thugs who arm their political opponents in order to discredit the public safety that is always promised, but no, we will make it public again today, the Frente de Liberación de la Tierra is not moved by political parties, nor groups of paid thugs; the only thing that moves us to engage in direct action is rage against their hypocritical green speech, and the environmental destruction that must be stopped by our own hands. Today the political parties expand highways, pave places where beautiful flowers were starting to grow and destroy the only trees, catalizers of carbon dioxide, that we had left in the city. We will no longer permit this. So once again we took to the streets of Mexico State and placed an incendiary device in one of the machines that destroys the earth and that was being used to cover the still-living earth with pavement. Apparently the fire was extinguished because it only damaged part of the driver's seat, the windows and some cables.
Warning: In our next action we will leave your machines unusable as we have done before.
FLT/ELF"