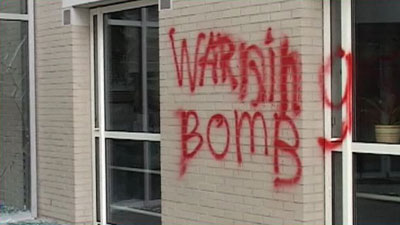 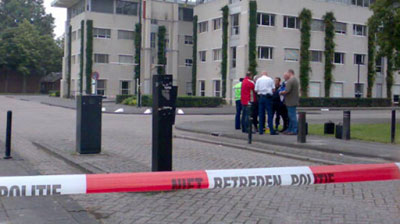 "In the morning of June the 15th the ALF went back to the
Wageningen university. For more than a year this university
has been warned about their meaningless experiments on
various animals and especially pigs (obesity research).

But the Wageningen university decided to do NOTHING
and even sent the police after us! We are trying to help you!

So we painted the messages:
Danger Bomb, Warning Bomb and Stay Away.
We also busted a window through which we supposedly gained
entrance to plant a bomb. But we didn't and took off.

At 7.00 am this message was discovered and the police was called.
They also called the Royal Army bomb squad.
The building was evacuated and sealed up.

Media first reported that a strange package was
found but later said nothing was found at all.
But before they noticed it was just a hoax it was around three
in the afternoon. This was very unfortunate because
the university has an international congress on Food
coming up tomorrow.

See how Annoying a bomb threat is? Now we ask of you:
Make some REAL changes for the animals before the end
of the month. Real changes not meaningless debates or commissions.
Not because we scared you into it, But because it's
THE RIGHT THING!.

We have better things to do than running around at night.

"ROME ITALY We cut wires and the oil tube of a digger used to deforest. unfortunately there were men at work so we could not destroy the cab Earth liberation front"

"On the night of June 8, we, the Frente de Liberación de la Tierra, along with some anarcho-Insurrectional individuals who are committed to constant conflict with the state and its institutions, decided to carry out an action together in the city of Ecatepec in Mexico State. This time our main objective was the machines that belong to authorities in that city that are used to rip up trees from their roots and to cover the earth with concrete; the machines were hidden under the bridge over Avenida Morelos and López Portillo.

When we arrived there we realized that the earth-destroying owners' slaves were inside the machines, and that they surely wouldn't be leaving until the following day, to work and to be exploited to earn a few coins for their subsistence. Why is it that people are watching the machines? Is it that the owners fear leaving them alone and the next morning finding them unusable, that their urbanist project be delayed and thousands of pesos lost in damages, like they have seen happen in other municipalities in Mexico State?

This objective was abandoned and we decided to carry out another; in front of the excavators, bulldozers and other machines was a large command headquarters of state police torturers, the ASE (Agency of State Security), violators of the prisoners in Atenco, accomplices in the killing of animals in Jaltenco, protectors of the interests of the multinationals, killers of the earth, living with the impunity that Mexican justice gives them, laughing with their machine guns on their backs and confidant that they can destroy any protest with their repression. They were there; maybe they didn't know that all violence creates counter violence and for all who are struck down, sooner or later there will be a response.

Dedicated like wild wolves who have left their dens under the full moon, we placed an incendiary device in one of the trucks, a small flame ignited the engine and burnt the truck.

Our sabotage was fast and effective, the destruction of social peace was imminent. What police would be expecting an arson attack in front of their very noses? How do those commanders feel who boast of the fast effectiveness of their subordinates now that a group of eco-anarchists have attacked their facilities? Do they feel horrible because the raid they carried out after the fire was useless; they could not catch those responsible who now write these lines of revenge against the anthropocentric state and its institutions?

The war against this system is deadly serious, if they order their police to suppress, incendiary self-defense will rise up.

We dedicate this action to the fierce defense that is carried out in the Amazon in Peru; the peasants killed by the anthropocentrist state have been avenged by their natural instinct to defend the wilderness, killing, kidnapping and also injuring the police.

Let's defend the planet where we live!

"In the first week of June the Luddites Against Domestication of Wild Nature divided into different parts of Mexico State and Mexico City and we sabotaged around 78 telephones belonging to the biocidal Telmex company, in addition we flattened the tires of one of their vans.