Activist dying in jail for having evidenced pedophiles' networks in Belgium

Some high ranking officials in Belgium and in France protect pedophiles and persecute the activists who try to reveal the extent of the corruption. Since 1995 more than 20 people were murdered (victim-witnesses, investigators, activists, attorneys...). Many others were threatened. 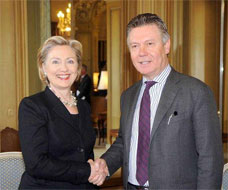 
Pedophiles who belong to organized networks in Europe can abduct, rape, torture, prostitute and kill children without due prosecution : this is because some of the public officials are themselves customers of the trade.
But when some citizens become indignant about the horrors, they are the ones to be arrested. If they insist too much on justice and protection of children, then they have to leave their country (Jean-Claude Krief), or are likely to be killed in an "accident" (Gina Pardaens) or die of "natural" death in jail. This is the present situation of Marcel Vervloesem of the Werkgroep Morkhoven who brought to Belgian, French and European justice 21 CDs showing evidence of what organized perverts have been doing to children for a long time : strangely, those authorities did not press charges on the identified criminals while Mr Vervloesem was the one to be sent to jail on fabricated accusations of being a youth rapist, which given his medical conditions he is unable to be.

Now, deprived in jail of vital medical treatments, he is slowly dying while the whole of Belgium and of Europe prefer to look the other way.

Similar fate for Patricia Poupard in Bordeaux, France, who tried in vain to protect her son, raped since age 3 by his father : she was the one to be sent to jail then to forced psychiatric "treatment" to try break her resistance. Now as a consequence she is permanently disabled, while her son remains in the custody of his father, who thus could even prostitute him.

Strangely, the honest citizens and all governmental, non-governmental, European, and international organizations do nothing, as if the facts were not true or as if the problem was too big ? Therefore, the massacre of children and of those who try to protect them continue.
Even when such an event as the disappearence of the little British girl Maddie in Portugal was widely mediatized world-wide, no real action followed though the scheme is always the same : prosecute the victims and those who take their side in order to protect the criminals.

How could Europe fall so low ? Warning to foreign visitors : a number of countries in Continental Europe are unsafe for children, if your child disappears you'll be likely the one to be accused.

Do not hesitate to send Marcel Vervloesem a postcard, as it will releif him to know that his life was not shortened in vain:
Gevangenis (Prison) Brugge
Sectie 35 - K 62
t.a.v. Marcel Vervloesem
Legeweg 200
8200 Sint-Andries - Brugge (Belgium)

The Belgian minister of External Affairs Karel De Gucht, met the American State- Secretary Hillary Clinton in March 2009. Belgium is seated along with the US in the VN-Human Rights Council after De Gucht said he was prepared, along with other European countries, to ‘take on’ Guantanamo-prisoners.