21st June 2009 -- today an ad hoc group of Israeli boycott activists from many different campaigning groups, including Jewish groups, held the third Tesco supermarket action. They entered two branches in the Shoreditch area of London to protest against the stores' stocking of fruit and vegetable produce from illegal Israeli settlements in the West Bank. 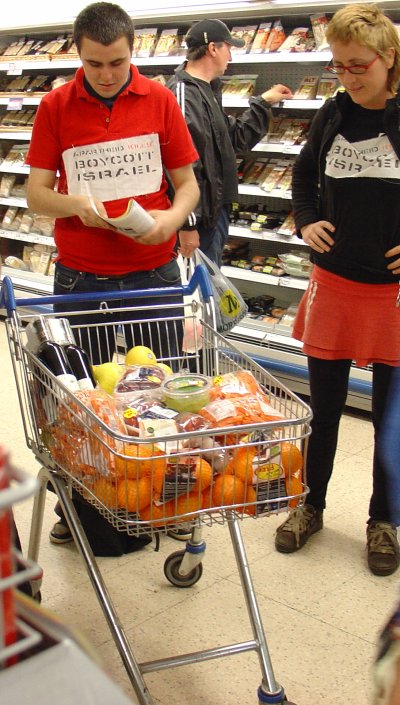 After entering the first store, the protesters sat down in front of a trolley which had been filled up with Israeli produce. They chanted slogans and sang songs led by the Political Diva. Shoppers were handed leaflets and told why the action was being taken.

Very soon the manager and security staff appeared on the scene. The asked the protesters to stop, and threatened to call the police. Since the action was intended to be peaceful and non-arrestable the protesters left the store, still chanting.

A little later they entered another store not far away. Again they sat down and began to chant and sing. Again the manager and security approached and asked the protesters to leave. He did not threaten to call the police immediately, but did seem quite distressed by what was happening, so the protesters moved outside and carried on singing. Passers-by were taking a great deal of interest, and many took leaflets.

Like the earlier actions, it was perfectly peaceful, and the police were not involved.

The purpose of these actions is to let the supermarkets know that stocking goods from illegal Israeli settlements is unacceptable. So far Tesco has been the target, but there are other supermarkets, especially Waitrose and Morrisons, which not only stock such produce, but have been unwilling to meet with campaigners to discuss the issue.

Therefore, the protesters say, branches of these supermarkets can expect to be targeted by actions like today's.

See this report on the BIG Campaign website for more pictures.