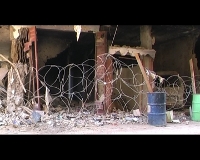 Still of "Two Years Under Siege"

Two years after the outbreak of the war in Nahr al-Bared, the camp's fate remains unclear. The reconstruction of the official camp might start soon, but the army keeps its tight grip on the camp. Several checkpoints, barbed wire and military posts cut Nahr al-Bared off from its surroundings.

Nahr al-Bared Camp used to be a thriving marketplace in the northern Lebanese region of Akkar and about half its costumers were Lebanese. During the war, the Lebanese army has not only defeated the militant group Fatah al-Islam, but also completely destroyed the refugee camp. Its businesses were looted, smashed and burnt, even after the war had ended. The camp's once flourishing economy was physically eliminated.

Two years later, about half the camp's population has returned to its adjacent area. Hundreds of businesses have re-opened, but economic recovery is seriously hampered by the tight siege imposed by the Lebanese army. Thus, suspicions have risen that the war's actual target wasn't Fatah al-Islam, but Nahr al-Bared's economic life.

In this 10-minute film, the co-owner of an ice cream factory, the president of the local Trader's Committee and the Imam of the al-Quds Mosque speak out on the siege and its economic consequences.

The film can be watched and/or downloaded here:

Our other films and reports from Nahr al-Bared are available here: