Stories from people trying to cross the border at Calais

Behind all the scare stories and fiction of the tabloid scum press, we are making friends with people here who gradually tell us their stories. Obviously they are scared of what would happen if their stories were made public but have agreed to let us tell people the rough outlines. All names have been changed. 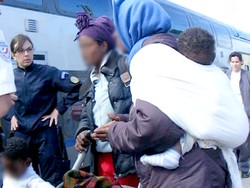 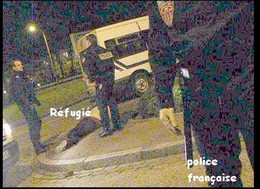 Avdar, (Kurdish) has been separated from his family for several years. He is only 22 years old and his father, brothers and sisters are living in UK. He desperately wants to join them.

Samal, (Iraqi Kurd) was working as a policeman in Iraq. He fled the country at very short notice after his best friend was shot in the street and his brother was shot on his doorstep. Before he left he posted his ID and evidence of his situation to a friend in the UK. He has been in Calais for over three months attempting to cross. He fears for his life if returned.

Nijdar, (Afghani) was working for the occupation forces as a cook in Afghanistan. He fled to the UK but has been in Calais for 6 weeks.

Nasraw (Iraqi Kurd) crossed to UK eight years ago and his asylum application was refused in 2005. He was told that he would be deported at some point or could travel back to his country with the IOM. After several years of living in limbo on his friend's floor he left UK to see if he could find better life somewhere else. He is now stuck trying to get back in to UK where he has friends.

Amin (Iran) showed me how his toe nails were pulled out by police for his political views. He thinks that President Ahmadinejad is a fascist and he was brave enough to say it. He thinks that the UK is a good place where he will be safe. He has been in Calais for two months.

These courageous and warm men are stranded here in limbo like hundreds of others. Our current Immigration policy and the Dublin Convention, (that says you must claim asylum in first country you can) makes it impossible for them to claim asylum in the UK. As this statement from Donna Covey, Chief Executive of Refugee Council shows, there is no way that people can legally seek asylum;

“The number of applications for asylum in the UK and EU are falling, yet the number of refugees globally has increased. It is imperative that the EU remains a place of safety for people fleeing persecution, and that richer European countries don’t leave the poorest countries of the world to shoulder this responsibility. Yet there is still no legal route to claim asylum in any EU country.
“Only this week, a group of people were found close to death in the back of a chemical tanker they had hidden in to flee their homelands. It is shameful that incredibly vulnerable people, including children and victims of torture, are forced into such desperate measures – but this is what happens when borders are sealed so tight. Borders must have doors for refugees who need our help.”, 13 February 2008, Refugee Council

Providing sanctuary in Britain is more important than ever. If we just take the top few countries of origin of asylum claimants: Zimbabwe, Eritrea, Afghanistan, Iran, Iraq – they are all countries where violence and human rights abuses are rife and well-documented. Donna Covey, again from the Refugee Council,
“Contrary to what people think, Britain does not receive the most asylum applications in Europe. France and Italy both took higher numbers last year. Offering safety from war and persecution is utterly crucial in these troubled times. We need to make sure we continue to do our bit, for it really is a matter of life and death.” May 2009


No one is Illegal