Refugees in Calais. Why we say NO BORDERS!

A few years ago that nice Mr Sarkozy (then French home secretary) was desperate to impress that even nicer Mr Blair. So to capitulate to Mr Blair and his masters in the British tabloid media, he closed the Red Cross Sangatte refugee camp near Calais. Prior to its demolition Sangatte was a place where vulnerable refugees fleeing places like Iraq, Somalia and Afghanistan could get food, healthcare and a bed for the night. By a staggering coincidence Great Britain has had rather a lot of influence in the fortunes of Iraq, Somalia and Afghanistan. So some people might suggest that we have a slight responsibility with regard to helping these people? Now (post Sangatte) they have to sleep under bridges and in dangerous camps where they are regularly attacked by the Police and local racists. Fortunately they are being fed each day by a number of unpaid volunteers from the Calais based 'Salam' charity who are doing an amazing job. 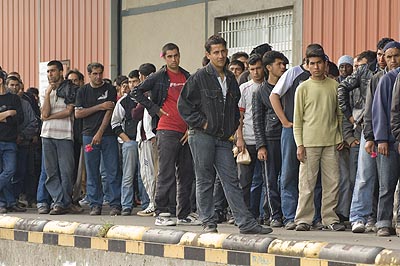 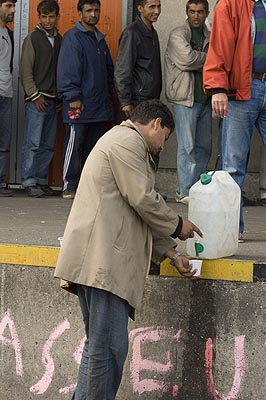 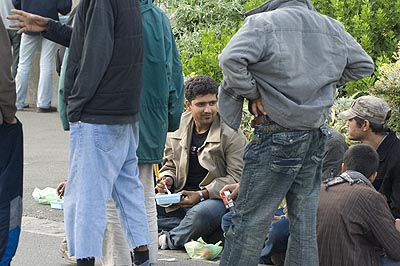 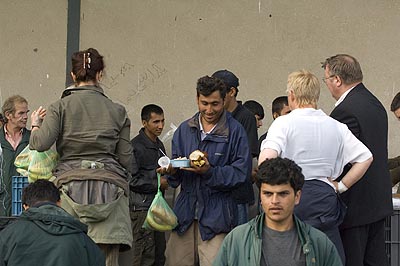 Only possible due to the hard work of the Salam charity. 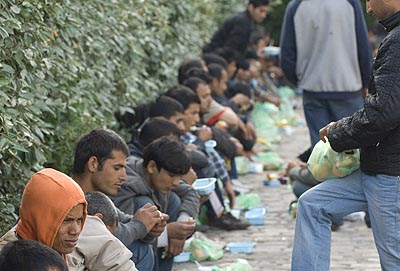 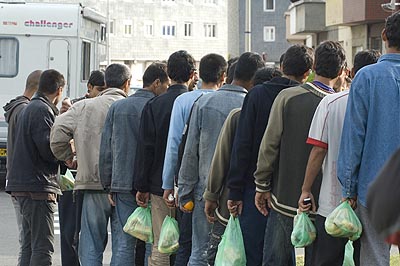 Or could it be that the corporate media are lying bastards? I wonder...

Since my last visit here in 2007 very little has changed. Then the majority of destitute refugees were Iraqis. Now they are Afghans. Then the people collecting their evening meal parcels numbered about 450. Now they are at least 700. But the ritual remains the same.

They sleep rough. They get attacked by cops and racists. They try to board lorries heading for Britain and most of the time they get caught.

We spent an hour talking to some new arrivals from Afghanistan.

Sayeed was forced to leave his friends and family when a local militia handed him a death sentence because his brother (whom had offended them) had already left the country. He misses his family and speaks to them whenever he can beg enough money to buy credit for another person's mobile. If he returns his family will be put in extreme danger so his exile is permanent for the time being. He blames the instability and lawlessness of Afghanistan for his predicament:

“They have had eight years to make a country worth living for the Afghan people and still it gets worse every day.”

His best friend Omid has joined him on this journey. His motive for being here is less urgent. He wishes to join members of his family in Birmingham and get an education. He also complains about the situation in Afghanistan pointing out that despite his language skills (which are very impressive) he has been out of work for over a year. Unemployment is one of the main reasons that Afghans are fleeing in their droves to try and make a living for themselves and their families.

Sayeed and Omid have arrived after a six month perilous journey that has taken them through Iran, Turkey, Italy and Greece. They are far from happy to discover that many of the Afghans that they have met in Calais have been in this dump for over a year.

They both have a very rose-tinted view of Britain as a country where work is easy to find and human rights are respected more than anywhere else!?!

I suppose work is easy to find if you are a disgraced former banker moving from a eight figure salary to a seven figure pension pot...

And human rights are respected more than Afghanistan unless you are a Brazilian getting an underground train from Stockwell. Or an Evening Standard seller walking home from work during the G20...

I wish Sayeed and Omid all the luck in the world. They are going to need it.