Since March 9, former sugar workers suffering from Chronic Renal Insufficiency have been camped in Managua calling for compensation. 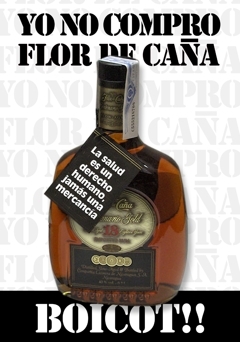 They belong to the Nicaraguan Association of Those Affected by Chronic Renal Insufficiency (ANAIRC) which is affiliated with the International Union of Food Workers
(UITA).

They are demanding compensation from Nicaragua Sugar Estates, Ltd., which owns the San
Antonio Sugar Mill and is part of the Pellas Group, Nicaragua’s wealthiest corporation, for damage to their health caused by indiscriminate use of agro-chemicals and water contamination. For more than three months they have tried to sit down to have a discussion with the company without receiving a response or even a signal that demonstrated the intention to look for a solution to this drama which is the daily reality for thousands of former sugar workers and their families. On the contrary, all they have received have been pressure and threats. Their tenacity, proud and firm, has earned them the help and solidarity of international organizations and people who have followed what is happening in Nicaragua.

To highlight the struggle and to learn her perspectives on the future, I conversed with Carmen Rios, president of ANAIRC.

Q – It has been three months since you arrived in Managua. How do you evaluate that period and what advances have there been in the struggle?
Rios – It has been a very hard struggle with many difficulties. With the company we haven’t progressed much, but, I believe that, yes, there was a great advance in terms of presenting our demands at a national and international level and to pressure the Pellas Group so that it listens to us.
We have received support from some national organizations, from university students, and from a group that is promoting a boycott of Flor de Caña rum. At the international level solidarity support has been bountiful and I want to thank especially UITA and the Italy-Nicaragua Association for the support they are offering us.

Another very important aspect is the experience that a good part of our people are gaining in these days. For many of our affiliates and widows, it is the first time they’ve participated in an activity of protest of this type, leaving their homes to come to live in the camp, defending and demanding respect for their rights. Lamentably we must also indicate the lack of coverage that the national media has given our
protest, as opposed to international press coverage which we evaluate as very successful so that our fight is known anywhere in the world.

Finally, I think also that little by little the Nicaraguan people are beginning to develop a consciousness of what we are doing here, of what our demands are. We never tire of speaking and explaining to people who we are and what it is that we want: justice and a right to compensation for what they did to us.
So independent of the fact that the company has not yet given us an answer, we are sure that we are going to win.

Q – What changes have there been in the camp?
Rios - We arrived with few things. Hammocks, personal belongings, and something to cook in and to survive. Thanks to the aid that has been offered at the national and international level, we could hold on with dignity these two months and we are ready for more. Now that we are entering the rainy season the camping has become more difficult. We have raised black plastic tarps thanks to the support of the UITA and are going to be able to hold on with the arrival of the rains. We are not going away.

Q – How is the morale of the people? Are there problems with sickness?
Rios – New people keep coming and we have tried to rotate so as not to worsen anyone’s health.
Those who were most ill went home and consulted the health center. They rested and got well and later returned. Seventeen people were directed to return to Chichigalpa because of their health. Lamentably we also had a death. Yesterday we buried to Pedro Tercero, a former suger worker who was here with us but had to return home because he was very ill. He sent us his son to follow in the struggle, and he requested
that when he died we hold his wake in front of the Pellas Building, but that was not possible.
The people are here because they are conscious of the struggle that we are taking forward and that we are going to win. It has been hard, but the compañeros say we cannot leave, we must go forward. Our people have sensitized themselves in the course of these two months, and they see that it was necessary to come to Managua to undertake this fight.

Q – Also there were difficult moments, pressures and threats. What is the situation now?
Rios – There were difficult days. We were afraid for our lives and there were rumors that workers of the company were going to come to attack us with the excuse that our objective was the closing of the sugar mill and the liquor plant, which is totally false. We have always said that this has never been, nor is going to be, our objective because we know that these companies provide many jobs. At the moment it seems that the situation has calmed a little. We went to Chichigalpa and talked with people so that they no longer believe all these lies and they understand our fight. We are like an anthill. We have come along doing our work little by little and now it is time for the harvest.

Q – What do you want to say to the sugar companies?
Rios – We are people of dialogue; we want an opportunity to dialogue. We have said that over and over in so many letters to Mr. Carlos Pellas that haven’t been answered. We want him to remember that his former workers are dying. To date 3,326 people have passed away, and this means thousands of people who have been abandoned. The only thing we ask is to begin a dialogue.