Seventy people demonstrated outside Communications House in London on Saturday afternoon (27 June 2009) in a protest organised by Fight Racism! Fight Imperialism! in support of the SOAS workers who were detained there, the protesters at Yarls Wood and all migrants in struggle against Britain's racist immigration laws.
Pictures Copyright (C) 2009, Peter Marshall, all rights reserved. 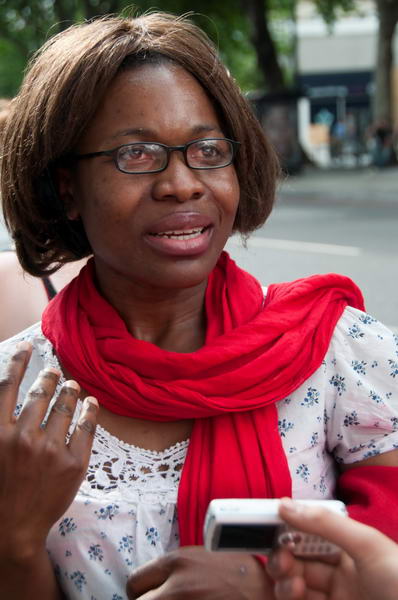 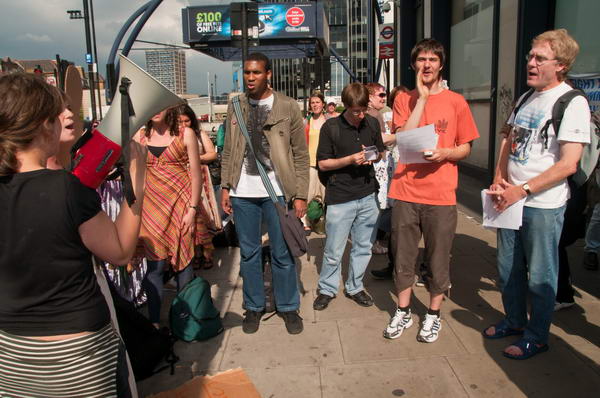 Outside Communications House in Old St 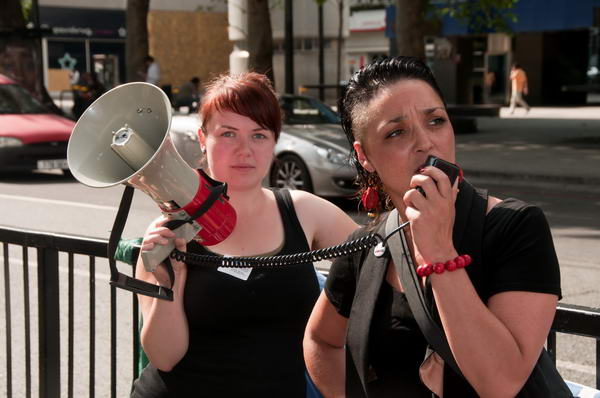 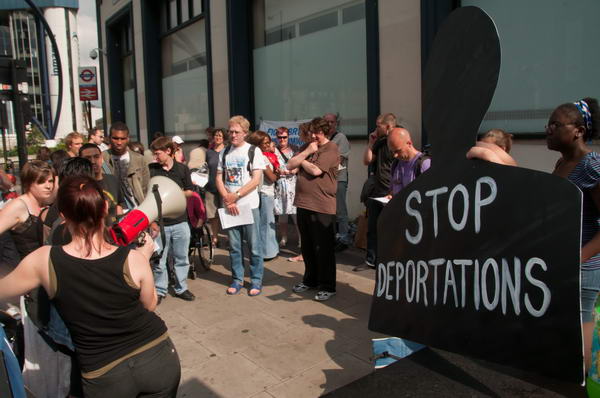 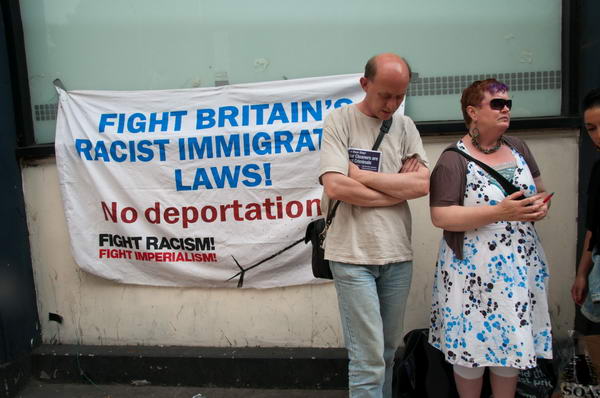 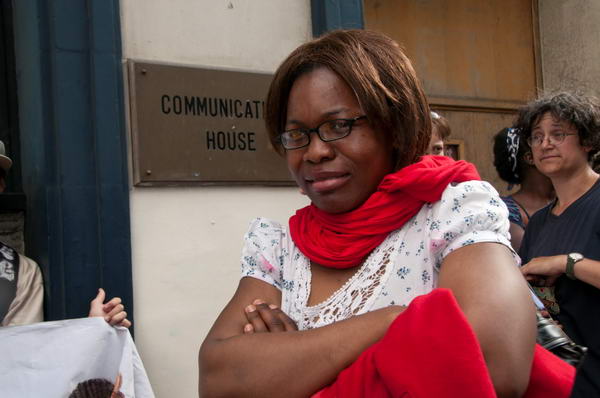 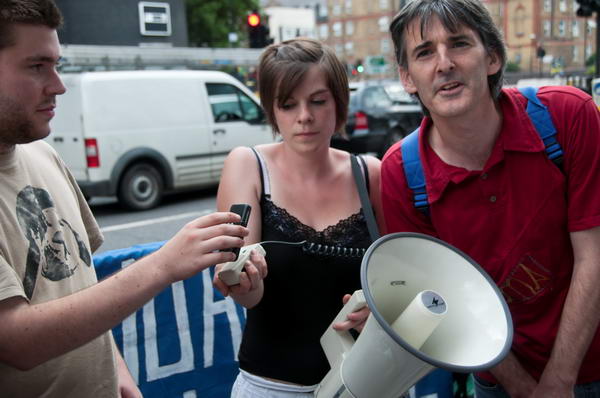 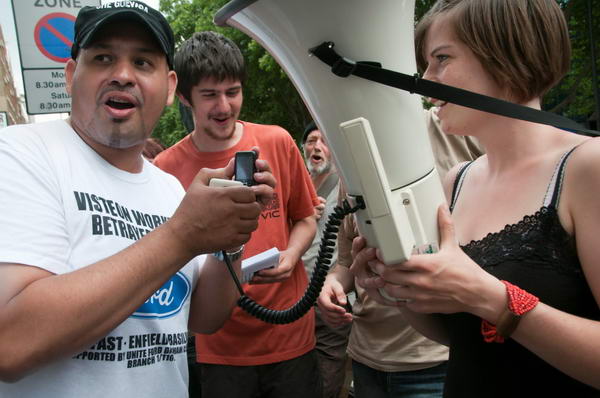 Another Call from Yarl's Wood

Communications House Immigration Reporting Centre on Old Street, just a few yards west of the station is a gateway though which many refugees and asylum seekers are processed before being taken to detention centres and deportation. It was where the SOAS 9, cleaning workers at a London college, were taken after an early morning raid carried out with the collusion of the college management;

http://www.indymedia.org.uk/en/2009/06/432417.html
in what is widely thought to be a management reprisal against the cleaner's successful campaign for a living wage and trade union recognition. Campaigners from SOAS were among those there today. More about their campaign at

http://freesoascleaners.blogspot.com/
and there is a further London demonstration, 'Our Cleaners are Not Criminals', outside the Home Office in Marsham St, from 5.30-6.30pm.

The role of Communications House in Britain's racist and inhumane immigration policy has been repeatedly exposed by Fight Racism! Fight Imperialism! in a long series of monthly lunchtime pickets - the first Tuesday of each month from 1-2 pm - the next is on Tuesday 7 July.

Saturday's protest began with an address by Laureine Tcuapo, a Cameroonian who came to Britain to escape repeated rape and abuse from a relative in the police force there. On Friday 12 June at 7am, immigration police kicked the door of her house in Newcastle down and took her forcibly to Yarl's Wood along with her two young children, intending to fly them back to Cameroon on Monday 15 June. After campaigning on her behalf by Tyneside Community Action for Refugees and No Borders North East on her behalf she was released on 25 June but she is still at risk of deportation.

She was able to tell us at first hand of the terrible treatment given to those detained in Yarl's Wood, which she also described in a TCAR press release:

"Children were given out of date crisps and food. Families were separated; people were being beaten up by guards. It just felt to all the asylum seekers that we were less than animals.

Even though I am outside, I still think about my time in Yarlswood. It was very traumatising. I can’t even imagine how things are at the moment for people inside. They’re counting on us because inside, they have no rights."

Laureine was in Yarl's Wood when the current hunger strike by detainees began last Monday, when they decided to refuse to go to dinner in a continuing protest over their inhumane conditions. The prison is run by SERCO.

On Wednesday detained families staged a sit-in in the corridors. Around 4pm, around 40 guards came in and brutally set upon them them, removing all the men. Clothes were ripped of some of the women and several men were injured and a guard stamped on a young child, Princess Omoru. Her mother and father were assaulted - and her father denied medical treatment for his injuries and her brother's hand was trapped in a door as an officer slammed it shut. The authorities appear to be trying to deport the family as soon as possible - perhaps to remove the evidence of these assaults. There is an on-line petition you can sign a petition to keep this family in this country:

At least six people - including Steve Omoru - were removed, and doctors were refused access to the injured; a press statement from the UK Border Agency denied there had been any injuries. An Indymedia feature gives more details

At the demonstration we were able to hear from detainees inside Yarl's Wood speaking over their mobile phones and they expressed their thanks for the solidarity being shown in the demonstration.

http://londonmigrantworkers.wordpress.com/2009/06/24/solidarity-urgently-needed-for-yarls-wood-hunger-strikers/ - summarises the position and gives the main demands of the hunger strikers, as well as giving suggestions for simple actions that individuals can take. Much of what is still happening at places such as Yarl's Wood has been condemned by various inspections and is clearly against the laws of this country as well as EU Human Rights leglislation and attention needs to be drawn to it.

As well as attending demos and making phone calls to SERCO and Yarl's Wood, contacting the local MP for Yarls Wood and making sure that the BBC and other news organisations are aware of what is happening, there is also a need for money to keep fighting the camapaign - in particular for allowing detainees to keep in touch by mobile phone and also for travel expenses for people such as Laurein to address demonstrations. You can donate trhough most of the organisations linked above.