Corporate Watch: The Art of Funding 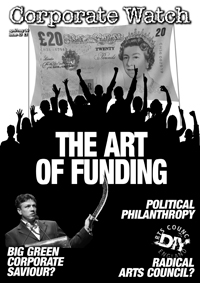 As an organisation that is partly dependent on outside funding, Corporate Watch often faces the dilemma of balancing its financial survival with a critique of funding bodies and grassroots activism funded by them. While maintaining a critical view of corporate and non-corporate funders, we also recognise their role in political organising and social movements and the difficulties of being totally independent. Thus, while trying our best to avoid dodgy money and money with strings attached, some difficult questions seem unavoidable: Is there good funding and bad funding? Can activists avoid compromising their politics as they go down the funding route? Can they justify being paid for what others do for free? And in the bigger scheme of things, are foundations and funding trustspart of a ‘big conspiracy’ to prevent, or channel, social change?

We try to tackle some of these thorny questions in this issue. Michael Barker and Joan Roelofs write about political philanthropy, focusing respectively on corporate and non-corporate funders. Barker argues that one of the primary purposes of Corporate Social Responsibility, dearly embraced by liberal not-for-profit organisations, is to “constrain the advent of social revolutions.” Roelofs similarly argues that the not-for-profit sector not only helps sustain capitalism and imperialism but also fends off, often in creative and benevolent ways, any threats to the power of elites.

As a case study, we have included an article on the Arts Council and its role in “refining dissent.” Providing a historical background about the Council’s politics, we talk to a number of grassroots artists who have been funded by the Council and ask them what they think of it. Two other interesting examples are also included: the Big Green Gathering’s acceptance of a loan from a joint venture with a right-wing sports and entertainment multinational, and French multinational Veolia’s funding of green fairs. As a counter example, perhaps, we have included a long article about the recent, unprecedented crackdown on the animal rights movement, arguably one of the most effective anti-corporate movements in recent times.

Wary of the trap of mass, simplistic generalisations, we argue that funding foundations, or at least some, are the velvet glove of state repression against social justice movements. Through thinly disguised programmes and schemes, they utilise activists’ need for money to channel their energy into projects that pose no serious threat to the status quo. In other words, in order to avoid real social change, they provide some outlets for discontent that can be kept under control.

One could argue that, to some degree, all funded activism, as opposed to DIY activism, is ultimately politically problematic. Many would argue, however, that it is possible to use some funds for socially progressive ends without becoming overly reliant on funding; that it is still possible to source funds that are more ethical than others and maintain a DIY ethos. The crucial thing is whose agenda do these funds and those projects serve. It is an important debate to be had among grassroots activists and campaigners. We hope we are opening it, once again, in a critical and constructive way.