Governor Of Queensland Unsympathetic Toward Child Victim Of Judicial Abuse

This article is about inaction on judicial corruption allegations and the dogged silence with which these claims have been met by the government. 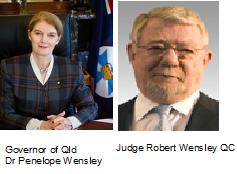 Robert Wensley QC was the presiding judge in a complaint about severe school bullying and education discrimination which was never remedied.

The complaint was lodged by Brisbane woman Jennifer Nash on behalf of her 12 year old son who was repeatedly denied legal youth advocacy like other children.

The other Judges mentioned in the documented and corroborated judicial abuse and corruption complaint by Ms Nash are former Tribunal President, Judge Jean Dalton QC, Queensland Supreme Court Judge, Ann Lyons and Judge Roslyn Atkinson, who is also the Queensland President of the International Committee of Jurists.

The allegations by Ms Nash and her son that the Judges were intimidating and biased, and that their courtroom audiotapes and transcripts were repeatedly edited in order to pervert the course of justice, have never been disputed by the government.

"Equal treatment before the law is a pillar of democratic societies. When courts are corrupted by greed or political expediency, the scales of justice are tipped, and ordinary people suffer. Judicial corruption means the voice of the innocent goes unheard, while the guilty act with impunity" Huguette Labelle, Chair of Transparency International.

Dr Wensley is currently in England after meeting the Queen at Buckingham Palace in the latest stop on a controversial $50,000 overseas jaunt. Staff at Government House told media they were angry at the timing of the official trip with a personal family event.

Due to lack of press freedom this story has never been reported in Australia.