Anarchists from Greece marched in solidarity with repressed immigrants and clashed with cops and fascists while setting streets and ATMs on fire. 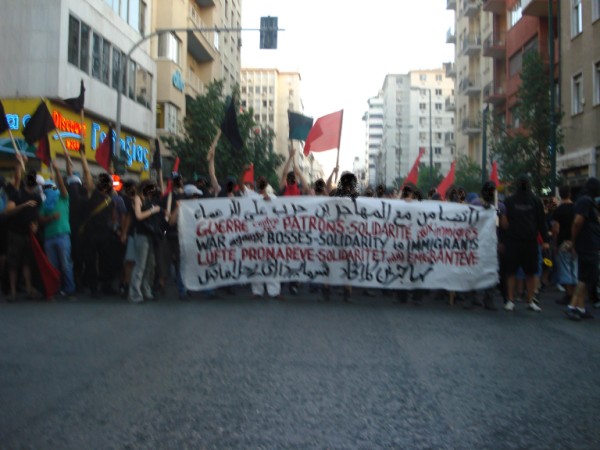 the head of the march, with multilingual banners 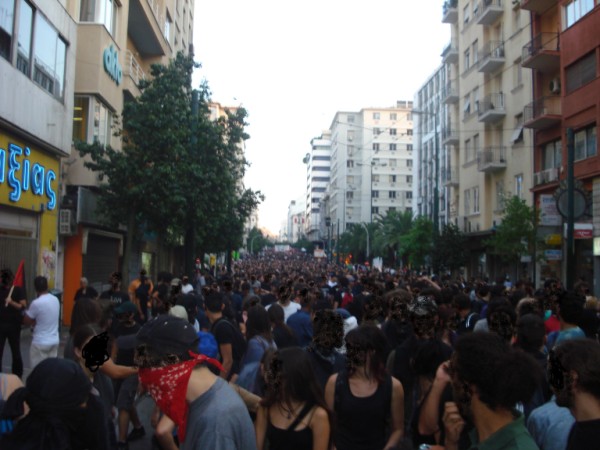 Recently the Greek state and its neonazi thugs seek to intensify their attacks on poor immigrants. Anarchists (most of them are of the anarchist-communist variety, those who read Bakunin and Kropotkin) and antiauthoritarians (a label that includes anyone fighting against state oppresion, not necessarily an anarchist) from Greece called for a march in Athens on 7 July 2009 at 19.00 o'clock, against what they call a "modern apartheid" (refering to the recent attempts by fascists in the Saint Pandeleimonas district, where immigrants many stay, to disallow immigrants from entering into communal spaces such as playing grounds or parks, but also to the cop operations in central Athens "clearing" the city of unwanted immigrants en masse with no regard for their human rights). It worths mentioning that the Greek press and television has taken extreme xenophobic views recently, fully supporting the government's attempt to drive people's attention away from the economic crisis. There are also alarming government plans for all unwanted immigrants to be arrested and held at concentration camps for years.

The call to march was publicised on many places, including the Athens Indymedia (athens.indymedia.org) website, which operates from occupied computing equipment in the Athens Polytechnic university (NTUA), and the government and OTE (the major ex-public Greek telecom company) are desperately trying to locate and shut down. Anarchists in Greece also publicise their news and calls with wall posters, graffiti messages, anonymous blogs, through gatherings at occupied buildings or university campuses, and pirate radio stations (some of them operating from university campuses or near them). It is for these reasons that the Greek state seeks to end the anonymity of blogs and put cops inside university campuses, which are one of the few places in Greece still free of cops (the other one being the Exarchia district in Athens downtown which is traditionally controlled by anarchists and any cops there are attacked with molotov cocktails, even though it is only a few hundred metres away from the high-society bourgouoise district of Kolonaki and the police headquarters in Alexandras Avenue).

The march began at 20.00 o'clock in Omonoia Square, downtown Athens, the capital city of Greece.

Hundreds of counter-information flyers were distributed and a speech was made. The march (as shown in the photos) had about 2500 comrades, and this made the cops to keep themselves at safe distance.

During the march various texts were distributed, anarchist graffiti was drawn, security cameras were destroyed, as well as bank ATMs. The march proceeded towards Saint Pandeleimonas (a neighbourhood in Athens were lots of immigrants stay, who have recently came under attack by fascists) and when the head of the march was about to enter the district the cops immediately fired tear gas and shock grenades, with the comrades replying with stones and flare bombs.

The march had good defence and moved towards ASOEE (a public university in Athens specializing in economics; comrades in Greece take advantage of a sanctuary's law, called asylum, that disallows the cops to enter university premises). There was somewhat of a chaos there for a while, as some comrades where entering the university campus while others were leaving to go fight the cops in the nearby Patision street. The whole Patision street was in fire.

Barricades built with trashbins set on fire were keeping the cops away and after the usual (for Greece) violent fighting between anarchist comrades and the cops (and the huge amount of chemicals released by them) the cops came under a well-organized attack that forced them to take cover in the 3rd September street, while the whole Patision street was again set on fire.

Many immigrants were participating in the march and they attacked Delta guards (Deltades) in Victoria Square (Deltades are stupid thugs the state uses as light-cops until real cops can arrive): when comrades informed the immigrants that real cops were coming to Victoria Square (so that those with no passports could leave in time to avoid arrest and forced repatriation), the immigrants, disregarding their own individual self-interest, attacked the Deltades thugs, who took cover at the nearby OTE bulding (OTE is the Greek National Telecommunications Company, recently privatized and sold to German T-Telekom).

A fascist accidentaly set himself on fire while trying to use the anarchists' weapons against them, a sport the fascists aren't good at.

The anarchists carried multilingual banners in Greek, English, French, Arabic, Albanian, and other languages known to the immigrants. A banner held by comrades carrying black and red flags, both men and women, read: "war against bosses - solidarity to immigrants".

Some of the graffiti created during the march included: "death to fascists" on a bank's window and signed with the anarchists' circled-A symbol; "don't touch the Efetio" on the OTE building (telecom company) walls (the Efetio at the Sokratous Street is a big occupied courts building in Athens downtown where lots of immigrants live rent-free and was recently attacked by neonazi thugs and cops, with the government eyeing to re-take it by force); "cops - TV - neonazis, all the bastards work together" on a shop's security walls and signed with the anarchist circled-A symbol; "immigrants, my siblings, all of us together, black flag we rise to any authority" on a wall and signed with the circled-A; and a big circled-A symbol painted on a bank's advertisement immediately under the advert's words: "we are besides you".

A block of EEK members (EEK or Workers' Revolutionary Party is a Greek Trotskyist political party with about 6,000 votes) was also seen marching in the streets near the anarchists but not really intermingling with them. Anarchists in Greece generally boycott the elections, but a few antiauthoritarians sometimes do vote for small leftist parties. But even the bigger political parties on the left of the political spectrum, such as the Syriza coalition, try to persuade antiauthoritarians that they support their views, because they want to capture for their interests the dynamism of the anarchist and antiauthoritarian scene, which is particularly powerful and influential in Greece, especially amongst the youth. While antiauthoritarians in Greece sometimes do support particular parties, anarchists keep true to Kropotkin and other classical anarchists' call for revolution without representatives. The fact that leftist parties carry on trying to win votes from antiauthoritarians and the anarchist-influenced youth reveals the strong influence of anarchism in contemporary youth culture in Greece, and also explains why the Greek government is so desperate to upgrade its repression and surveillance apparatus (it recently asked the Scotland Yard for help and plans to introduce DNA databases and ban anonymous mobile phones).

A march also took place in Thessaloniki in northern Greece (the second biggest city of the country). Bank ATMs were also set on fire there.

Fire engines were seen driving out of downtown Athens by 21.30-22.00 o'clock after their attempts to put down the fires and the revolutionary spirit with them. But no matter how many fires they put down, they and the whole state apparatus won't succeed to put down the coming revolution, because that's what the people want.