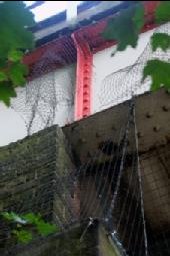 A spokesperson said to The Advertiser:

"The netting has been cut down and the Animal Liberation Front is claiming responsibility.

"We will be watching who puts it [the netting] back up because two organisations were denying responsibility.

"When we find out which one, they will be dealt with accordingly."

The Animal Liberation Front (ALF) carries out direct action against animal abuse in the form of rescuing animals and causing financial loss to animal exploiters, usually through the damage and destruction of property.

The ALF's short-term aim is to save as many animals as possible and directly disrupt the practice of animal abuse. Their long term aim is to end all animal suffering by forcing animal abuse companies out of business.

It is a nonviolent campaign, activists taking all precautions not to harm any animal (human or otherwise).

Because ALF actions may be against the law, activists work anonymously, either in small groups or individually, and do not have any centralized organization or coordination.

The Animal Liberation Front consists of small autonomous groups of people all over the world who carry out direct action according to the ALF guidelines.