Alton Food Festival is an annual event held in July, part of the Hampshire Food Festival, a month long county-wide event held each summer. This year it was held on Saturday 11 July 2009. 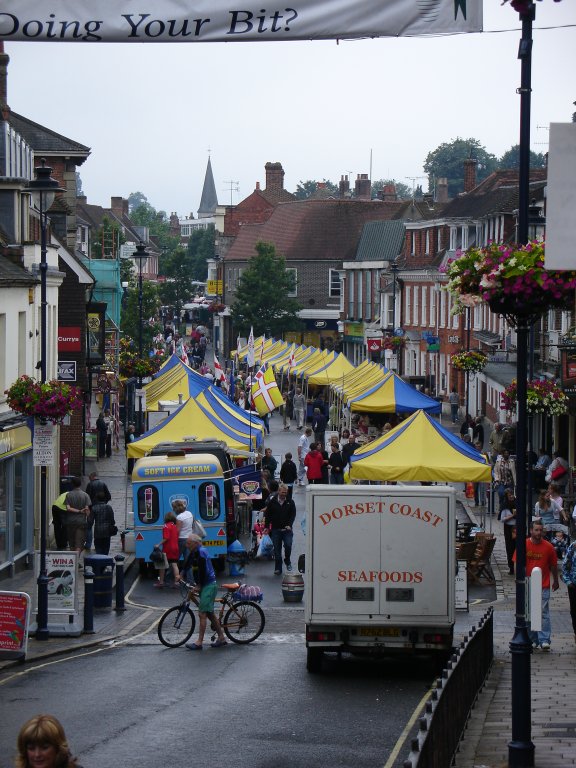 Alton is a small relatively unspoilt market town. Once a year they hold the Alton Food Festival, a celebration of local food and produce.

The trip down to Alton by train, once passed Aldershot, is through pleasant countryside. The line touches the edge of Alice Holt Forest, where you can alight at Bentley and follow a footpath into the forest. There are plans afoot to incorporate Alice Holt Forest into the newly established South Down National Park.

The first Alton Food Festival was fantastic, well worth making a special trip down to Alton.

Last year the festival was not as good and was sponsored by Café Nero!

This year the food festival was not worth making the effort to attend. Earlier in the week I had been at the Guildford farmers market and it was far better.

Why did the festival close at 3pm? You do not hold an event to celebrate local produce, then close at 3pm! During the day, a decision was made to extend the festival until 4pm. Problem was this message did not get through to all the stalls, with chaos ensuing.

At the festival was Thai food, olives, olive oil, pineapples. A celebration of local produce!

Alton is renowned for its water, historically it was the centre of a local brewing industry. In and around Alton are a number of micro-breweries. These were noticeable by their absence from the food festival.

The festival was sponsored by Iceland and the organisers were handing out leaflets publicising that Iceland had opened a new store in the centre of town!

That the festival is now put on by an event organiser, part of a travelling circus, says much for why it has gone downhill. Why was it necessary to involve a commercial event organiser? Guildford is capable of putting on a farmers market, why therefore is Alton not capable of putting on its own food festival? Indeed it is, it put on the first food festival. The first food festival had simple printed sheets with details of the programme for the day. Now a glossy brochure promoting Iceland.

Usually I have a wonder around Alton, but it was a wet, miserable day, though despite the bad weather, the market was well attended. I would have liked to have wondered around the water meadows, but it was too wet.

The most interesting stall was Greening Alton, a group founded last year. Greening Alton is Transition Town Alton under any other name, the same well-meaning middle class mix of naivety and enthusiasm.

Asking everyone to turn off their mobile phone chargers is pissing in the wind, worse it makes people feel good that they have done their bit. Large numbers doing something insignificant is still something insignificant. Though admittedly it is a good habit to turn off appliances not in use. Similarly with the focus on supermarket plastic bags, as it diverts attention away from the real issues of over packaging and actually lets supermarkets off the hook. Focus on what matters – over packaging, and where packaging is used, make sure it is biodegradable or recyclable.

Greening Alton does though have some good ideas. They are carrying out an audit of home energy use. They are looking at the feasibility of a community wind turbine on the nearby and appropriately named Windmill Hill. They have established a community garden, are growing traditional and heritage varieties and are running seed swaps. Seed swaps they have taken one stage further with swaps of seedlings.

The most important steps anyone can take after ensuring their home is well insulated is to turn down their heating by one degree and to walk and cycle, not use the car. Then you get real savings in energy use that make a difference. The next step is to stop buying crap, get out of the throwaway society.

I recommended that they obtained and read

Had I thought, I would also have recommended

I would also suggest they talk with their local independent cinema and show a few food films. Try Black Gold, End of the Line, Food Inc, The Real Dirt on Farmer John. Hopefully we will see these films available at the Anarchist Bookfair this autumn.

These films were discussed on the Food Programme on BBC Radio 4 on Sunday lunchtime (repeated today at 4pm).

Slow Food Italy has recognised the power of food films and now runs a slow food film festival. This has been taken up in New York with the New York City Food and Film Festival.

At the top end of town, opposite the Curtis Museum, is a little Italian restaurant. I had a cake and a pot of tea. I regretted that I did not have lunch there as their ravioli is fantastic. Instead I had a burgher off one of the food stalls. It was disgusting and I felt the worse for it the rest of the afternoon. In the restaurant I was quite impressed to see two young girls on different tables tucking into the food. It is a pleasure to see that some parents treat their children to decent food, not engage in child abuse by taking them to the local McVomit's. This little shop also sells traditional seed varieties imported from Italy. We are what we eat!

It says much for a food festival when one ends up shopping in the local M&S! All I got off the stalls was a punnet of local strawberries, which I have to say were excellent.

I regret I did not have time to pop into Brock's Farm Shop which I usually visit on a trip to Alton.

Briefly looking in the Curtis Museum, I was told the food festival to visit is the Watercress Festival held in the spring in Arlseford. You get to Arlseford by alighting at Alton Station, then catching an infrequent steam train on the Watercress Line to Arlesford.

Alton Station is a very unusual station. Half is in the present day, the other half is in a 1950s, if not pre-1950s, time warp. If one is lucky, one sees a steam train. I was very lucky. I saw a steam train when I arrived and another when I departed.

The highlight of the day was not the Alton Food Festival, wondering around Alton, eating at the Italian restaurant or visiting the local museum, but being invited up onto the foot plate of a steam locomotive!

The only good thing to be said about this year's Alton Food Festival was that it was better than the Italian market that I visited in Farnborough the previous day.