The Central Intelligence Agency’s secret assassination squad was allowed to operate anywhere in the world, including the United States, according to a Thursday report in The Washington Post. “The plan to deploy small teams of assassins grew out of the CIA’s early efforts to battle al-Qaeda after the Sept. 11, 2001, terrorist attacks,” the paper reported. “A secret document known as a ‘presidential finding’ was signed by President George W. Bush that same month, granting the agency broad authority to use deadly force against bin Laden as well as other senior members of al-Qaeda and other terrorist groups.” 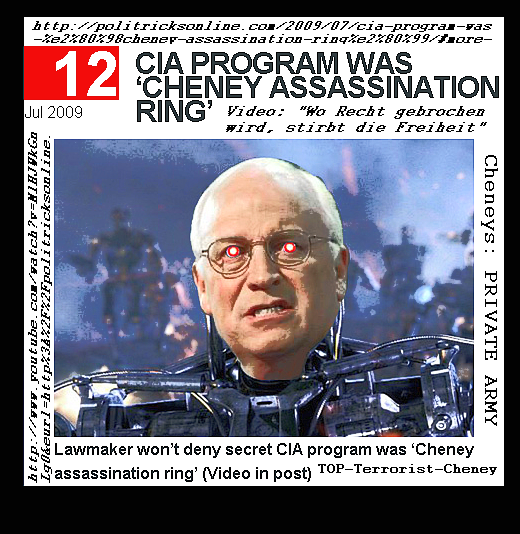 Reporter Joby Warrick added: “The finding imposed no geographical limitations on the agency’s actions, and intelligence officials have said that they were not obliged to notify Congress of each operation envisaged under the directive.”
This revelation, buried in paragraph 12 of the Post’s report, was highlighted by Talking Points Memo’s Zachary Roth later in the afternoon.
“‘No geographical limitations’ presumably means that operations could potentially be carried out in countries, friendly or unfriendly, that are far from any war zone — including even the US itself,” he opined. “And it seems likely that they would be carried out without notifying the foreign country in question.”
Roth continued: “Of course, we’ve frequently, and quite openly, used the military to carry out attacks on specific Qaeda leaders — even before 9/11. But using the CIA to do so, and with such broad authority to operate anywhere in the world, as this program seems to have given the agency, would appear to take things into a different realm.”
‘Every president since Truman’
According to historian Christopher Andrew, under questioning by New York Times reporters and editors in 1975, President Gerald Ford explained that U.S. intelligence documents must not be revealed to the public because the revelations would “blacken the reputation of every President since Truman.”
“Like what?” he was asked.
“Like assassinations!” replied Ford, who later insisted the comment be kept “off the record.”
The discussion was held following Ford’s recent receipt of the CIA inspector general’s now-infamous report informally known as the “Family Jewels.” It revealed hundreds of CIA indiscretions ranging from experimenting on soldiers and prisoners with illegal, hallucinogenic drugs to assassination plots against South American leftists.
“The Times group returned to their bureau for a spirited argument about whether they could pass up a story potentially so explosive,” noted reporter Daniel Schorr. “Managing Editor E. C. Daniel called the White House in the hope of getting Nessen to ease the restriction from ‘off-the-record’ to ‘deep background.’ Nessen was more adamant than ever that the national interest dictated that the president’s unfortunate slip be forgotten. Finally, Sulzberger cut short the debate, saying that, as the publisher, he would decide, and he had decided against the use of the incendiary information.”
Schorr, who reported Ford’s comment for CBS News later that year, would later reveal that the president was not speaking about specific killings, but assassination conspiracies. In Schorr’s follow-up, then-CIA Director William Colby insisted that the agency had not been involved in assassinations since 1973.
However, on Sept. 21, 1976, Orlando Letelier, a leftist Chilean political figure-turned Washington, D.C.-based, anti-Pinochet activist, was assassinated in D.C. by a car bomb. The act of terrorism also claimed the life of his assistant, Ronni Moffitt. ..... Report: ‘No geographical limitations’ on CIA assassination program ..... More:

http://rawstory.com/08/news/2009/07/16/report-no-geographical-limitations-on-cia-assassination-program/ .....
According to Mark Zepezauer in his book “The CIA’s Greatest Hits,” the agency knew a “hit squad was in the US and headed for Washington.”
The hit was ordered by Chile’s Dirección de Inteligencia Nacional (National Intelligence Directorate), part of the country’s secret police under dictator Augusto Pinochet.
“After the bombing, the [CIA] purged its files of photos of the assassins,” Zepezauer added. “The CIA and DINA then began planting stories in the press suggesting that Letelier had been killed by leftists seeking to make a martyr of him. … The FBI figured out the identities of Letelier’s assassins within weeks, but didn’t charge them until the CIA’s cover-up unraveled several years later.”
He concludes: “Apologists argue that no one can prove that Letelier’s convicted assassins, ‘former’ CIA agent Michael Townley and two Cuban exiles, were acting under agency orders. But if they weren’t, why did the CIA immediately begin covering up for them?”
In 1976, President Ford issued an executive order banning U.S.-sponsored assassinations.
Published: July 16, 2009 .... By Stephen C. Webster -

Picture: Lawmaker won’t deny secret CIA program was ‘Cheney assassination ring’ (Video in post)
Early Friday morning, MSNBC followed up on a theory posted Thursday on the Huffington Post which alleged that a secret CIA program shut down in June by director Leon Panetta could have been related to a purported effort led by Vice President Dick Cheney to assassinate intelligence targets abroad.