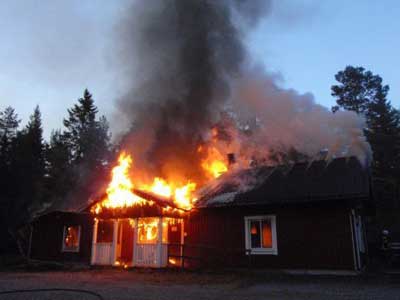 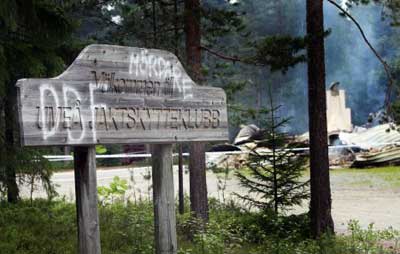 "In the night from 11th to 12th of May, 40 hens were liberated somewhere in the south of Holland.
Freedom for all! ALF"

Early in the morning of July 16, Umeå Jaktskytteklubbs, a shooting club for hunters, was burned to the ground. The building was completely destroyed. "DBF" (Djurens Befrielsefront, Swedish Animal Liberation Front) and "Murderers" were painted on a sign at the entrance.
(photographs: Räddningstjänsten, Per A Adsten / www.folkbladet.nu)

"Incendiary attacks at 2 fur and leather shops by the FLA in Guadalajara, Mexico

In the early morning hours of July 16 the compañeros from the FLA in our town went out to attack, expressing their hatred against the use of animals as objects to wear, as food, or as entertainment; this time making a direct blow against the fur and leather industry. Not allowing the flame of the struggle for freedom to be extinguished, this time they directed themselves at 2 leather footwear shops and in each sprayed more than 3 liters of gasoline which spread through the wood floor, the products and the facility. The alarm went off at one of the locations seconds after the fire was started and almost prevented starting a fire at the other, but one of the compañeros without worrying that the police were approaching, went to the other location and started a fire. A message was left, 'ANIMAL LIBERATION F.L.A.' in order to make clear our ideological purposes which are feared by many in the system. The following day we saw the damage done, the 2 locations were completely burnt; we noticed that the message we had left in paint was removed the next day as an effort to try to cover up the actions of the animal liberation movement. We will continue to attack all exploiters of animals and the earth.

Light the flame, that Leon will also burn!"

"During the night of July 13 we spray-painted both Havgårds Päls (fur shop in Malmö) and the owner's house.
The struggle continues.
- DBF"

"On Sunday the 12th of July, the ALF continued their harassment of Ralph's Meat Exporters in South Melbourne by gluing the locks and covering the building in paint, including 'Factory Farms are a living Hell' and 'ALF'."

Combatants for total liberation announced their presence with complete success during the early morning hours of July 14, acting with conviction and feeling in doing the following things.
The actions consisted of sealing with glue 5 meat markets and one poultry shop. As we all know these are establishments of animal exploitation.
For that reason we will continue to act, we will continue being that bothersome pebble in their shoes, so that we can stop all the shit imposed by this shitty system, once again demonstrating that this can be done actively and showing that the liberation of animals and the earth are not just words.

Liberatory greetings to all those who take action!
For all those who suffer to satisfy the stupidity of speciesism!
Total Liberation!
Revolution Now!
F.L.A. (Leon gto)"

ANGLERS LOCKED OUT OF THEIR VEHICLES (Ireland)

"Two anglers vehicles in the south east of Ireland had their locks glued tight as they were hauling bodies from the water.

A LITTLE SQUIRT OF GLUE (Mexico)

Today, Monday, June 6th, our cell returned to demonstrate our anger against those who are responsible for animal exploitation; rising from a quiet and tranquil morning in a surge of feeling against these people who sell death. A little squirt of glue and a few clips were the perfect tools for this morning, sealing the padlocks of 2 shops where the 'products' once had a face. At the 2 locations the padlocks on the shutters were completely sealed. This is clear proof of what is possible with imagination and the desire to make them know what a threat we are! Beginning to make them feel the fear that doesn't even come close to that of their victims...
FLA"