Save Vestas - Defend Jobs, Save the Planet - Support the Occupation
Workers at the Vestas Wind Turbine factory on the Isle of Wight have JUST NOW occupied their factory. They are fighting for 600 jobs and the future of the planet. They need help now.
PLEASE TEXT AND CALL EVERYONE YOU KNOW.

There is a large picket of support starting outside the factory. This will be crucial in giving people confidence inside. We want hundreds of people by morning.
If you are not working, come now, by car, bus or train.
If you are on the South Coast and working, come for the night and go to work exhausted and proud.

WE WANT HUNDREDS OF PEOPLE NOW. SAVE THE JOBS - SAVE THE PLANET.

The workers want Gordon Brown to step in as if it was a troubled bank and save the jobs and keep making wind turbine blades. They gave the bankers trillions. They say they care about climate change. He has talked about creating 40,000 "Green Jobs", the first step should be protecting these 600.

The workers will need solidarity - donations of money, food and other assistance. In the first instance please send messages of solidarity to

We will suggest other forms of solidarity soon. Do this now. Reach for your phone. 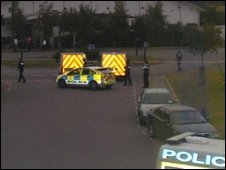 How to get involved - practical info

If you want to go to the Isle of Wight and join the campaign there, as many activists from around the country have already done:

Both arrive at the National Express station on Harbour Parade in Southampton, about ten minutes walk from the Isle of Wight ferry terminal (the Red Funnel terminal). To get to the terminal:

3. Turn right at Bugle St
Destination will be on the left


Red funnel ferries cost £7 at the desk, and from £4 booking in advance online. When you arrive on the Island, take the chain ferry from East Cowes to Cowes, then the No. 1 bus to Newport from the stop on Newport Rd. To join up with one of the existing support networks on the island contact Ed Maltby on 07775 763 750.

For more information about the campaign on the Island and what you can do, email

NOTE: It would be helpful if other networks on the island could comment on here giving contact details - it's easier for people to get involved with an existing effort than just to go over by themselves not knowing what they can offer.