The Celtic Manor Resort was left with smashed windows and breached security after they hosted a major arms conference this week. There was also protest outside with remarkably light policing and not a FIT camera in sight. 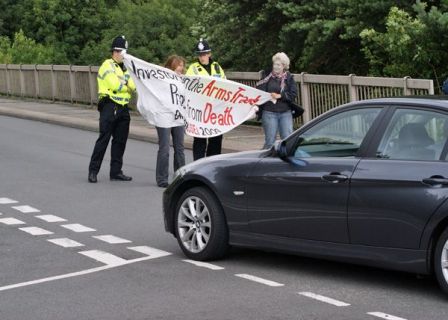 The UV Europe conference was a trade fair for unmanned aerial vehicles (drones) and involved a large selection of the companies that make huge amounts of money from flogging weapons to dodgy regimes. Companies drumming up sales included EDO MBM and a number of big names in the arms trade.

The conference took place in the lead up to the worlds biggest arms fair, DSEi (Defence Systems and Equipment International), which will be at the Excel Centre, London this September.

Demonstrators turning up yesterday were told the Resort “would have been tolerant of protests”, but they were in no mood to be nice after thousands of pounds worth of damage had been done to the doors and windows of their Manor the night before.

Police were employed to keep protests at arms length, but failed to keep all of them out. One individual got in to have a look around, later delivering a note to the police pointing out the blatantly obvious, ‘your security is pants!”

A national demonstration to target the arms trade and its investors has been called by Disarm Dsei for the 8th September. Plans are to congregate in the City of London from midday. Further details to be announced.