Talented poet and former nuclear foreman Duncan Ball died on July 17th aged 49. He was a man who tried repeatedly to blow the whistle on unsafe practices in the Magnox plant at Sellafield where he was employed as a foreman. His subsequent experience followed the same route as the dissident scientists who were sacked from Sellafield after expressing doubts about nuclearsafety in the 70’s (NEW STATESMAN July 1983) 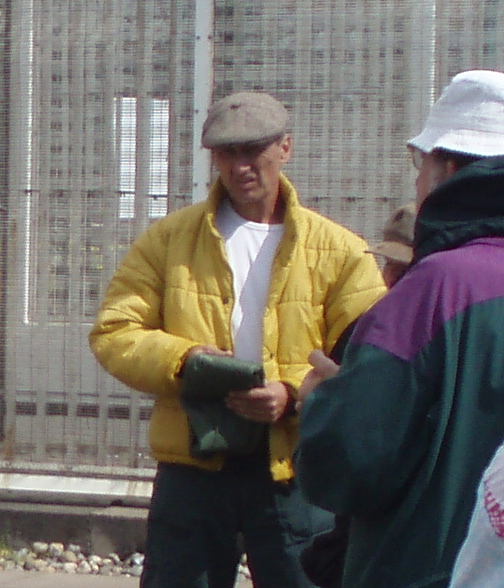 Duncan Ball outside Sellafield during Peace Vigil of 2007

Having tried all avenues to raise the alarm about unsafe practices causing releases of radiation, in 2004 Duncan left what he called a “literary bomb” in the Sellafield visitor centre. This was nothing more harmful to the general public than a CD which contained a detailed log of dangerous practices within Sellafield. Duncan who lived in Penrith was jailed for 2 years.

Duncan’s poems chronicled the nuclear industry and include one that was read out publicly at the recent international “Lakes for Living” conference in Windermere.

"For nuclear waste growing bigger and hotter
they're sucking the life from Lakeland and Otter,
cooling the poison they've shipped from afar
condemning the angler and Arctic Char.

"What's the harm? There's water aplenty!"
Say the loudest mouths with heads near empty,
while for son and daughter the waters spoil
cooling waste in the kettle I fear will boil…"

Along with many other Sellafield workers Duncan was under the Compensation Scheme for Radiation Linked Diseases for terminal cancer. In April of this year Duncan came along to support Radiation Free Lakeland’s sponsored walk around Wastwater to raise funds for Chernobyl Children’s Project.

A spokesperson for Radiation Free Lakeland said “ Duncan was described and discredited by the nuclear industry as “obsessive” but the truth is he was a hero whose only crime was trying to alert his employers and the wider public to dangerous practices in the nuclear industry. His voice will still be heard for generations to come through his wonderful and prescient poetry – Cumbrians need to listen to the truth of what Duncan had to say”

More of Duncan’s poems can be seen on the Radiation Free Lakeland website:

Unimportant Incidents
Duncan Ball | 15.03.2006 02:05 | Ecology | Repression | Social Struggles
A view of what life was like in the Magnox Reprocessing Plants at
Sellafield, once upon a time?