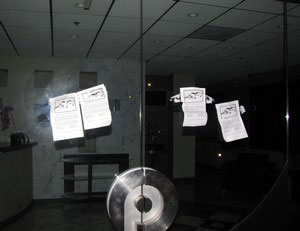 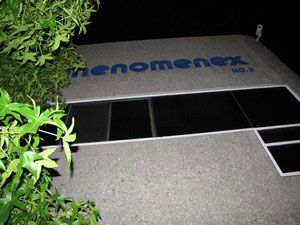 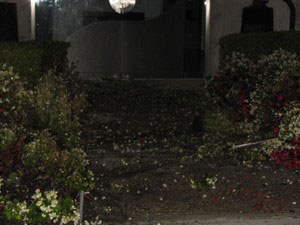 "In solidarity with SHAC North America's launch, the underground of Los Angeles made note and paid a quick visit to Phenomenex's Torrance location on 7-18 to leave a calling card.

Fliers were taped to the windows and their flowerbeds were trashed and their lawn signs bent up and ripped from the ground. It's hard to stomach the idea of what Phenomenex provides Huntingdon Life Sciences, and to ask them to merely quit working with HLS is what we demand - Phenomenex, you're in that quiet little business park in Torrance and your building is a nice safe distance from others. This was just a calling card - a friendly request - we suggest you take it. DROP HLS NOW. Phenomenex provides the restraints to Huntingdon Life Sciences - restraints so that animals are still while poisons can be pumped into them the times a day - day after day until they die.

This action was carried out as a call for the underground to immediately FIND a local HLS collaborator and pay them a visit NOW - anyone from Staples to Novartis and GSK, let them know their bloody ties to HLS are not forgotten

"During the early morning hours of the 16th of this month the Frente de Liberación Animal in Leon GTO turned up at a site which belongs to a mega-business of animal exploitation ('carnitas'), well known in the city of Leon; this fucker is enormous! They rely on their own trailers to transport our nonhuman brothers and sisters; our cell acted, knowing nothing could stop us.

The sabotage consisted of burning a type of trailer that many may already be familiar with (those with bars used to transport pigs), and one more, that spread death to many other locations of this stupid company.
They suffered a huge economic loss of about 200,000 pesos; everything went successfully leaving the trailers completely burned.

After hearing the local news we realized that the speciesists were very scared believing that this was a threat because of problems they had amongst themselves. But we know that is not so, and we will battle until the end when we see all this shit collapse! .. animal liberation now! .. more than just words!

Liberatory greetings to all the cells in the world!