Last Saturday, 25th July, activists gathered outside Dalston Kingsland shopping centre, for a demonstration against the army showroom which recently opened there. 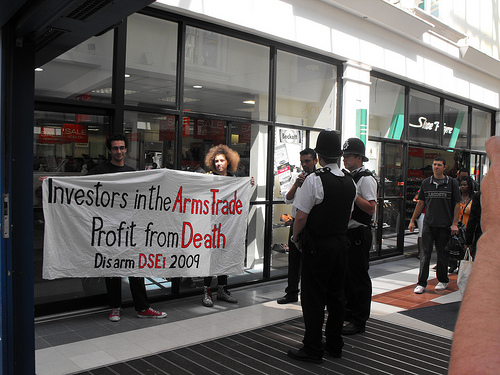 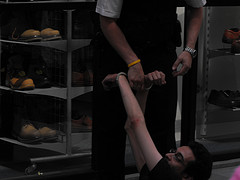 By 1.30, around fifteen people had assembled by the main entrance. Two activists from Disarm DSEi, who had been inside the building looking for the demonstration, decided that they would exercise their right to peaceful protest inside the shopping centre. Unfortunately, the police and security guards seemed to have no interest whatsoever in facilitating this right.

The two activists had hardly got their banner out, before they were being told to leave. Naturally, they attempted to get a reason for this from the security/police. Aside from a bit of feeble mumbling about private property and obstructing people (despite the protestors having their backs to a shop front), no real reason was given. Instead, the police opted to remove the protestors by brute force, pulling and pushing them towards the exit, resulting in both of them, and at least one of the cops on the floor. The police tried to use this opportunity to seize the Disarm DSEi banner, but one of the activists, along with people from the protest outside, managed to hold on to it, before being pushed forced from the shopping centre.

While this had been taking place, the other activist had been placed in handcuffs and arrested inside the centre, with a line of police forming in front of the entrance. Knowing it wouldn’t do any favours to their public image to blockade a busy shopping centre on a Saturday afternoon, the police attempted to screen the crowd, not letting anyone who they thought looked like a protestor through (this included any member of the public who had happened to photograph the incident).

Chants were started outside of ‘Let him go! Let him go!’, but it wasn’t long before he was taken to nearby Stoke Newington police station. A small group followed him there and managed to get in contact to find out that he had been arrested for breach of the peace and assaulting a police officer.

He has subsequently been refused bail, and is being kept in until Monday morning, when he will be in Thames Magistrate’s Court at 10.30am. Anyone court solidarity, would be much appreciated.

It’s vital that we stand up for our right to protest on our own terms and don’t let the bullying tactics of the police intimidate us.

For full set of photos see