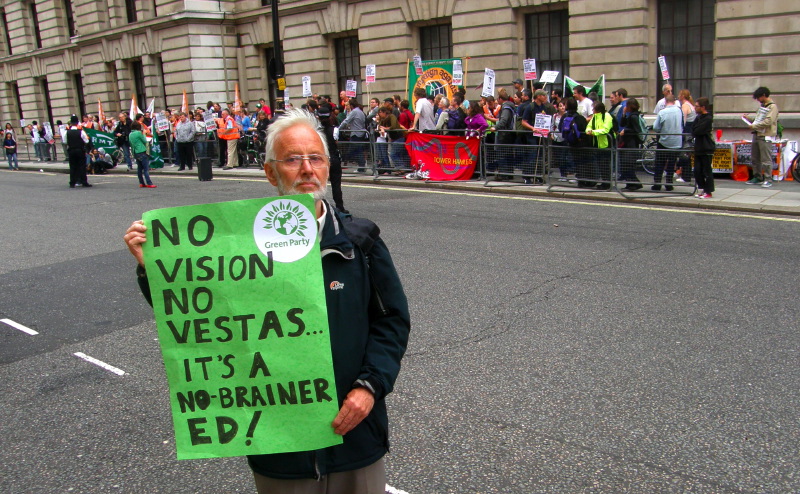 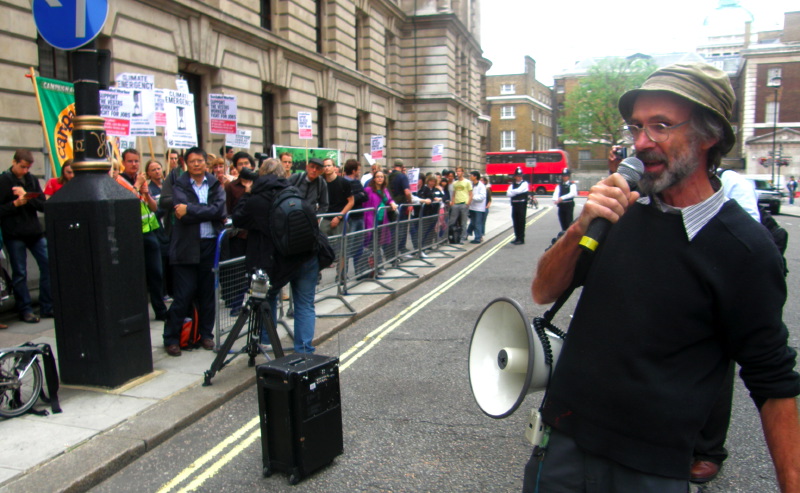 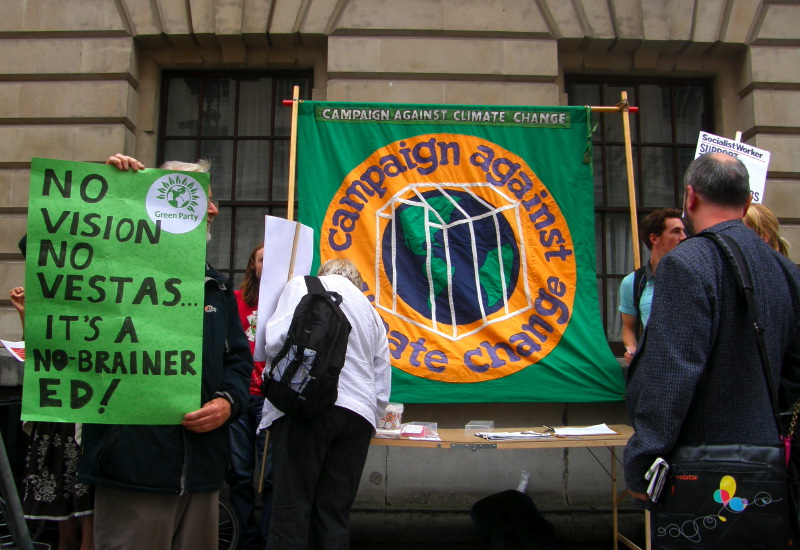 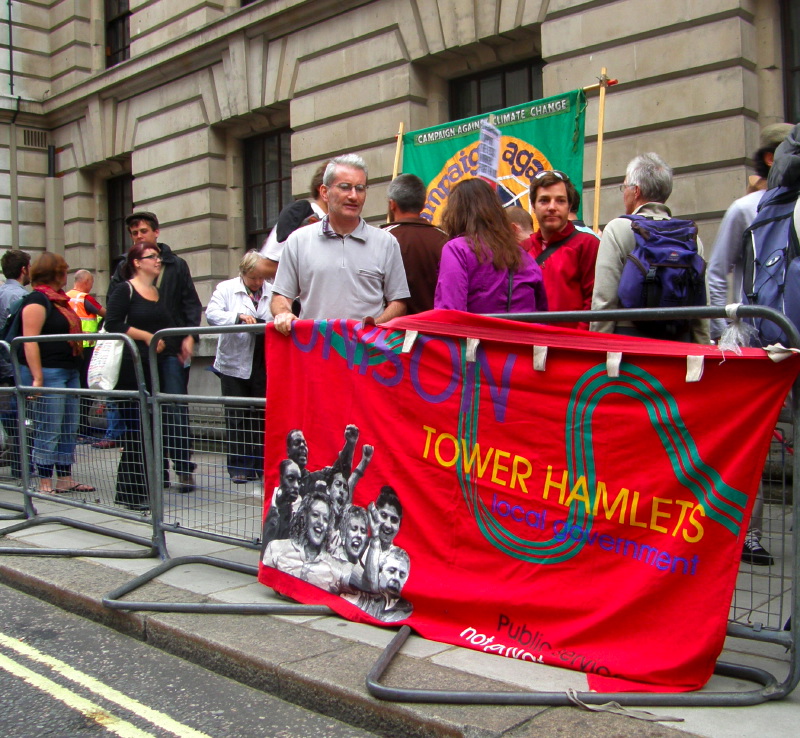 B2. Solidarity in UNISON 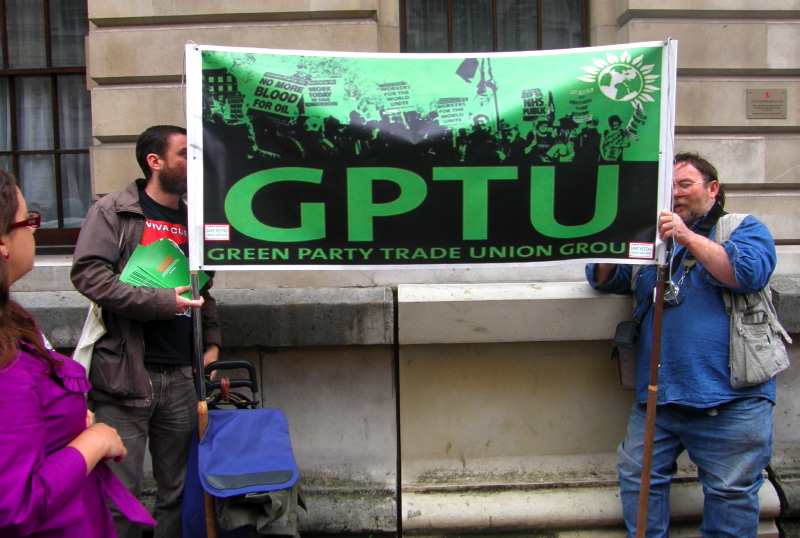 B3. Greening the Working Class 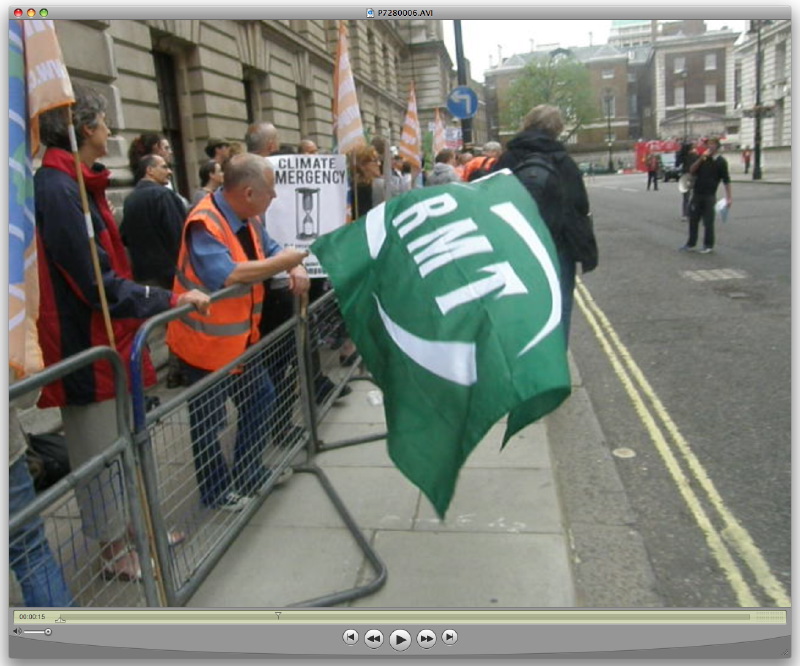 B4. Flying the Flag for RMT Solidarity (video still) 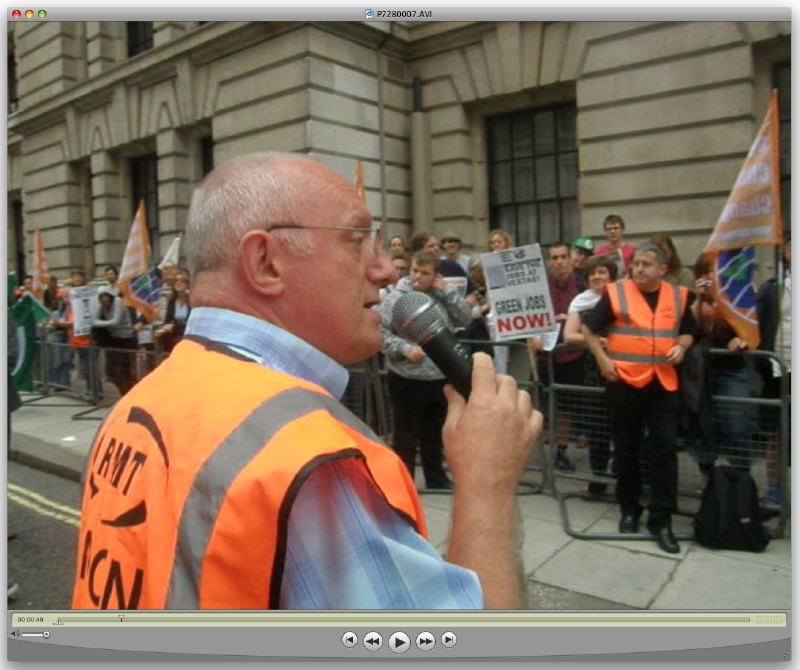 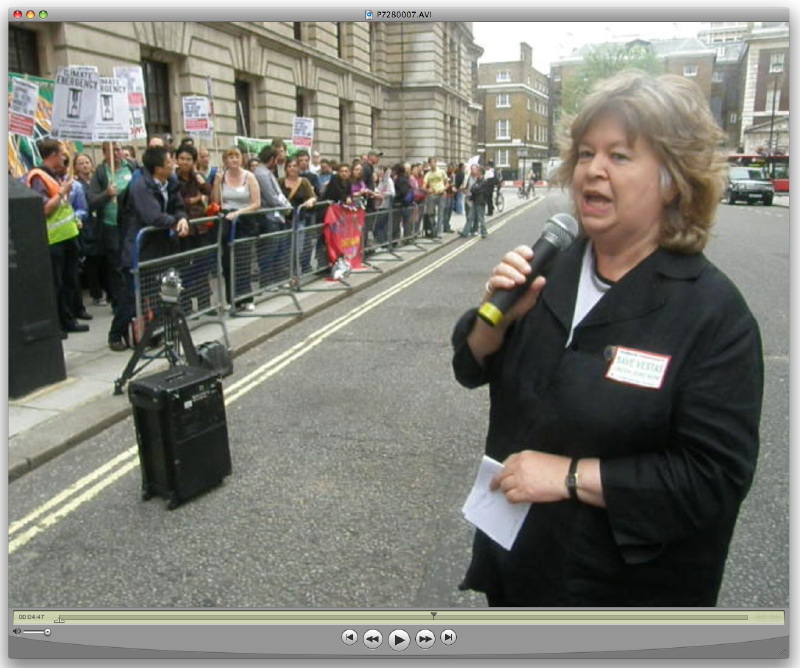 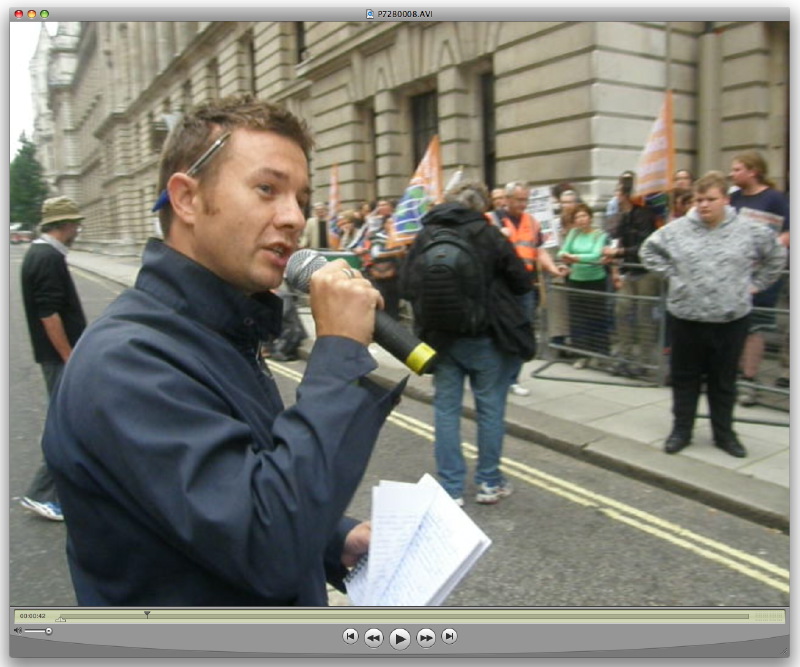 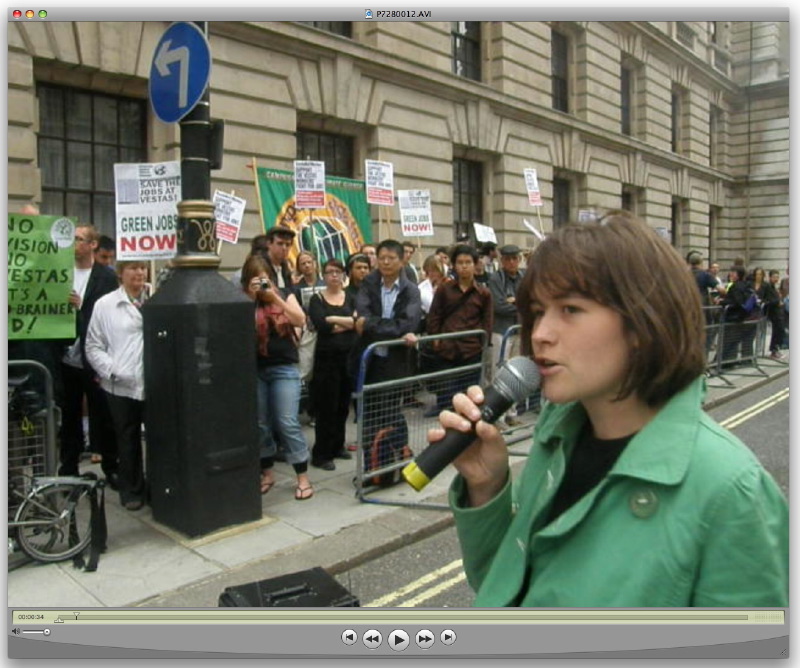 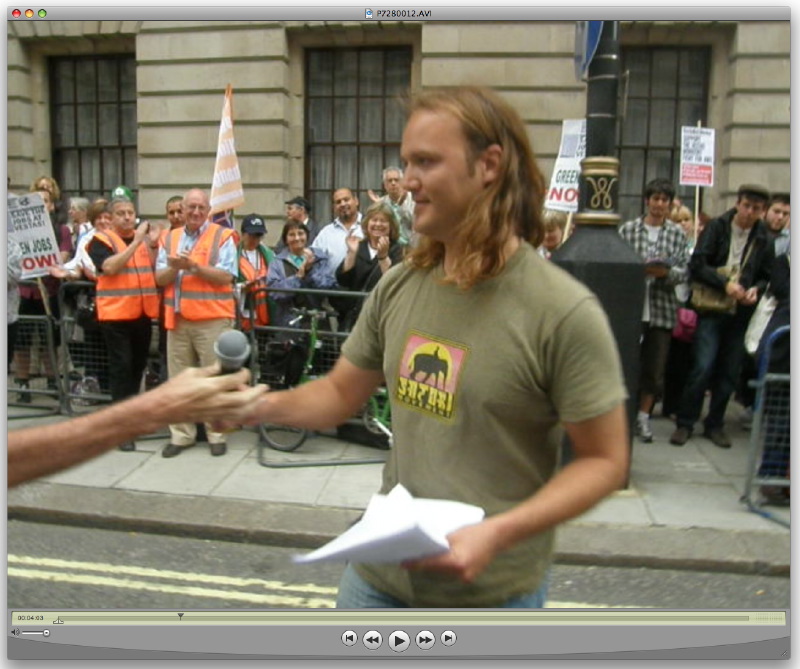 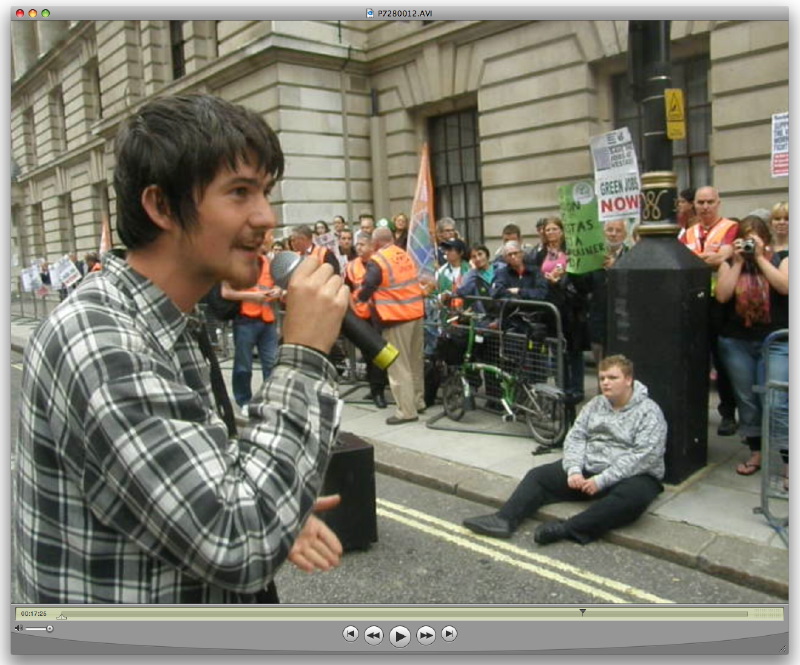 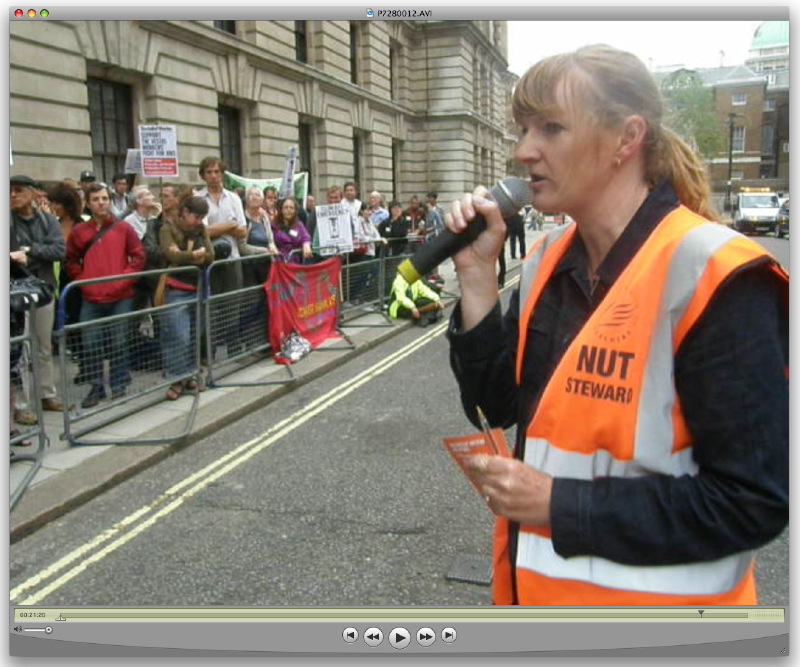 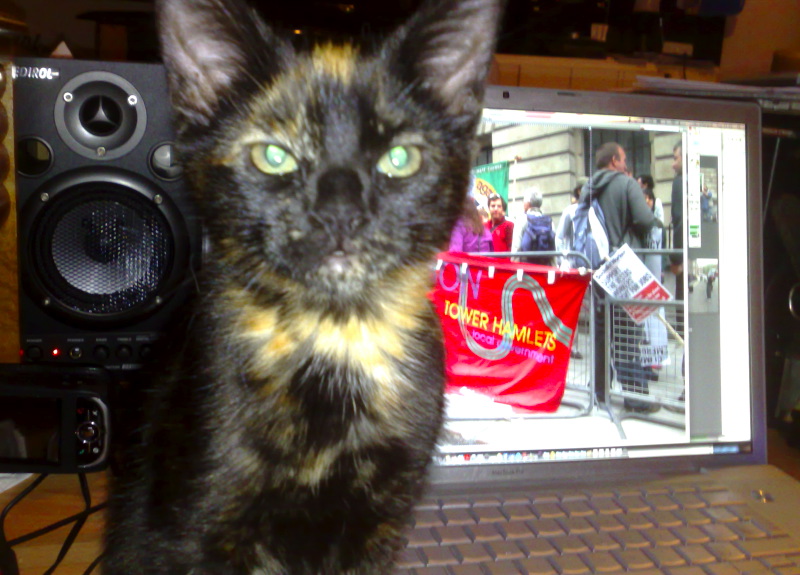 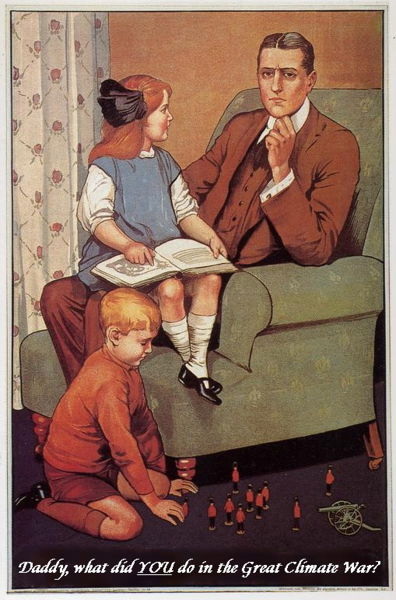 C9. Act in Solidarity Now – recount tales of our victories at your leisure

http://london.indymedia.org.uk/articles/1796 ), a grand coalition of the sane applauded a succession of Trade Unionist and Environmentalist speakers, who railed against the insanity of allowing a profit-hungry anti-TU corporation to shut down wind turbine blade factories and destroy the livelihoods of 625 skilled manufacturing workers for a faster buck to be made elsewhere.

To say that “New” Labour wide boy Ed Milliband’s response to this crisis has been as weak as a homeopathic concoction would be to understate the miniscule magnitude of its weakness: see his ‘Britain should rally round to protect our wind turbine industry’

http://www.guardian.co.uk/environment/cif-green/2009/jul/23/ed-miliband-vestas-wind-power at the Grauniad and his round robin response to my ‘It's “Money Where Mouth Is” time for UK Wind Turbine Manufacturing’

http://dalinian.pbworks.com/It%27s-%E2%80%9CMoney-Where-Mouth-Is%E2%80%9D-time-for-UK-Wind-Turbine-Manufacturing open letter for the pitiful details. I’ve been too busy with active solidarity to pen a reply, but the best rebuttal I’ve seen comes from Edward Maltby of occupation-catalysers Workers’ Climate Action – see ‘Labour's green rhetoric is hollow unless it acts now to protect Vestas – Nationalisation of the turbine plant is the only rational option’

http://www.guardian.co.uk/environment/cif-green/2009/jul/27/vestas-wind-plant , also in the Grauniad.

I’ll let the pix-&-vidz speak for themselves, and hope that you are sufficiently moved to take solidarity action with our brave comrade workers in occupation of their green energy factory. Best would be joining the Vestival – pack a tent and get down to the Isle of Wight, to join the growing Solidarity Camp at the factory gates. And since not everybody can do so (including me – Red Rosa needs daily play), there are plenty of other suggestions contained in the Vestival Event Posting

In 2009, the grand victories for our class won by the Workers Occupations of Visteon factories, and by the Mass Solidarity Wildcat Walkouts which fed the Lindsey Oil Refinery EPIC WIN, show just how shaky the bosses are. While their class caused the ecological and economic crises which jeopardise our biosphere and civilisation, now our class needs must show its mettle in leading the just transition to a zero carbon future. An equally EPIC WIN for the Vestas Occupation will be a resounding victory for our class, for humanity, and for our global ecosystem – let’s make it so!


All these photos and video clips are 'CopyLeft'
This means you are free to copy and distribute any of my photos and videos you find here, under the following license:
• Creative Commons Attribution-Noncommercial-Share Alike 3.0 Unported License
»