A good sized crowd (considering the weather) gathered outside the IET at Austin Court where Ed Milliband was promoting his new eco-business strategy, to show their solidarity with workers occupying the Vestas factory. Buoyed by the recent court victory they tried to convince passing attendees to push the advantage. 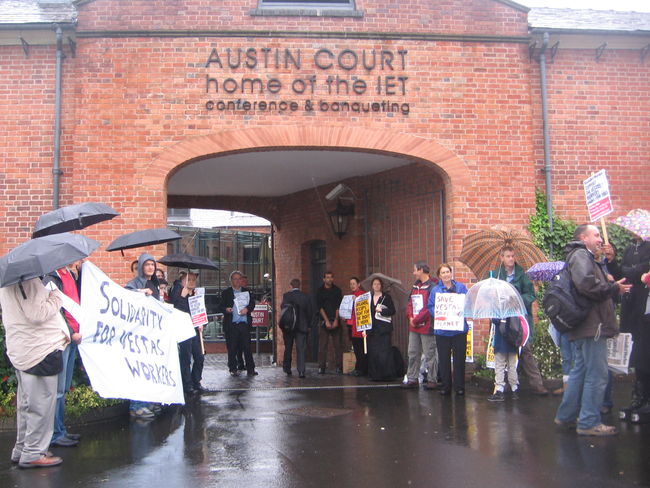 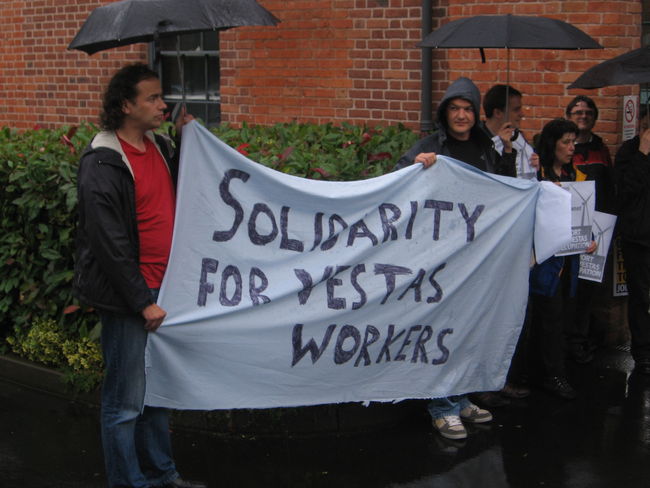 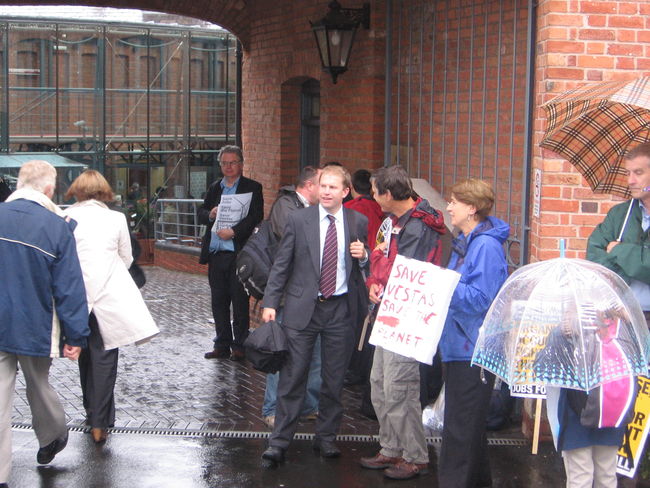 The meeting was held at the IET at Austin Court (see pictures) and featured renewable industry insiders like the British Wind Energy Association as well as some lobbyistas from Friends of the Earth. A few security guards held back the crowd and West Midlands police came down to have a look but perhaps due to the bad weather or the presence of the SWP (who are much better at policing protests) didn't stay. Details of the meeting had been hard to come by and had arrived at short notice (although it had apparently been ticketed) and you would be forgiven for getting the impression they may have been trying to keep the plebs out. A good sized group formed (including a Vestas worker) at the entrance to Austin Court and tried to talk to the passing attendees. FOE lobbyistas (amongst others) on the inside, pressing flesh with the good and the great, looked on worriedly fearing a possible rush on the building, but after an hour of getting drenched someone from the SWP decided the picket should end and told everyone to disperse and march over to the council house to hear from a Vestas worker and some of the regular Birmingham-based CACC/SWP fixtures.

Some attending the meeting (and the protest) were arguing that 'nice guy' Ed Milliband had done a lot for climate change and (probably) supports the Vestas workers but 'dark-lord' Mandelson is holding the government back from stepping in, and so we shouldnt be giving Ed a hard time. But then if everything 'nice guy' Ed has been saying for the past two weeks is being completely undermined by the actions of his government, maybe he should just resign?


What you can do

* Send messages of support from yourself or your organisation to

ps.ed.miliband@decc.gsi.gov.uk. His phone number in his Doncaster constituency is 01302 875 462, and at Westminster, 020 7219 4778. Flood him with calls for the Government to take over the Vestas factory and keep it producing, under new management.
* Organise a visible demonstration of solidarity. Take a photo with a placard that reads “Save Vestas” and email the photo to

http://petitions.number10.gov.uk/SaveVestas/ on the No.10 site and