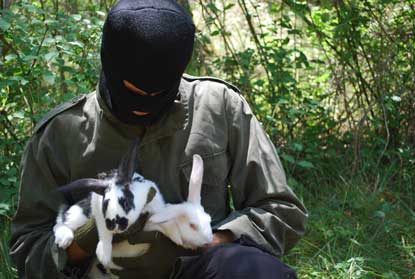 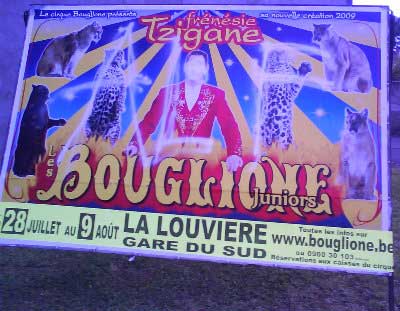 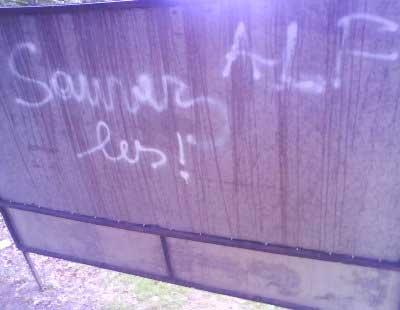 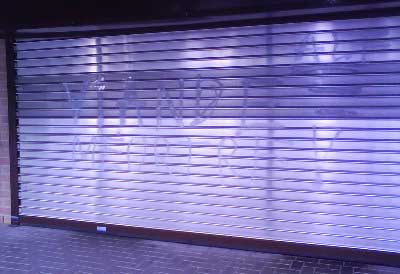 "On July 24, 2009 we liberated 10 rabbits from a farm on the outskirts of Bilbao. There, animals crammed in cages awaited their death to become a product of the food industry.

Anyone who lives a life that is not completely exempt from products of animal origin is responsible for animal exploitation. In order to not be part of this bloody industry it is necessary to adopt, as a first step, a way of life that rejects speciesism and that does not use products derived from animals.

These types of actions may seem 'insignificant' to some people. For them there is no need to note that these are 10 individuals who feel, who have been liberated from the bars, the fencing and from the executioners who had been bringing an end to his or her life: the slaughterer and the consumer.

Every action has an impact - Every life saved is a victory

"Liberation of 2 roosters from a private breeder by the FLA in Guadalajara, Mexico

During the night of July 30th our cell decided to infiltrate a site where roosters are bred for fighting. We approached the place and with cutters we made a hole in the metal fence big enough to allow us to pass through. After going futher inside the place to make sure it was secure we opened some of the cages and took out 2 roosters and put them in a sack big enough to carry them, then we decided to get closer to the other cages to free the other animals but one scared rooster started to make so much noise that he woke the owners and we decided to flee. Although we did not succeed in liberating all the roosters, we did give 2 of them the opportunity to live freely in a natural environment.

UNTIL ALL CAGES ARE EMPTY!"

"Anonymous activists opened the fences that kept a big boar imprisoned in a wood near Genova, Italy. The boar had been captured with sedatives and ropes because the Region decided he was a menace for humans. A so-called animal welfare organization built his 3mx3m prison and kept him there in isolation to save him from hunters going after boars. After being freed he was seen rejoining immediately with other boars that arrived to cheer his freedom."

"Armed with petrol and matches we walked up onto the moors in the pennines and found a number of wooden grouse shooting butts and hide outs.

When we found some which were suitable and surrounded by mud so the area would not catch alight we covered them in petrol and burnt them to the ground.

Let this be a beacon to the shooting industry that we will no longer stand aside and watch you slaughter millions of animals annually for your perverse sport.

"July 31, Livorno (Italy)
Local newspapers report direct actions against 3 fur shops in one night. Locks have been glued and spraypainted messages left on place, signing them with the name Alf."

"This night of 29 july in La Louvière (Belgium) we risked being arrested for vandalism, turn by turn one of us watched in case the police or vehicles arrived while the others painted some messages on the giant advertisings of an animal circus 'Bouglione Juniors'.

Later in the night, we painted 'MEAT = MURDER - ALF' on the butcher shop 'Renmans'.

We also paint a STOP signal with the slogan 'STOP EATING ANIMALS'.

We have done this action of propaganda for animal liberation through graffiti with the intention of adding ourselves to the call for illegal actions against companies how exploit animals.

To Bouglione: Stop to use animals in your show! Circus with animals are not fun for them! We will strike again!

The day of the animal liberation victory will be the first day of peace on the Earth.

GO AND FIGHT FOR THEM NOW !

"On the Bramham Moor Estate near Wetherby we found a large pheasant pen which was thoroughly dismantled.

"Arson attack on business of death by the FLA in Guadalajara, Mexico

In the early morning hours of July 29 our cell took to the streets again so that the exploiters of animals and the earth would not be allowed to sleep, once again dealing a direct blow to their businesses and shops. This time we visited a meat business called 'Carnitas Uruapan'; we got close and sprayed gasoline on their wooden doors, letting the fire spread through the entry and part of the place. A message was left, 'ANIMAL LIBERATION F.L.A.', making clear the purpose of our actions against the exploitation of animals and the earth. We know that the movement for animal liberation expands throughout Mexico and the world making our struggle a true threat to the speciesist, capitalist, dominating system.

DO NOT FEAR THEM, IT IS THEM WHO FEAR YOU!"

"Whilst the recession goes on and shops slash prices, we decided to do some slashing of our own.

In a number of supermarkets butchers, we slashed the packaging to make the product unsellable.

"The ALF Subversion Squad begun a campaign against various companies in northern england.

Billboards for HLS customer GlaxoSmithKline Lucozade were cut down, made un-readable and painted over with 'GSK Murder Animals @ HLS'.

As the holiday season begins, Manchester Airport have also been doing their own advertisement campaign which we decided to target. 'MIA Import Beagles For Torture' was spraypainted across a dozen.

For the animals killed in HLS we fight on.

"Advertisements for Procter & Gamble products were subvertised to highlight their continued testing on animals.

We chose P & G because of their use of rabbits from Geoffrey Douglas and Highgate Rabbits.