Climate activists have occupied the roof of the Vestas turbine factory at Venture Quays, East Cowes, Isle Of Wight, in solidarity with workers occupying a factory in Newport. The protestors have hung a banner above the Ferry Port saying: “Vestas Workers - Solidarity in Occupation. Save Green Jobs,” and issued the following statement:
This Cowes Week, tens of thousands of people have come to the island to use and celebrate the free, abundant, and natural power of the wind. At the same time, workers at Vestas are struggling to keep Britain's only wind-turbine blade manufacturer open. Factories in East Cowes, Newport and Southampton are being closed with the loss of over 600 jobs, and hundreds more in support industries like Gurit, devastating not only green promises but the Isle of Wight local communities.

Now the people are saying enough is enough. At Newport dozens of workers are in the second week of their factory occupation with messages of support coming in from around the world. These courageous people are showing more vision and commitment to the future of jobs, communities and our planet than all the do-nothing business and political leaders put together.

In the face of man-made climate-change, keeping these workers with their unique specialist skills is as urgent for powering a sustainable future as it is for the for the island communities. But the government which was so quick to nationalise Northern Rock and pour billions into the ailing banks has so far done NOTHING to protect the future of Britain's wind-power generation, despite their recent pledge to invest in “Green Jobs”.

Vestas meanwhile are leaving their workforce high and dry, with peanuts in redundancy pay and little hope of work, while they make off with the £76 million profits they made in the first quarter of 2009 out of their non-unionised workforce.

The Venture Quays roof occupation is in support of Vestas workers demands. We say,

– Take Vestas factories into public ownership, under workers management
Re-instate all workers, including those sacked while in dispute
Invest in developing wind-power in Britain
Retool the Vestas plant to produce for Off-Shore Wind Generation

This dispute comes in a period of crisis, both economic and ecological. The economic crisis has already seen a million people losing their jobs while banks ask for hand-outs, with massive cuts and tax rises on the horizon. On top of that, unless we act quickly, the ecological crisis of climate-change will threaten the very future of human life. Motivated by greed and paralysed by fear, our rulers seem incapable of responding. Instead, the lead is coming from below.

Working people are increasingly standing up and staying put. Occupation by not only workers but local residents is becoming a default option. This year we have seen occupations at the Visteon factories in Enfield and Belfast, schools occupied against closure in Glasgow and Lewisham, a London care-home, Thomas Cook in Dublin and now Vestas. People have been dis-empowered for too long!

Listen to the Vesta workers song “Boys on the Balcony” at 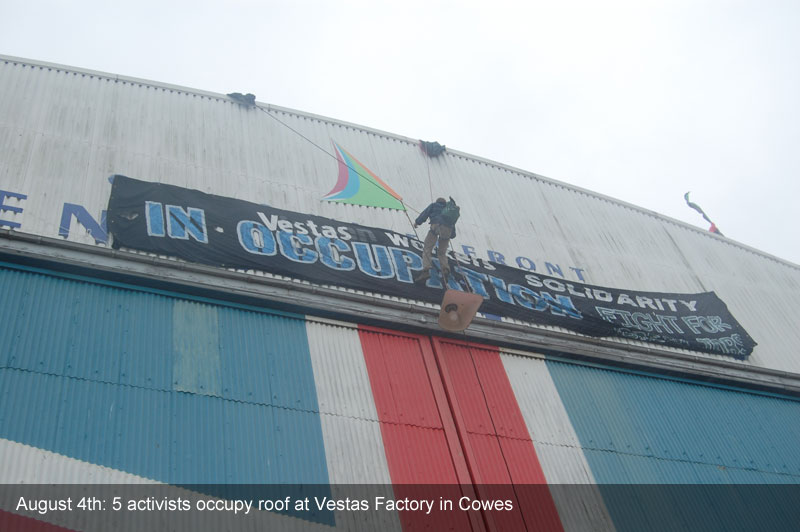 Photo of the occupation