As Peter Tierney of Liverpool BNP was arraigned for smashing an anti-fascists head in with a camera tripod, protesters organised by the magistrates court in opposition to fascist violence. But much more can be done. 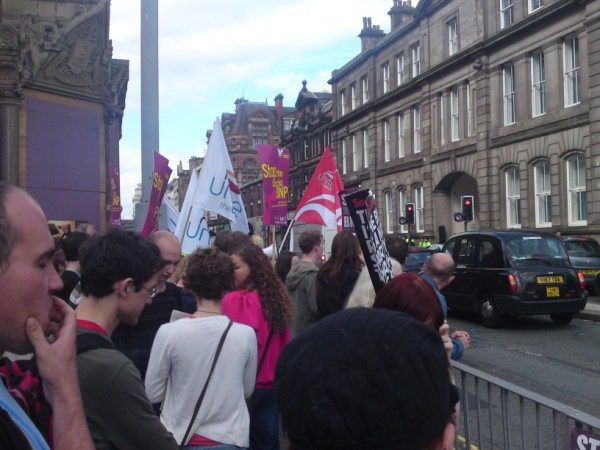 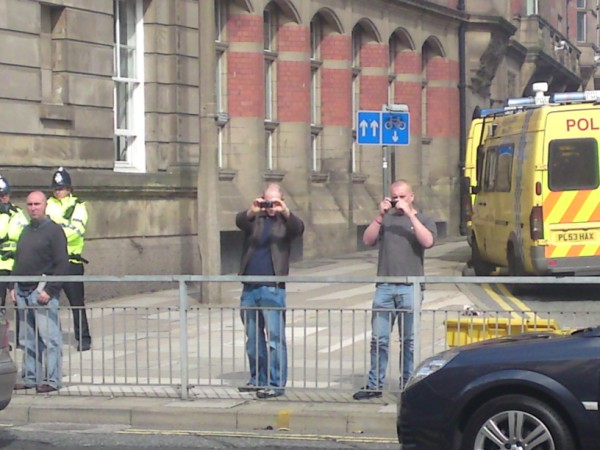 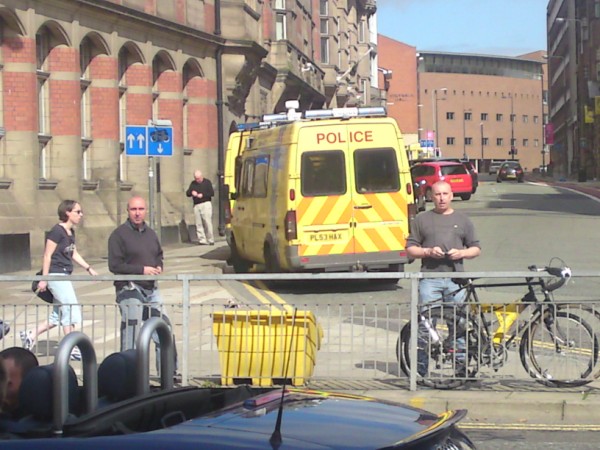 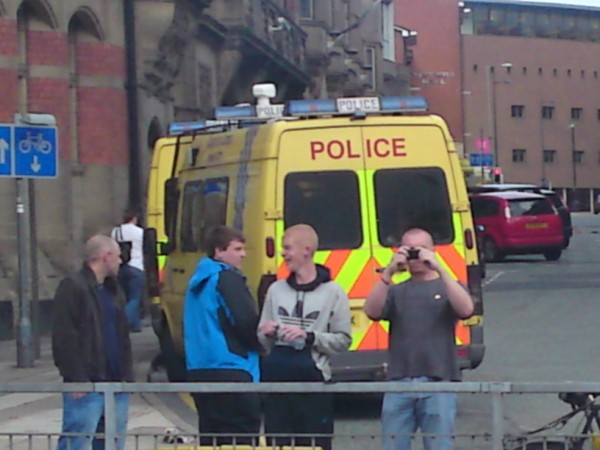 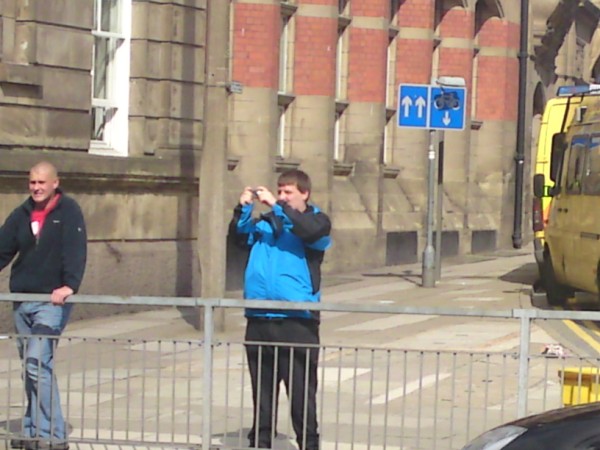 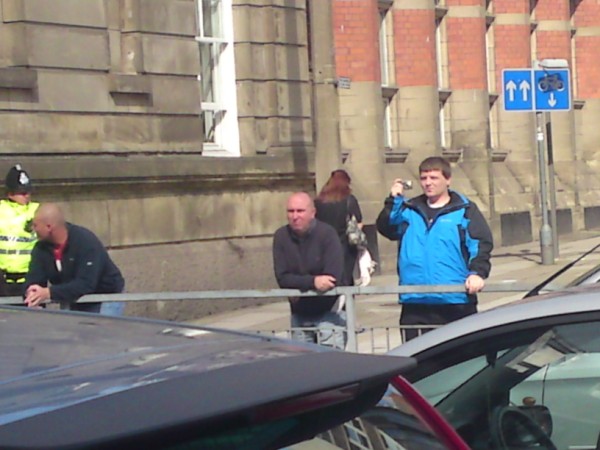 Today, BNP "super-activist" Peter Tierney was arraigned at the Liverpool Magistrates Court on assault charges. On St George's Day, he split open a man's head with a camera tripod during an attack perpetrated by him and Steve Greenhalgh on anti-fascists who had managed to organise opposition to the party's city-centre leafleting on a moment's notice. Despite accusing another anti-fascist of attacking him, Tierney was eventually arrested and charged by Merseyside police.

In response, the BNP claimed that it was in fact they, "including women and elderly folk," who were "suddenly physically attacked" by "a mob of violent Tory and Labour-supported UAF thugs." These "thugs," of course, being local anti-fascists who were not "harassing" Tierney and his fellow fascists but leafleting against them and their lies.

In the run up to the court-date, the BNP mailing list urged armchair fascists to "email or phone the Crown Prosecution service," in an attempt to subvert the course of justice with a flood of crank calls. Merseyside BNP also called on "all democratic, peace loving Nationalists" to show "support" for Tierney by protesting outside the court.

Today, however, after Merseyside antifascists organised an opposition rally to "show the BNP that we won’t tolerate their racism and violence in Liverpool or anywhere else," the story was somewhat different. Around fifty anti-fascists turned up at the Magistrates Court to protest both the fascist gathering and Tierney's violence, but the BNP were nowhere to be seen.

On the other side of the road from the antifascist gathering, however, four known local fascists - believed to be of the British Freedom Fighters (BFF) rather than the BNP - gathered to jeer at the protesters and take pictures. In response, many in the crowd produced their phones to photograph the snoops whilst a chant of "I'm on Redwatch and I don't care" started up. Eventually, the four slipped away to massive jeering, though not before skulking under the nearby motorway bridge to take a few more photographs.

Inside the court, meanwhile, Tierney was decidedly the worse for wear, looking as though he was "off his face on some or other substance" and being unable to remember his own address. His bail conditions, namely a ban from Liverpool city centre, were reimposed, and he will stand trial on August 15th. It is vital that anti-fascists come out to demonstrate their opposition to Tierney's violent thuggery once again.

However, although today's protest served its stated purpose well, I can't help thinking that it could have been better done. Although local Liverpool anti-fascists were the first to call a demonstration, it was Unite Against Fascism (UAF) who quickly dominated the event, with UAF and trade union "leaders" there as speakers. One major problem I have with the UAF and similar organisations is that theirs is an opposition to the extreme right centred on hierarchy and authority, with a lot of neglect as regards grassroots organisation.

In Liverpool we do not simply need a band of people who will come out to hold banners at protests in "safe" areas pre-arranged with the police. What we need is solid, grassroots organisation of activists who will not just come out to shout "scum" at fascists but also mobilise their community, engage with ordinary people, and combat the ideology as much as the physical presence of fascism. We need to be there in great numbers when fascists come out, and to present genuine opposition - not to simply negotiate with police to sell the Socialist Worker in an area of their choosing. Most importantly, we need a movement that is tied into class-struggle, not one that tries to turn people off the BNP by directing them towards a government enacting their worst policies.

Successful anti-fascist movements recognise that real power lies with the people, not with "leaders" and "spokespersons." Moreover, they organise with the aim of taking back the streets from fascists wherever and whenever they may be, and they realise that asking police permission to occupy a small corner for a short time does not even come close to this goal. Tierney and his fellow thugs must be opposed, not by bureaucrats with a permit but by ordinary people with cries of "¡No Parasan!"

Just a quick correction, its Thursday September 3rd that Tierney is up again

Excellent well-written report Phil. I'm sure more militant antifascists will be encouraged by what you have to say about the UAF. It's good to know there is an alternative. Good luck to Liverpool antifascists.

As for Penis88, was he crying his little eyes out again like he was in Blackpool? That boy will get a big shock when he realises that not all antifascists welcome the presence of the cops.

Shall I take my dog to defend me?

"Do you think its wise for me to take my pit with me? I dont want to attract any attention to myself, yet at the same time I want to be able to defend myself when it inevitably kicks off."

""It" won't kick off, it's in the centre of Liverpool, there will be plenty of police"

These posts from the fascist internet Stormfront (as well as their pathetic turnout) show the real strength of Liverpool BNP. As for Penis88, the little shit slunk off back to his computer after 5 minutes apparently..

Any chance of a whip round at the next Antifa gig?

"Inside the court, meanwhile, Tierney was decidedly the worse for wear, looking as though he was "off his face on some or other substance" and being unable to remember his own address. His bail conditions, namely a ban from Liverpool city centre, were reimposed, and he will stand trial on August 15th."

We know that date's wrong so when is it?

anti fascists can be bad too

i once had some anti-fascists nearly attacking me because i had short hair!
What about them? No one stood up for me then.

"i once had some anti-fascists nearly attacking me because i had short hair!
What about them? No one stood up for me then."

Yeah cos we;ve all got mullets!

What a prize muppet!

"i once had some anti-fascists nearly attacking me because i had short hair!
What about them? No one stood up for me then."

NEARLY attacking you? You must walk some mean streets Rex. And all because you had short hair? Wow, that's really believable, I mean terrible. And nobody stood up for you? You should get The Guardian to run it.

Hey, some black kids were rude to me on a bus once.

people with short hair are usually fascists so, even if it did happen it was probably justified
if you choose to look like a fascist then what do you expect to happen?

"people with short hair are usually fascists so, even if it did happen it was probably justified
if you choose to look like a fascist then what do you expect to happen?"

Sigh... time we all went home.

Cheers Liverpool Red for the correction on the date. I don't know why, but for some reason the 15th August was the date in my mind. Obviously been a long day, methinks.

Any one know who the dickhead above in the shitty blue and white coat and bad pudding bowl haircut is?

Love to hear that fat ugly twat trying to convince someone he's the masterrace, what a wanker.

"people with short hair are usually fascists so, even if it did happen it was probably justified
if you choose to look like a fascist then what do you expect to happen?"

Hey I know, lets all bash cancer victims and people with alopecia, they've got no hair, they must be fash.

What about black sufferers of male pattern baldness?

Merseyside BNP member, Peter Tierney, is appearing in court again on September 3rd. He faces charges of assault, following an attack on an anti-fascist protester in April.
Let’s show the BNP that we won’t tolerate their racism and violence in Liverpool or anywhere else. Demonstrate against the racists on September 3rd.

STAND UP TO RACISM AND FASCISM!
JOIN US ON SEPTEMBER 3rd
Liverpool Anti-Fascists: