Israeli general: Israel-Lebanon border could explode at any minute

President Suleiman asked for the full and unconditional implementation of the UN Security Council Resolution 1701, for the preservation of Lebanon’s "right to defend itself and liberate its land by all legitimate and available means”. 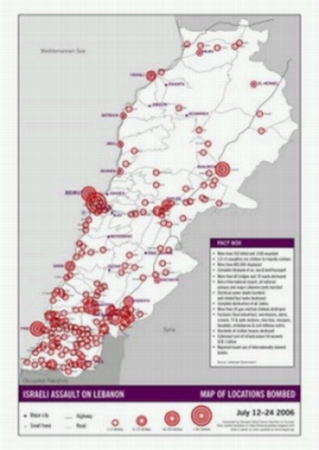 
1) Hezbollah stockpiles 40,000 rockets near Israel border (5 August 2009)
2) Hezbollah rockets part of Iran and Israel’s political game of chess
(5 August 2009)
3) Could Iran be plotting a Hizbollah offensive to take the heat off its leaders?
(4 August 2009)
4) Nasrallah: Israel to strike Lebanon again (26 July 2009)
5) President Suleiman: Lebanon will use ‘all legitimate and available means’
against the Israeli threats (15 July 2009)

by Richard Beeston and Nicholas Blanford, The Times, 5 August 2009


Brigadier-General Alon Friedman, the deputy head of the Israeli Northern Command, told The Times from his headquarters overlooking the Israeli-Lebanese border that the peace of the past three years could “explode at any minute”.


Israel has the political will and the military muscle to execute an attack against Iran’s nuclear facilities. The range may be beyond anything attempted by the Israeli Air Force, but Iran’s conventional forces are outdated and defences weak.

It is assumed that Arab states, whose airspace Israeli bombers and fighters would have to fly through to reach Iran, would secretly cooperate on a mission to blunt the Persian threat.

That is why Tehran is investing so heavily in its Lebanese proxy Hezbollah. The Shia Muslim militia has rebuilt and strengthened its arsenal since the bloody war it fought with the Israelis in 2006. It has amassed tens of thousands of rockets and missiles capable of bombarding half the country.

Israeli planners have no doubt that should they make the fateful decision to attack Iran, they will provoke massive retaliation on an unprecedented scale. The most densely populated areas of the country would come under Hezbollah range, including Tel Aviv, Haifa and Ben Gurion, Israel’s only international airport.


Could Iran be plotting a Hizbollah offensive to take the heat off its leaders?


Hezbollah leader Seyyed Hassan Nasrallah has said that the Israeli regime may launch another attack on Lebanon by the next spring.

In a meeting with Lebanese expatriates visiting the country, Nasrallah estimated that Israel would not remain inactive, but rather, initiate an aggression on the country “sometime between the end of this year and next spring”, Lebanese television channel al-Jadid reported on Saturday.

The prominent leader added that should Israel wage another war on his homeland, the Hezbollah movement would use new tactics and methods to repel the assault. He stressed that this time the group would not hesitate to attack Tel Aviv, if the southern suburbs of Beirut were hit.


excerpt from: Lebanon will use ‘all means’ against Israel


Speaking at the opening session of a Non-Aligned Movement (NAM) summit on Wednesday, [Lebanese President Michel] Suleiman reiterated that Lebanon has the right to defend itself against Israeli the threats and to liberate its lands occupied by Israel.

“Lebanon presented this summit with specific demands for the full and unconditional implementation of Resolution 1701, for the rejection of any form of Palestinian naturalization and for the preservation of (Lebanon’s) right to defend itself and liberate its land by all legitimate and available means,” he said.


The reason the rationale for invading Gaza keeps changing, (from rocket-fire to Hamas infrastructure to strengthening deterrents to weapons smuggling to ceasefire violations etc) is because the Israeli leadership wants to conceal the true objective. The purpose of “Operation Cast Lead” is to conduct a dress rehearsal for another invasion of Lebanon.

That’s the real goal. Israel has never recovered from its defeat at the hands of Hezbollah during the 33 Day war in 2006, so it is planning to restart hostilities. The attack on Gaza is just a “dry run” to strengthen morale and put the finishing touches on the battle plan. That’s why there’s such a disparity between the implicit risks of the current operation and its minuscule strategic gains.

It’s not really Hamas in the cross-hairs, but Hezbollah; and this time, Israel hopes to crush them with overwhelming force. The massive week-long aerial bombardment of Gaza; the pounding by heavy artillery units, and the deployment of elite troops and armored divisions, all presage a massive Normandy-type invasion of Lebanon with the probability of high casualties.


Preparing for a possible confrontation with Hizbullah


“In the last war, we made a distinction between Hizbullah targets and Lebanese national targets […] Now that Hizbullah is in the government – with veto power in the cabinet – there is no longer a reason to make this distinction, since a Hizbullah attack against Israel is essentially a Lebanese attack against Israel. […] No village will be immune […] We will give them about a 12-hour warning, and then strike back” [a senior Israeli army general told the Jerusalem Post].

To prepare for another possible war with Hizbullah, the IDF has also drawn up operational plans that it believes will succeed in ending the battle – with a clear and decisive victory – in four or five days, not like last time. […]

In general terms, the plan consists of two stages. The first: to strike hard at Hizbullah infrastructure from the air, and to hope that this is devastating enough to force Hizbullah to end the war […] The second: to conduct a massive ground attack, probably up to the Litani River, […]


CSIS report: Turkey would be the optimum route for a possible Israeli attack on Iran (16 March 2009)