Around 200 people met in London at Thursday lunchtime, 6th August to remember the anniversary of the first use of atomic bombs. Similar ceremonies were also held in other cities around the world. Photo Copyright (C) 2009 Peter Marshall, all rights reserved. 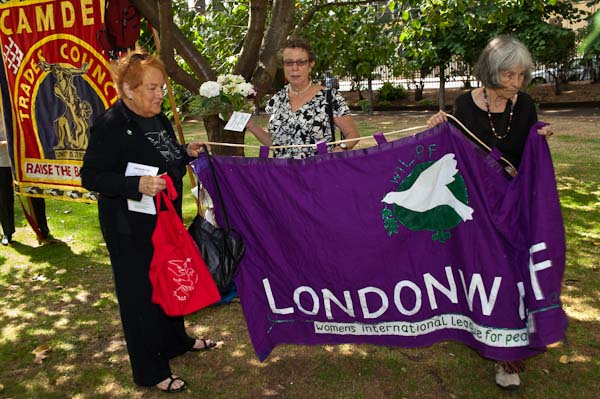 Some of the banners 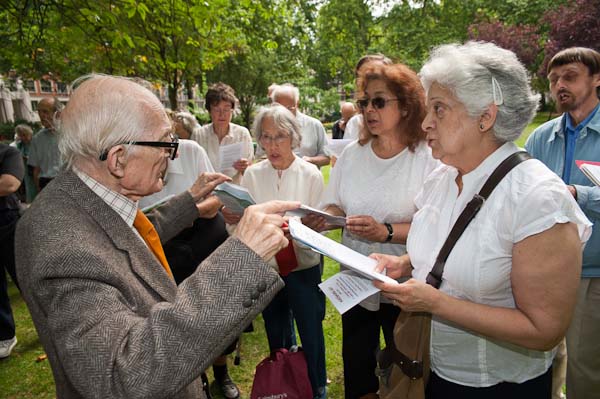 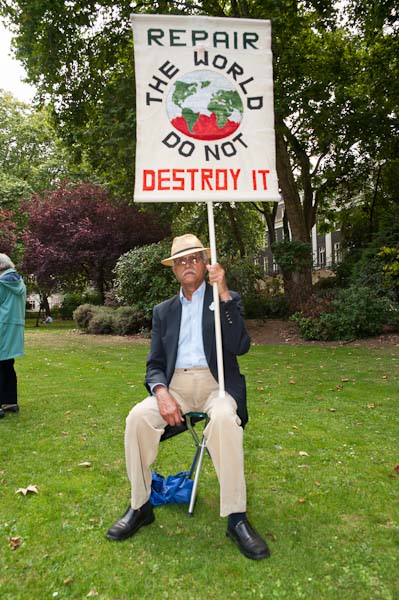 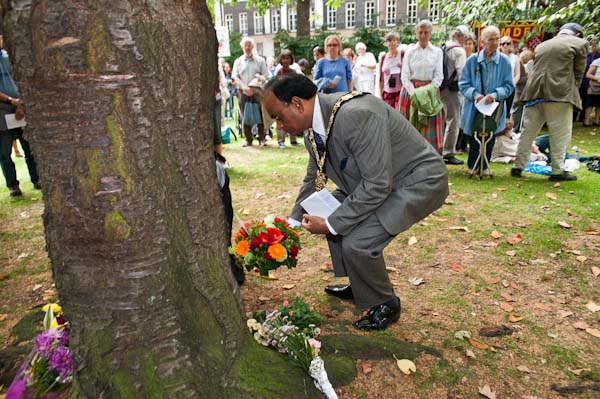 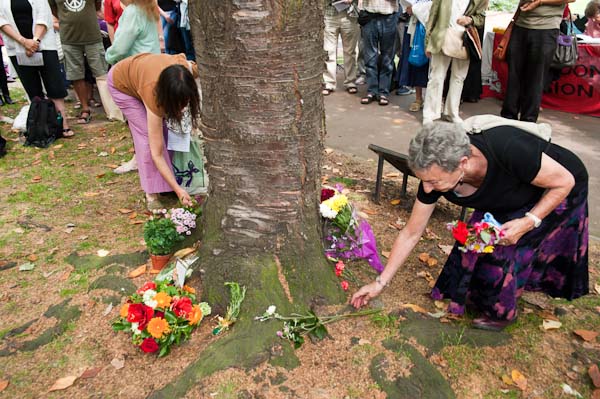 More flowers under the cherry tree

Sixty-three years ago, at 8.15 am on August 6, 1946, the USAF B-29 Enola Gay dropped the first atomic weapon to be used in war, code-named "Little Boy” on the Japanese town of Hiroshima. It took almost a minute to fall from over 30,000 feet to a height of 2000 ft where it was detonated. Around 75,0000 people - almost one in three of the population of the city - were killed immediately and roughly the same number were seriously injured. Two days later, on 8 August, a second atomic bomb was dropped on Nagasaki, resulting in at least 40,000 being killed immediately and possibly twice as many dying by the end of the year. Many more in both cities suffered from the effects of radiation and died later.

The London Memorial Ceremony, organised by London CND, took place in Tavistock Square, next to the cherry tree planted there by the Mayor of Camden in 1967 to remember the victims of Hiroshima. The current Mayor of Camden, Cllr Faruque Ansari was the first speaker, after a brief introduction by Islington MP Jeremy Corbyn and a peace song by the Workers Music Association, and he was followed by the Frank Dobson MP and Bruce Kent, Vice President of CND.

Speakers called for Britain to abandon our Trident missiles and not to waste billions on their replacement. South Africa is the only country yet to renounce nuclear weapons and we could lessen the risks of a future nuclear conflict by giving up our expensive and obsolete systems.

A second socialist choir, Raised Voices also performed, and were followed by Pat Allen of Highbury and Islington CND talking on the early days of CND and Ann Garrett of Bromley CND reading three of her poems. It was a surprise to also hear a 14-year-old girl, Sonia Azad speak so confidently. I had met her a few months earlier when I was photographing and she was videoing CND's 'Wedding 'Die-In' Against Afghanistan War' at the British military HQ at Northwood in May.

The two socialist choirs then joined together for a further anti-bomb song, 'Against the Atomic Bomb' which puts words by Ewan McColl to a Japanese melody.

Lindsey German, convenor of Stop the War gave a typically forthright performance and reminded us of the need to keep demonstrating against the war in Afghanistan - particularly in the demonstration planned for 24 October. Len Aldis talked about the success of the 'Mayors for Peace' campaign but urged all of us to get our Mayors to join if they have not already done so, and Silvia Swinden talked about the World March for Peace and Nonviolence, which starts on 2 Oct 2009.

Those present were then invited to lay flowers beneath the Hiroshima cherry tree during a minute's silence to remember the victims of Hiroshima and Nagasaki, after which choirs and all those present joined in singing "Don't you hear the H Bomb's Thunder." I had to rush away at this point to another event, but people were invited to stay for a picnic in the park after the ceremony.

This story is also on Demotix.

http://www.demotix.com/news/london-remembers-hiroshima-victims
More pictures on My London Diary next week.