Demonstrators from 'DISARM DSEi' picketed the offices of Clarion Events in Hatton Garden, London on Thursday lunch time, calling for an end to the Defence Systems & Equipment international (DSEi), the world's largest arms fair, which Clarion are organising at ExCeL in East London next month. Photos Copyright (C) 2009, Peter Marshall, all rights reserved. 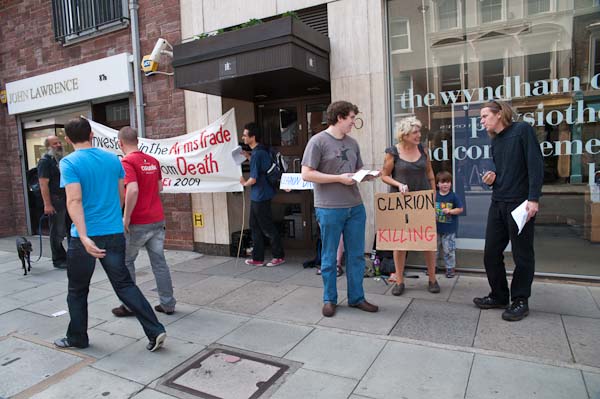 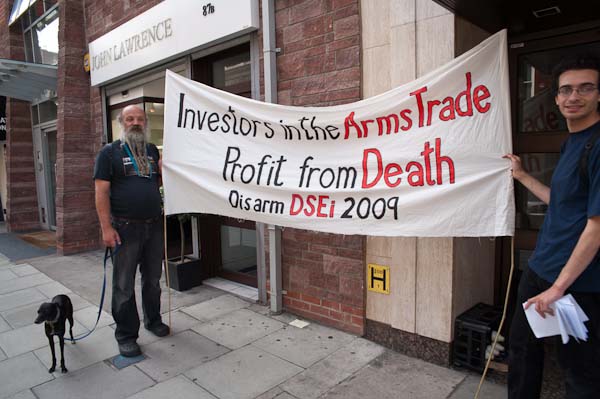 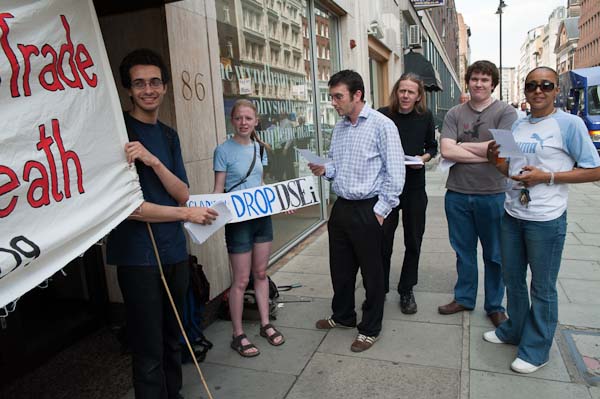 Two people read leaflets and talk to the protesters 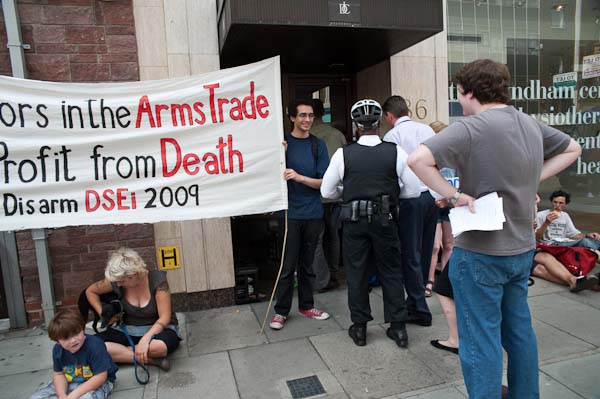 An man gets a police escort into Clarion's offices 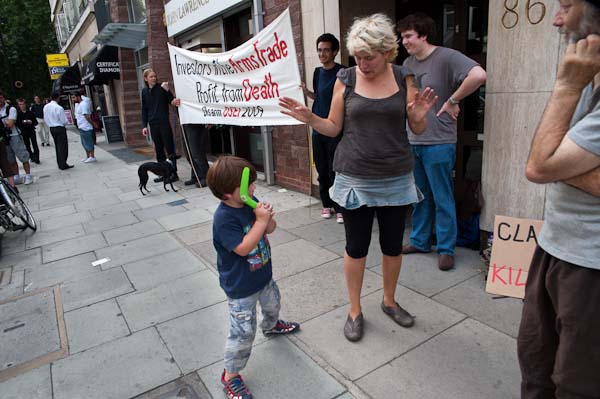 The most dangerous weapon the protesters had

DSEi is a vast event - in 2007 there were over 1300 companies from 40 countries exhibiting weapons and related equipment and a total of over 26,000 visitors to the show.

The arms trade results in millions of men, women and children being killed in conflicts around the world. According to UNICEF, in the ten years between 1986 and 86, two million children were killed in armed conflict and a further six million injure, many permanently disabled.

British companies are among those making high profits from equipment designed to kill people, and our High Street banks invest huge amounts in arms companies.

Demonstrators handed out leaflets to the many passing by, explaining what went on the in the anonymous office building. Many of them were surprised to find that our government encouraged such activities, and some stopped to talk with the pickets. The youngest member of the group provided some entertainment running around with a small plastic boomerang, fortunately hardly a dangerous weapon and unlikely to be found at arms fairs. At one point he staged a short 'die-in', blocking the entrance to the offices by lying on the floor in front of the door, but otherwise the demonstration was restrained and entirely peaceful.

Police watched from across the road, one making copious notes and apparently taking a great deal of interest in the four press photographers present, who were mainly just standing around talking to each other as there wasn't a great deal to photograph. There were also two officers, one armed with what a colleague identified as a GLOCK semi-automatic pistol on hand a few yards down the street, although it was hard to see any need for this - the demonstrators are after all opposed to the arms trade. This was an event with no possible terrorist threat or threat to public order, and it looked very much a case of boys and toys, Only a few years ago we prided ourselves that our police were not armed; now they seem to want guns even to help old ladies across the road . The only active duty they took during the protest was to escort one - or possibly two - men into the offices, who would otherwise have walked through the picket without being noticed.

The protesters rolled up their banner and left as arranged after an hour, with a police car following them at walking pace along the street and along High Holborn as they went towards a pub.

and more on My London Diary next week