Letter from a Greek prison

Thodoris Iliopoulos is a prisoner of the Greek state. Here’s a new letter by him written whilst in the Korydalos prison. 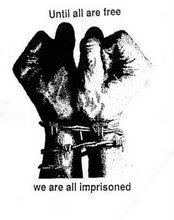 On the day I learnt that they’d extend my ‘temporary’ imprisonment by six months I took the decision to begin my hunger strike; to fight by the only means I still have, my own body.

After twenty-seven days my body, now ten kilogrammes lighter, is on its way to freedom or the final death, depending on what the scandalous people of the State decide, the ones who covered-up the SIEMENS and Vatopedi scandals, those who freed Pandeleimonas who stole a treasure, and accept no responsibility for the attacks against migrants or the murders of workers. The same State that whoever expresses to it their opinion and demand from it equality, justice, and a better future—the future of our children—is being labelled an ‘enemy of democracy’ and has their human rights violated.

I’m one of those tens of thousands of people with an active consciousness, and not an armchair [passive citizen]. And I don’t cover my face.

From the Augustine rastoni of the system

From: Thodoris Iliopoulos
To: Prison headquarters

I inform you that from now I’ll not accept any new medical examinations by the [prison’s] doctor, since my daily visits to the doctor’s office are mainly a nuisance and cannot predict anything about my health.

I request to be moved into a hospital.

Imprisoned in Wing A and hunger striker since 10 July [2009]