Major student organisations in US and UK unite in protest over
clothing company's human rights violations in Honduras, as university boycott
becomes the 'biggest ever'. 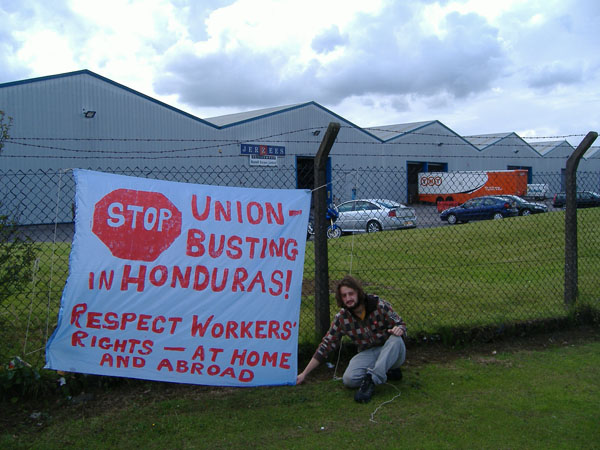 As the number of universities who have cut all contracts with Fruit of
the Loom or their subsidiary Russell nears 100, students in the US and
the UK have held their first-ever "Transatlantic Day of Action"
targeting sweatshop abuses by the company owned by billionaire
investor Warren Buffett. They showed the magnitude of support for the
boycott with a flood of phone calls, emails and colourful protests at
company locations. The protests were in response to the closure of a factory after union was formed. A supervisor said 'The workers will starve
because they got involved in a union', according to independent reports.

Students from People & Planet and United Students Against Sweatshops are targeting Russell Corporation and its parent company, Fruit of
the Loom, over high-profile worker rights violations at the company's
factories in Honduras, where Russell is the country's largest private
employer. Nearly 100 universities are already boycotting the company, in
the largest universities boycott in history: USAS has pushed 91 US
universities to sever ties, including the Universities of California,
Duke and Georgetown; and the Universities of York, Edinburgh, Birmingham
and Birmingham City University have boycotted in the UK.

'This is the biggest university boycott ever, and the fastest growing.
It is showing no signs of stopping so the company needs to act quickly as it is costing the company tens of millions of pounds. Whilst union leaders are getting imprisoned and attacked after the recent military coup in Honduras, they do not need a major brand like Fruit of the Loom taking away their human rights too'

In the last two years, Russell fired nearly 2,000 employees from two
separate factories simply because the employees spoke out against
sweatshop conditions including unsanitary drinking water, wages too low
to feed a family and verbal abuse. All of these actions violate
universities' codes of conduct for clothing suppliers, and Russell has
failed to remedy the violations, over eight months after universities
raised concerns. The Workers Rights Consortium, an independent factory
monitoring group, has reported extensively on Russell violations in
Honduras.