Report and photos of SPSC delegation to Palestine August 2009

A 2,000 word report with photos of the SPSC delegation to Palestine 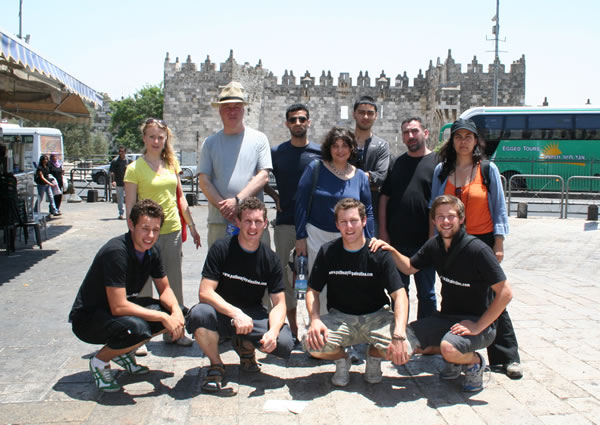 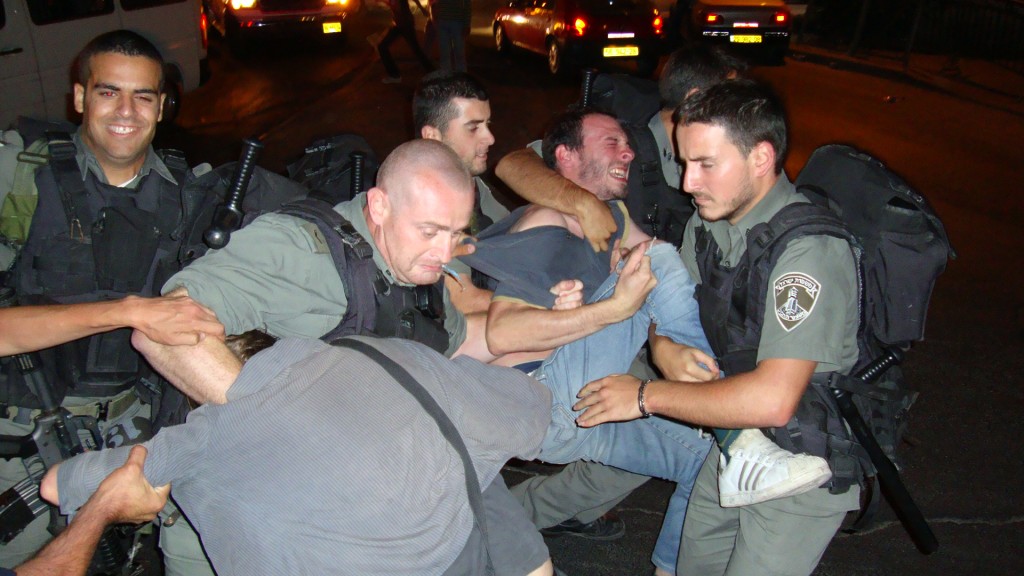 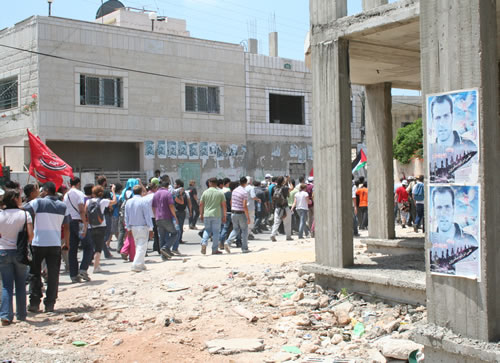 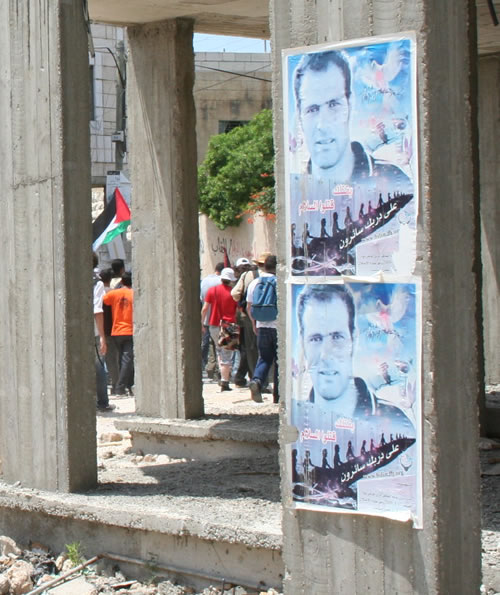 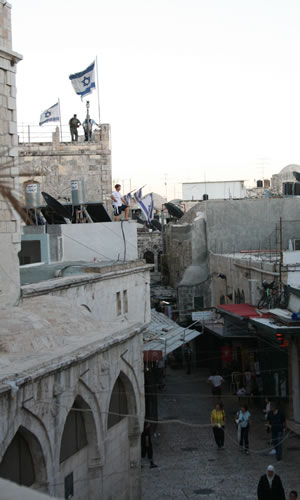 Getting successfully through Ben Gurion Airport

The first part of the SPSC Delegation is now in Jerusalem, preparing the itinerary for the others who will be arriving in the next few days to meet, listen to, and discuss with Palestinian civil society and political groups.
Getting into Palestine usually means going through Tel Aviv’s hideous Ben Gurion airport. And that means getting into the prison that is Palestine without alerting the Israeli jailers. There is always a chance they will suspect at Ben Gurion that you intend to visit some of their millions of prisoners.

Any hint that you are there to meet with Palestinians – and in the absence of diplomatic protection – will usually result in your being denied entry, detained and sent back on the next flight out.

As happened recently to B**** A**** from Glasgow. In 2006, as another example, a group of nine women from Birmingham, including a local MP, were turned back when they went to further links between citizens in Birmingham and Ramallah and did not conceal the fact. It happens all the time.

The Delegation will be working to extend and deepen solidarity links between Palestine and Scotland over the coming year.

Saturday morning and another 3 members of our delegation have arrived and are catching up on some sleep back in the hostel. Two were delayed in getting through Tel Aviv airport – being young Muslim men they were well prepared for the racist profiling by Israeli airport security.
I’m sitting in the garden of the Austrian Hospice, al Quds (Jerusalem), Old City, in the heart of the Muslim Quarter. The streets below are busy with shoppers and tourists browsing the sweet shops and grocery stores. On both sides of this section of the old city buildings occupied by settlers display Israeli flags, each building with CCTV cameras pointing down to the street below.
One building, now occupied by families belonging to settler organisation Ateret Cohanim, was bought by Ariel Sharon to assert Jewish sovereignty over all of the Old City. The balcony and rooftop of the other building is decorated with large Israeli flags and the occasional armed soldier or settler.

Supremacy in all of the Old City


“Bad smell” water is back at Bil’in demo

Below is a report of the demonstration at Bi’lin yesterday. Dougie, a member of the SPSC delegation, was amongst those hit by the sewage water now regularly used by Israeli Occupation Forces at the weekly demonstration organised by the Bi’lin community and supported by Internationals as well as Israelis.
Read the report:

The death of Bassem Abu Rahme or How Israel kills at will and in total impunity while the world asks the Palestinians for non-violent resistance.

On April the 17th, like any Fridays afternoon for the last 4 years, the small village of Bil’in, north of Ramallah, was preparing for the usual demonstration against Israel’s annexation wall (some people call it apartheid wall or separation wall. The Israeli government refers to it as the security fence).
read full article

After less than 24 hours of their Scottish delegation to the Occupied Palestinian Territories seven Scots from Edinburgh and Glasgow heard first-hand how Israeli police and soldiers forced their way into the homes of the Hanoun and al-Ghawi families, beating children, one son had his leg broken. The furniture and family possessions were loaded into trucks and Israeli police are demanding payment in order for them to be returned.

These actions by the Israeli state authorities were carried out in order to make way for Jewish Israeli settlers who under police protection moved into the Palestinian families homes within the hour. Eleven internationals, many from the International Solidarity Movement, who have been living in solidarity with the Palestinian families, were arrested during the eviction.

The Israeli Alternative Information Centre reports that “the Hanoun and al-Ghawi families have been battling the Israeli legal system at every level since 1972 for the right to remain in their homes, which originally were provided to them by UNRWA. The families are all registered refugees, having initially fled from Mandate Palestine, including West Jerusalem, in 1948, leaving behind their land and other property. The Israeli courts have repeatedly ruled in favour of groups of settlers laying claim to land and property in occupied East Jerusalem, often on questionable grounds, at the same time as Palestinian refugees are unable to regain possession of property left behind in 1948.”

Sofiah MacLeod of Scottish Palestine Solidarity Campaign, reporting from the site of the eviction, said “there has been a lot made about Obama’s push against settlement expansion by Israel but the evictions, beating and violations of human rights take place every day. The settlement building and displacement of Palestinian families can only continue because Obama and the EU continue to turn a blind eye and take no action to protect Palestinians.”

The seven Scots will be meeting Palestinian and Israeli activists struggling against Israeli occupation and aggression. They will be reporting back from their visit in September.

Two SPSC members, Dougie Laing and Alasdair Smith, had a narrow escape tonight (Sunday) when along with other members of the international community they witnessed the removal of Palestinian families from the homes they have occupied for fifty years to be replaced by recently arrived Jewish immigrants from Eastern Europe. Dougie and Alasdair were observing the protest from the pavement outside the Palestinian family’s home in the Sheikh Jarrah district of Jerusalem.

The demonstration by young protestors from around the world and from Israel itself was friendly with chanting and joking amongst the teenagers and friendly banter directed towards the Israeli military. However, the atmosphere took a more sinister turn when it appeared the protesters were settling in for a long night. The soldiers seemed to act very strangely with some of them appeared to stare in a glazed manner. One protester said he had seen the soldiers drinking from bottles and certainly when their actions turned ugly they appeared to be under the influence of some substance or other, a suspicion confirmed by a number of witnesses.
Attempting to catch the young protesters of guard, the soldiers told them in Hebrew they had five minutes to clear the pavement upon which they immediately attacked the boys and girls. Working in a coordinated manner they lashed out with their truncheons forcing them to the ground where there heads were compressed onto the tarmac. Despite their protests and screams the soldiers continued their attack dragging many of them to nearby police vans. I appealed to the officer in charge to treat the protesters in a humane manner but he was oblivious to any appeal to reason and continued to encourage his men forward.

Dougie and I were shocked by the soldier’s reaction to a peaceful demonstration against an inhumane action of rendering 14 children and their parents homeless. Despite this we managed to photograph the scenes and we have included some of them in this blog. included

Posted in Uncategorized | No Comments »

Went down to the demo at Sheikh Jarah. There was a crowd made up of about 200 Palestinian, Israeli and International protesters in solidarity at the eviction of two Palestinian families this morning. After a few hours of peaceful protest, a carful of young settlers repeatledy circled the area teasing the protesters. Events culminated with several Palestinian Youths, no older than 8, entertained the crowd with anti Israeli slogans. This was more than the soldiers could bare and they moved in e en masse to arrest several internationals. Dougie
Posted in Uncategorized | 1 Comment

Scottish PSC delegation members met with a group ‘Pathways to Palestine’ who are cycling from Glasgow to Gaza. Their visa to Gaza has already been rejected by the Israeli authorities.


Economics of the Occupation

The past few days have been extraordinary and deeply saddening. From visiting the site of the inhumane eviction of a Palestinian family from their home in Sheikh Jarra, witnessing the ethnic segregation and the affect of settlements to learning about the economics of the occupation.

Despite this, being informed about the effects of the boycott and its very real threat to Israel has left us with a sense of purpose and feeling re-energised. In particular, spending time with Mazin seeing his strength in character and his positive attitude has given our group belief. A professor at Bethlehem and Birzeit University, his house overlooks a fortified illegal settlement across the apartheid wall. He still sees hope and encourages us to even with the constant reminder that we can see from his window. Taimur.

Today we’ve visited two organisations that examine and try to draw attention to Israel’s catalogue of international law violations. There were lots of questions on everyone’s lips – why is nothing being done when these violations are so well documented? Why does international law and human rights not mean anything to Israel? How long will Israel remain unaccountable? And how many more Palestinians will have there human rights trodden on?

The legal root doesn’t seem to be enough – there has to be pressure coming from us. Pressure on our own governments and companies to stop compiling with these crimes.

The UK has only imposed a partial arms embargo on Israel. And despite documented cases of torture, unlawful imprisonment of children amongst others the UK still sells arms to Israel.

We’ve also heard lots of examples of where pressure does work. As an occupying force it is illegal to transfer civilian population into occupied areas but that is exactly what Israel does. The settlements are illegal under international law. Because of boycott action in Europe the company building the tram network to these illegal settlements have made it clear they want to pull out – success! Jerusalem looks worse than Edinburgh …..trams half finished!!! R

Posted in Uncategorized | No Comments »

Another day another tale of apartheid Israel’s inhuman treatment of the longsuffering Palestinians.

We travelled to the wonderful campus of Bir Zeit University where we met with a representative of the “Right to Education Campaign.” Unfortunately he was considerably late as the Israeli occupation forces harassment of the people going about their business meant he could not make his appointment on time. This really brought home to us the extent to which the forces of the racist regime work to make life difficult for students and the Palestinian population as a whole. Out of a roll of 8000 students the state security apparatus has incarcerated 83 students on administrative detention whereby they are not told what they are accused of and they are held for an indefinite period of time which can range from months to years. Similarly, university professors at the university are detained on spurious charges which disrupt lectures and the delivery of the curriculum with the result that whole courses have to be cancelled. The aim of such actions is to harass the most educated elements of Palestinian society and to prevent the creation of an effective opposition to the occupying forces.

What we took from today’s meeting was the resourcefulness and the determination of the Palestinian people not to be downtrodden and the fantastic campus of BirZeit is a testimony to this.
Posted in Uncategorized | No Comments »