Photographers to “Flash-Mob” Canary Wharf – as new campaign is launched.

A new campaign for photographers’ rights launched this weekend – with more than two hundred leading photographers showing their support for the PhotographerNotaTerrorist.org website by holding up a placard saying “I’m a Photographer, Not a Terrorist!” – will help all photographers to understand and uphold their legal right to take photographs. 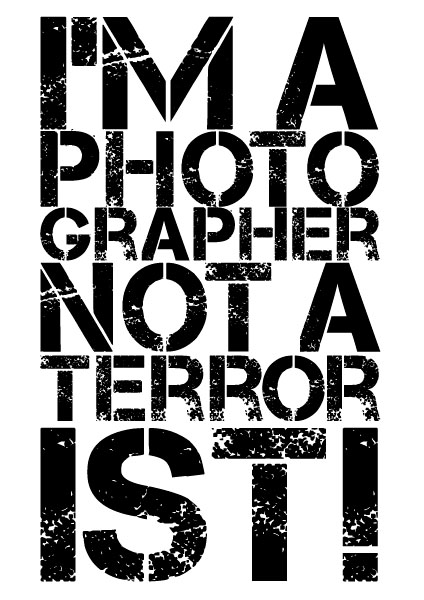 The campaign will fight for photographers’ rights across the country, opposing police repression and the abuse of anti-terrorism legislation. It will challenge the unreasonable restrictions in pseudo-public spaces such as shopping centres and Canary Wharf.

Anti-Terror Map: The website will map the use across the country of anti-terrorism legislation which can impose prison sentences for simply photographing a police officer and whose wide-ranging draconian powers allow police to stop and search anyone even where there is no reasonable suspicion of terrorism at all.

Stop & Search Bust Card: Also featured on the site will be a ‘bust card’ for photographers – that will set out their legal right to take photographs when stopped by police or security staff.

Canary Wharf ‘Flash-mob’: The campaign calls for a National Photographers Flash-Mob of Canary Wharf on 12th September 2009 and is calling for photographers across the country to highlight spaces where photography is unreasonably restricted. The flash-mob action will highlight how heavy handed private security guards are restricting individual liberty and press freedom by preventing photographers from pursuing their hobby or their profession.

The London flash-mob will be 3pm at the Clocks, Canary Wharf, London.

“I’m a Photographer, Not a Terrorist!”