Correlation Between Abuse of Women and Abuse of Animals

In Australia, Japan, Spain and elsewhere, oppression of women
is correlated to violence toward animals

It is men who torture bulls in rings in blood sports reminiscent
of ancient gladiator contests.
It is men who are the vast majority of hunters and fishermen.
Men are the sealclubbers. 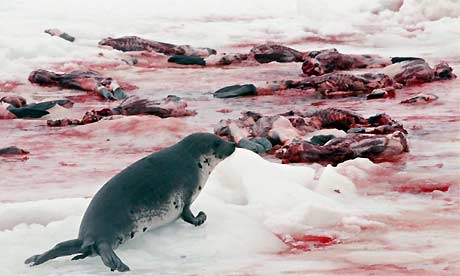 Among 12 surveyed countries Australians make
the worst husbands. NPR reported that Japanese
are the 2nd worst.

http://www.guardian.co.uk/world/2005...6/spain.gender
There have been virtually no Latino country leaders.
The macho culture of Latino countries is expressed
in bullfights in which male matadors delight the crowd
with brutal bull murders.


Constantina Salamone, founder of World Women For
Animal Rights:
In the dairy industry, all the captive animals
are women.

Many women who organize against rape think
nothing of stealing the milk and eggs of women
animals.

Norwegian law requires that 40% of all corporate boards
be women.

May the women end quickly the murder of whales
and seals by Norwegian fishermen.


Mary Robinson is the first woman president of Ireland

It was not until during and just after the World War I that the first few women became members of the revolutionary governments in Ukraine, Russia, Hungary and Ireland. Nina Bang, Danish Minister of Education 1924-26, was the first woman to be minister in democratically elected parliamentary government.

Henhawks
Angela Merkel, the Alzheimer's sufferer
Margaret Thatcher, and Hillary Clinton have given
the women's movement a bad name, while
in the US, the National Organization of Women
has been coopted by war promoters.