Campers at Climate Camp Cymru near Merthyr Tydfil have upped the ante and have set off to enter Ffos-y-fran open cast coal mine, just yards from the camp. 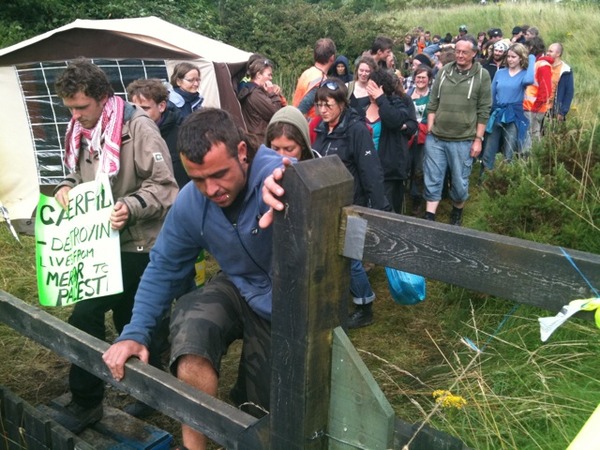 “We have been talking to local people at the camp, in the town and on the housing estates. The story is the same everywhere — people feel abandoned and used. Their hillside is being ripped apart, a massive incinerator is proposed and a third phase of this monstrous coal mine is now on the horizon, with plans to destroy the peaceful wooded hillside opposite.

“This action wasn’t planned at the start of the camp, but we feel it is important to show our opposition to the mine with a ‘climate stroll’ to symbolically reclaim the land for the community

“We have been hearing about people with respiratory conditions such as asthma which have started or worsened since the mine opened, people unable to put their washing out because it gets black, vegetables coated in filthy dust.”

Wales could soon be self-sufficient in clean energy but is still generating fossil fuels for England. The coal from Ffos y Fran will generate the same amount of CO2 per year as Mozambique. We have to stop climate change, not make it worse. Coal is nearly all carbon and must be left in the ground.

“Reclaiming the land is a symbolic act. Coming here has been a real lesson for us, and we feel privileged to be part of the resistance to this mine. We have had talks from scientists and ecologists, but the most memorable lessons came from the local residents.

History has shown that changes can be made by ordinary people doing extraordinary things. The suffragettes and the civil rights movement took action that was often illegal but very necessary. As our politicians fail us, we need deeds and not words.”

Between now and the Copenhagen climate summit in December, activists will take decentralised or collective action in Wales against the root causes of climate change.