Nike has bought development rights to the Miyashita Park, Sibuya, central Tokyo. With it they plan to make it a commercial project rather than a public space that has been used for all sorts of actvities. For example any kind of art has always been guareented to be exhibited there whatever the political connotation. The public lose the rights on 30/31st of August of which they will hold a 2 day event. Some of the homeless are also fighting as parks are the only place they can squat. More homeless are envitable with the global financial crisis and by law the only places they can not be removed are public parks. At the bottom is the translated callout. 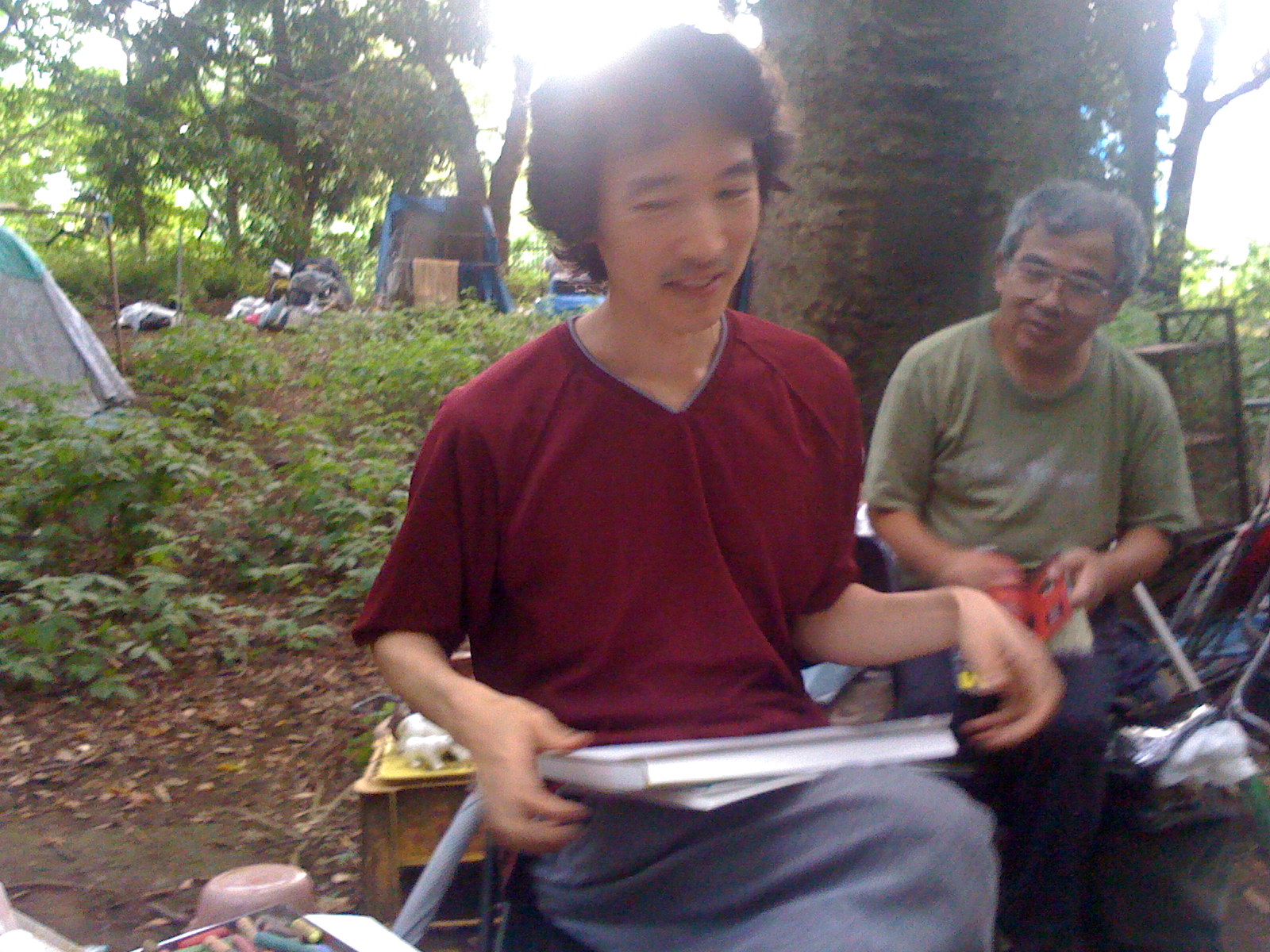 Art-class of ENOARU cafe in "tent city" of Yoyogi Park 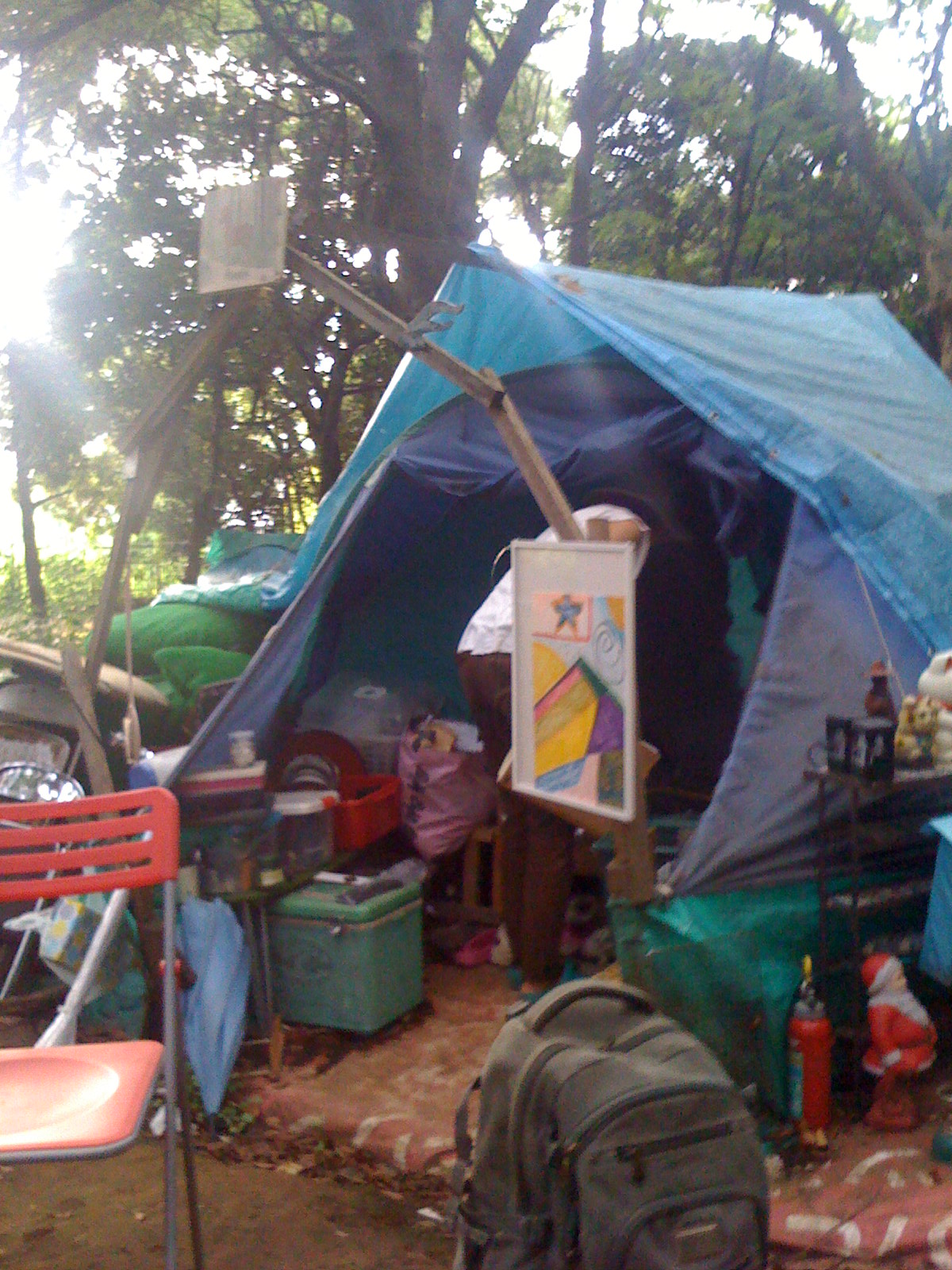 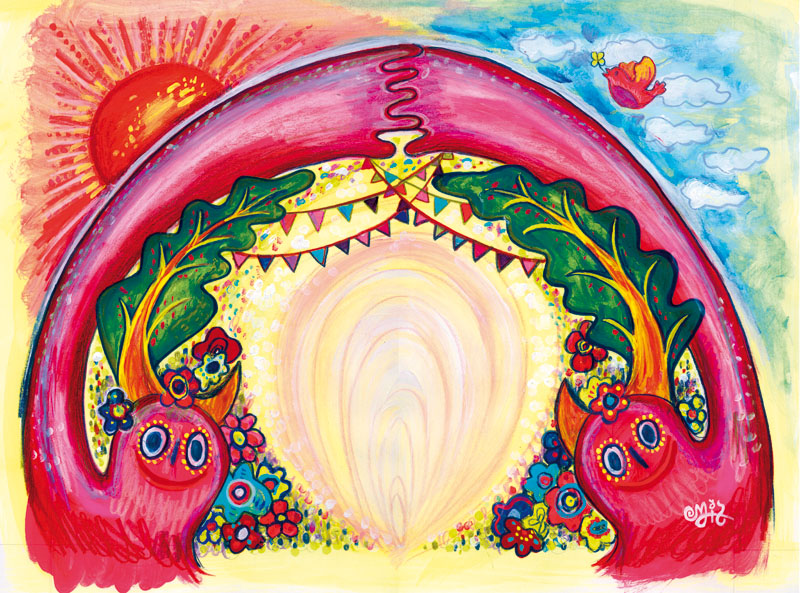 A piece of art by one of the organisers 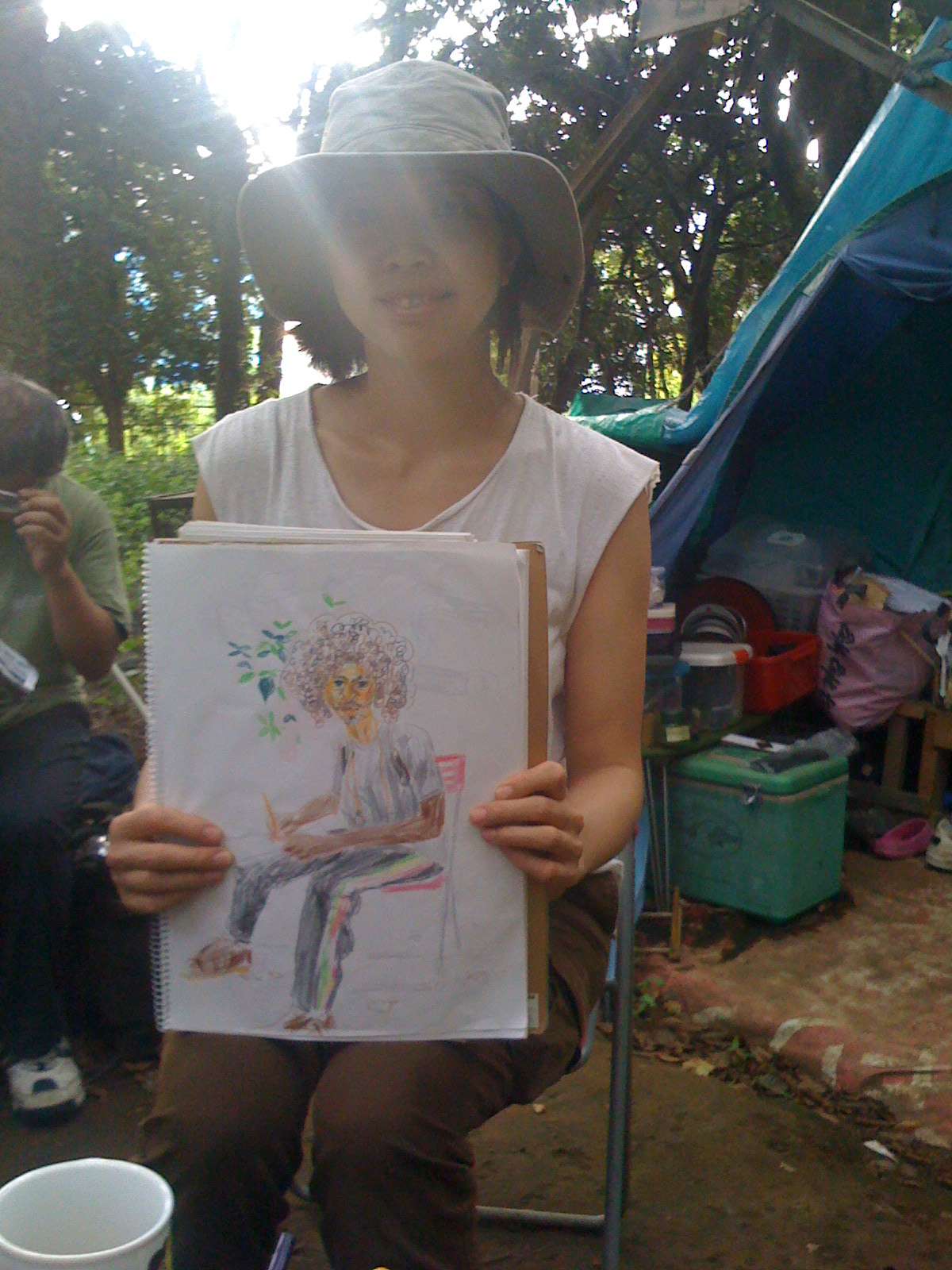 Misako gave me the honour of drawing me 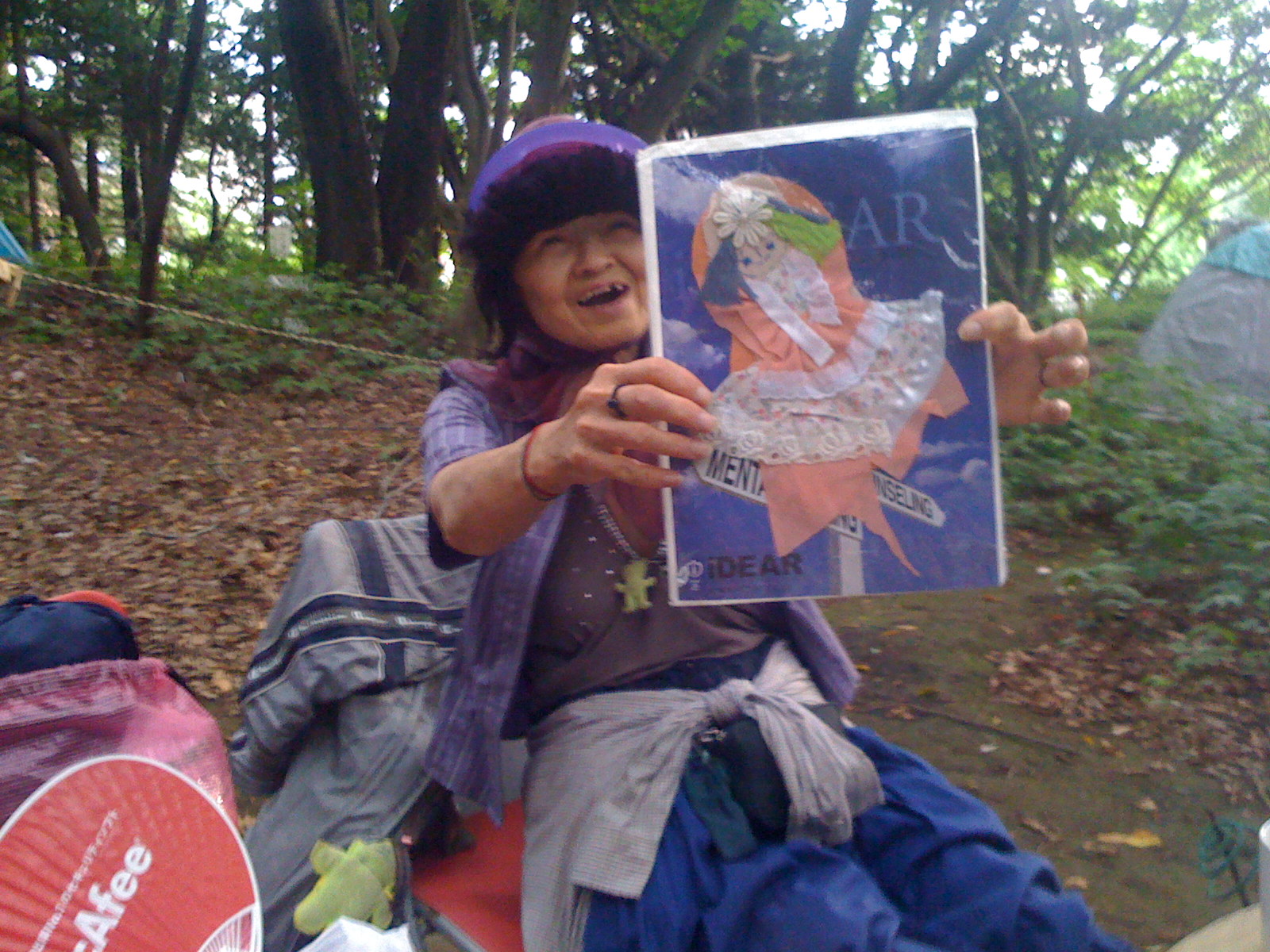 Nike has bought development rights to the Miyashita Park, Sibuya, central Tokyo. With it they plan to make it a commercial project rather than a public space that has been used for all sorts of actvities. For example any kind of art has always been guareented to be exhibited there whatever the political connotation. The public lose the rights on 30/31st of August of which they will hold a 2 day event. Some of the homeless are also fighting as parks are the only place they can squat. More homeless are envitable with the global financial crisis and by law the only places they can not be removed are public parks. At the bottom is the translated callout.

A team of different people from painters, professors and homeless are currently holding an event on the 30/31st of August to protest against it turning from a public to private space owned by Nike. The advertisement below:

is an invitation to all. However more than an event, it reflects a problem with the fight over public space. Havens of creativity, for politics and often homes for the homeless. Misako, one of those squatting in the major park of Yoyogi went to Berlin to protest against NIKE. Her youtube video has this message:

Protest Nike: Second Sin the social cleansing of the homeless in Shibuya, Tokyo (a dubious gentrification plan)
Due to limited numbers of temporary shelters provided by the Tokyo social welfare service, many people affected by the global financial crisis in Japan are now forced to live in public parks. While these parks are the only refuge for such people, NIKE, under the guise of making a 'social welfare donation', is converting one of Tokyo's principle parks into a purpose-built sports facility that will also serve as a lucrative advertising space. We oppose this decision, which will increase hardship and social misery for impoverished and displaced people. Since NIKE's worldwide headquarters is located in the United States, we call for our American friends and friends in other countries to restart protests against NIKE and its harmful business practices.

Misako is the owner of the ENOARU cafe, a barter cafe pitched in front of her tent where things, but not money are exchanged on the weekend and where a free art class is done every Tuesday from 1pm. She has also been to London and set up her cafe outside her tent in front of Waterloo Station for 3 months, 2 years ago, spending time absorbing our almost forgotten, out of sight, but still strong homeless street culture. In Miyashita Park, the homeless will no longer have the right to live there unlike the 150 who have set up in tents in Yoyogi Park.

Here is the translated document of the 'callout' and below it of the internet blog announcement. Translated by me and Mr Hama. If anybody wants important information translated into Japanese or wants to help translate something because they speak Japanese and English, please help to spread international information of current events to these tirelessly working activists and from them to us.

The park is ours!

The park is not a place for redevelopment, but should always be a place for creativity and a place of constant creativity which is important to be kept open. On the 11th of June, 2009, Shibuya-Ward's administration announced they have given naming rights to NIKE to develop Miyashita Park. The public space would be exclusively designed by NIKE company such as constructing a skateboarding park and rock climbing to be limited to the use of paying customers. The plan involves renaming the whole park with NIKE's logo.
This summer in September, the construction plan will be put in motion. Before construction starts, permission for the public to use the park ends on the 31st of August. People for the prevention for the "NIKE-alization" of the public's Miyashita Park - みんなの宮下公園をナイキか計画から守る会 will hold a summer festival on the 30/31st of August, 2009 in Miyashita Park.
We are attempting to think of ideas that maximise the use of Miyashita park's public space. We are addressing the question of the use of our public space that is a part of our lives. A park as a place where activities of fine arts will take place. A park is a place where a variety of expressions blossom. This exhibition is an attempt to experiment with how we can co-exist. This is not a place like an art gallery as there is guarenteed space to display any work of art. The place where works of art are displayed will transform its meaning socially, politically and culturally if planning goes ahead.
We expect the participants of these exhibitions of Miyashita Park to display various works of art. We ask participants to please come with their works of arts. We'll help. Aside from the two day festival of the 30th and 31st, if you want to display works of art, we warn you that you may suffer the legal hand of the law.
Feel free to contact us for advice.

From 11am, Free market and stalls.
From 12pm, Live performance (by Uran a Gel, Nukarumi) and art exhibitions.
From 6pm, Film based on a play (2008 Mito-Komon) (This Life), (Brian and his Company at Parliament Square SW1) (Hayakawa Yumiko)

Phone number 08065291871 (Organisers)
**** This is a callout for anybody to participate in the Free Market. Each stall is 2 tatami's wide. 300 yen to participate per 1 person (1 group). Need to contact until the day before to make a reservation. We can not accept a stall selling commercial goods. You can decide where you want to have your stall. Please feel free to contact the organisers for more information.


P.S. Fellow squatters, I question and am ashamed as to whether I would have gone to meet the homeless if there had been other squatters here of which there are none. I have been told that there is a great homeless culture within our homeless cousins in London by a Japanese homeless person that I've missed. Perhaps we're like hi and bi friends and are more like friendly, sympathetic distant cousins. However I encourage any of us to maybe explore a link between us and them and see what kind of cultural connections and network we might make in London.