Recent coordination between the Department of State and the Twitter
Corporation during the electoral unrest in Iran was a solid proof of the
close cooperation between media, the electronic industry (internet, etc.)
and the State Department. 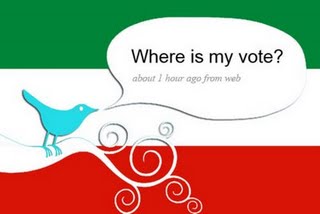 In its desire to build citizen to citizen contacts as a prelude to promote
official dialogues and ultimately establish a normal diplomatic and
commercial relation with the U.S., the Iranian government threw its doors
open on U.S. individuals and groups who appeared wanting to allay the
differences between the two countries. Although the majority of the peace
groups and activists who visited Iran were well-intentioned, there were
quite a few who were motivated by the idea of supporting certain political
trends against the Iranian government. These individuals and groups were
more interested in furthering the U.S. foreign policy objectives in Iran
and the Middle East by empowering the pro-U.S. non-governmental
organizations (NGO’s), than promoting genuine peace and friendship
between the two nations.

Among others, one such individual has been Robert Dreyfuss of the Nation
magazine, a social democratic publication that gained its place and
reputation in the ‘60’s, during the U.S. war on Vietnam, by opposing
the war on the one hand, but being acutely anti-Soviet Union on the other.
In the report of his recent trip to Iran, right before the June 12th
election, Dreyfuss manifests his utmost revulsion towards masses of people
who expressed their support for President Ahmadinejad and felt sympathy
towards the supporters of the pro-western leading contender Mir Hossein
Mousavi and his supporters.

In the June 9th, 2009 issue of the Nation, Dreyfuss reporting from Tehran,
characterized a pre-election rally of “tens of thousands of Ahmadinejad
supporters,” wearing red-armbands, in contrast to Mousavi’s green
emblem, as “a virtual fascist movement”. To fully satisfy his thirst
for revulsion towards Ahmadinejad, he goes on to call the president’s
50,000 young followers in a gathering as “a lumpen-proletariat crowd of
roughnecks and fascists.” These repugnant words have dripped from the
pen of a reporter who has laid claim to the mantle of “peace
activist”, a human rights defender and a friend of the American Iranian
people. As they say, with friends like that, who needs enemies.

The social and class instinct of Nation’s Robert Dreyfuss surfaces so
clearly when he attends a pro-Mousavi rally. Instead of hearing “Down
with the U.S.”, a usual outcry in pro-Ahmadinejad rallies, he hears the
call for “Death to Potatoes”, alluding to the President’s initiative
of giving out sacks of potatoes and flour to the poor and working class
families who appreciate the government’s welfare program. In his
report, Dreyfuss shows so much feelings of affinity towards Mousavi
supporters where women wore “attractive make up and pink lipstick, and
below their short outer garments” were “visible jeans and, in many
cases, high heels.” (sic)

Our American investigative reporter fell so much in love with Mousavi
supporters that he began predicting the outcome in favor of Mousavi and
the demise of Ahmadinejad, well before the election had begun, without a
hesitation in his fantasy world, he begins building an inflated and
imaginary picture in which the rich, thoroughly groomed, pro-western and
stylish, just like the guests in the U.S. Republican National Committee
(RNC) and the Democratic National Committee (DNC) are bound to win the
elections. He even misled his readers in New York by inventing facts
about “rumors that the leader, Ayatollah Ali Khamenei, is having second
thoughts about the President, too.” He gets so much carried away by his
own imagination that he writes “One well-connected mullah, Sheikh Ahmad
Karimi, who is working in the Mousavi camp, told me (him) that the vast
majority of Iran’s approximately thirty or so Grand Ayatollahs support
Mousavi.”

Such rumors were not in short supply. Among the false information spread
via wrongful reporting, doctored pictures and twitter images then
forwarded by bloggers are as follow: that three million protested in
Tehran last week-end (more like a couple of hundred thousand); that the
opposition candidate Mir Hossein Mousavi was under house arrest (perhaps
he had stayed home where things were ‘safer’); that the president of
the election monitoring committee declared the election invalid last
Saturday (total fabrication).

At the conclusion of this section, we must emphasize that Robert Dreyfuss,
as bad as he is, has not been the worst reporter that the U.S.
military-media complex has dished out to the people of Iran.

As we all know the communication industry works closely with the security
and military outfits, particularly in the periods of international tensions
and war. It is common knowledge that the U.S. media in Iraq and
Afghanistan are integrated with the intelligence apparatus and war
machine. It is not hard to make the logical deduction that in turn the
U.S. media serves as the eyes and ears of the agencies whose job is the
collection of vital information.

Recent coordination between the Department of State and the Twitter
Corporation during the electoral unrest in Iran was a solid proof of the
close cooperation between media, the electronic industry (internet, etc.)
and the State Department. This principle has a general application in
other areas of activity such as student exchanges, international
conferences and educational seminars in both business and government
bodies, human rights activities, and monitoring other countries elections
and foreign student training. Just like in the case of other
nationalities - Polish, Ukrainian, Asian and Iraqis - who emigrated to the
U.S. and later on were trained by U.S. intelligence agencies to influence
the policies of their “homeland”, so too, some Iranians who long ago
emigrated to the U.S. are cooperating with the U.S. government against
Iran’s national interests. Given all these interrelations, the U.S.
role in the post-election turbulence would have been impossible without
long-term preparations that required financing, equipping and training.

On July 24, Yahoo News reported that the U.S. Senate has approved $30
million dollars for expanding Radio Free Europe-backed Farsi language
radio broadcasts into Iran. In addition, another 20 million dollars bill
was passed which would be in a special fund to help develop ways for
Iranians to access and pass information to others outside of Iran,
by-passing internal Iranian management. The champions of these bills were
Republican Senators John McCain, Lindsey Graham and the Zionist-est of them
all, Senator Joseph Lieberman. It is an eye-opener to know that the $50
million allotment was attached to the Senate’s defense authorization
bill, according to Washington Times of July 26, 2009.

The Bush Administration unveiled in 2006 a $30 million “democracy”
program for Iran. Later on it added another $60 million to be channelled
into the accounts of Iranians who would be ready to set up “civil
society” groups - actually intelligence and operational networks. In
the days following the recent Iranian elections, the National Endowment
for Democracy would be looking for more individuals in critical places
inside Iran who would be ready and capable to undermine the Islamic
Republic and force it to give in to the Israeli-U.S.- pressure demands
around the nuclear program. Andrew Lewman, the executive director of the
TOR project, a program originally developed by the U.S. Navy said,
“There is a growing amount of money available for Web and media
activities.” “Designed a decade ago to secure Internet communications
between U.S. ships at sea, The Onion Router, or TOR, has become one of the
most important proxies in Iran for gaining access to Web sites such as
Twitter, YouTube and Facebook.” David Denehy, the Iran democracy
program coordinator for the State Department from 2005 to 2007, said, "We
funded and supported innovative technologies to allow them to do this via
the Internet, cell phones and other media."

One organization, out of a few dozen, through which the U.S. interferes in
the internal affairs of Iran is the National Endowment for Democracy (NED),
an agency that is funded both by Congress and private sources whose
objectives are furthering the U.S. foreign policy interests in other
countries. In Iran this goal actualizes in overthrowing the Islamic
Republic that was the product of the 1979 Revolution. In the 1980’s,
President Ronald Reagan was the architect of the NED, and the primary
reason for its creation was to do overtly, the operations that the CIA had
long done covertly. This quasi- intelligence organization in the late
1970’s was involved in Nicaragua, in 1990 in the Bulgarian election, in
1991 in the Albanian election, in the years between 1990-92, NED financed
the Cuban-American National Foundation, in 1992 in the Mongolian election,
during the Clinton Administration NED was active in Haiti and in 2002
nearly succeeded in overthrowing President Hugo Chavez in Venezuela.

The NED has been active in the Iranian communities for nearly three
decades, granting hundreds of thousands of dollars to the opposition
groups. According to the June 23, 2007 article in the on-line Foreign
Policy Journal, “NED gave $345,000 to the Abdorrahman Boroumand
Foundation (ABF)”.

Another organization that has benefited from the NED funding has been
the National Iranian American Council (NIAC), which fetched $25,000 in
2002, $64,000 in 2005, and $107,000 in 2006. The grants were designed
to expand the NGO’s outreach and capacity in Iran, and foster
communication between the opposition groups in Iran and the international organizations operating under the cover of civicsocieties. The president
of NIAC is Dr. Trita Parsi who in his frequent appearances on CNN in the aftermath of the Iranian election claimed that Iran would be considered at
fault, if under the Obama

Administration it does not reach an agreement with the U.S. Obviously
for receiving a total of $196,000 in the period between 2002-2006, this is
the least Trita Parsi could do for NED.

By being exposed as one of the biggest recipients of NED’s funds, NIAC,
in the eyes of patriotic Iranians, is a U.S. foreign policy instrument
used as a battering ram against the Islamic Republic’s policy
objectives.

To spoon feed Iranians the position of the conservative faction of the
U.S. government, NIAC engineered a survey of its own members and then
declared the results as the representative view of the Iranian -American
community as a whole. The poll is severely skewed in several respects:
a. It is too small to be a representative opinion of the Iranians in
general; and b. This small poll is taken primarily from the
wealthy Iranians in NIAC.

According to the figures and policy adopted by NIAC in its August 12, 2009
announcement “61.4% believe that with regard to Iran, the U.S. government
should put diplomacy on hold…” and “a slight majority 50.2% favor
targeted political and economic sanctions…” Should we give the bosses
of NIAC all benefit of the doubt, these figures only show how conservative
the membership of NIAC is and to what extent they are the friends of the
Iranian people.