'AirRobot' were showing off their AR100B surveillance drone at the anti-BNP protests in Codnor, Derbyshire. 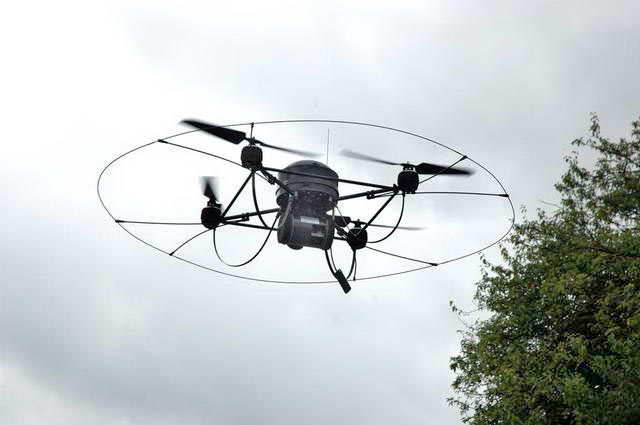 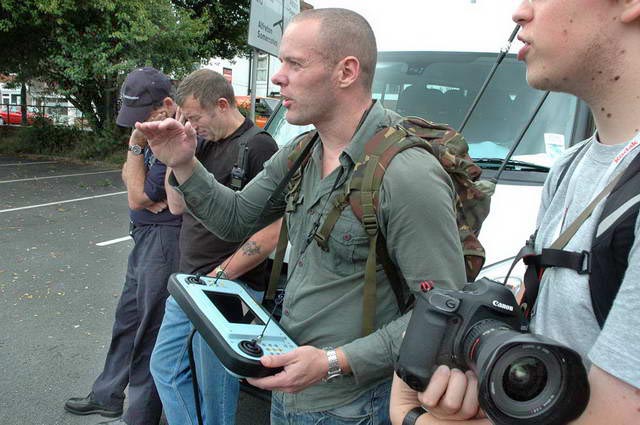 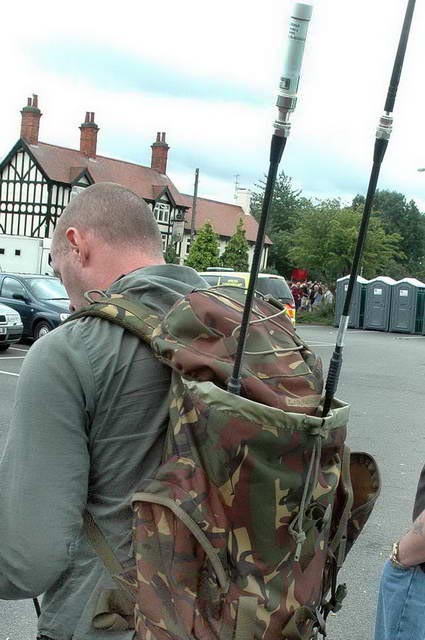 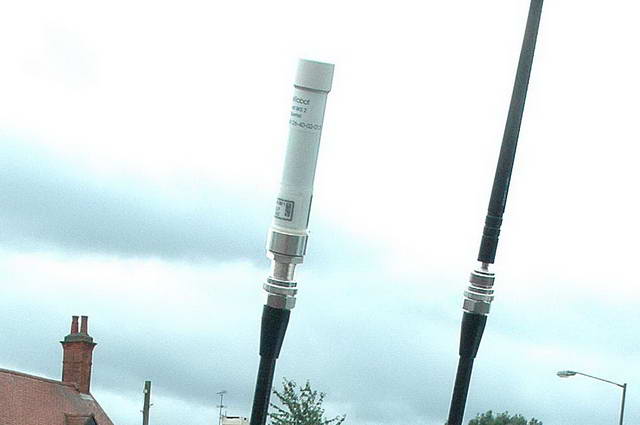 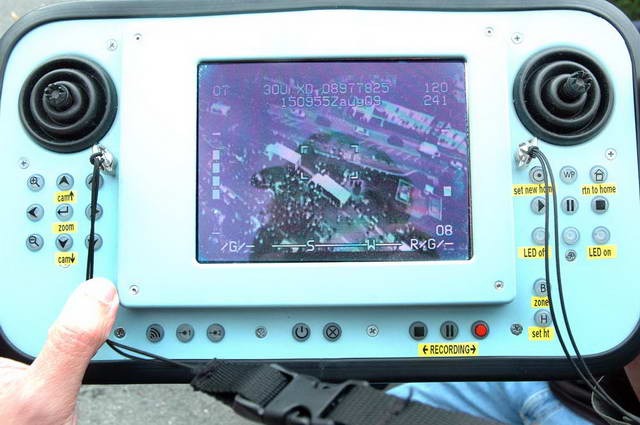 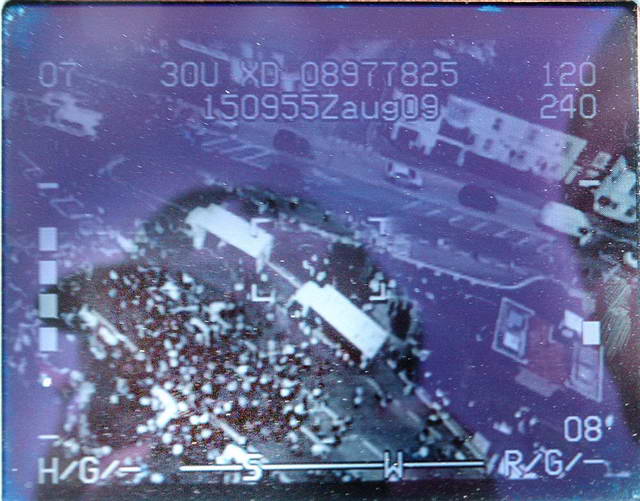 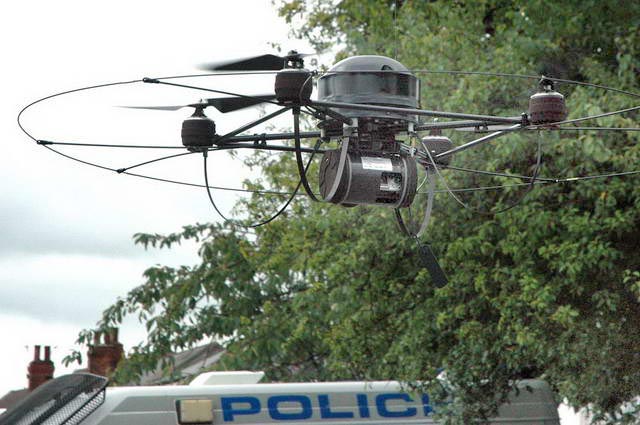 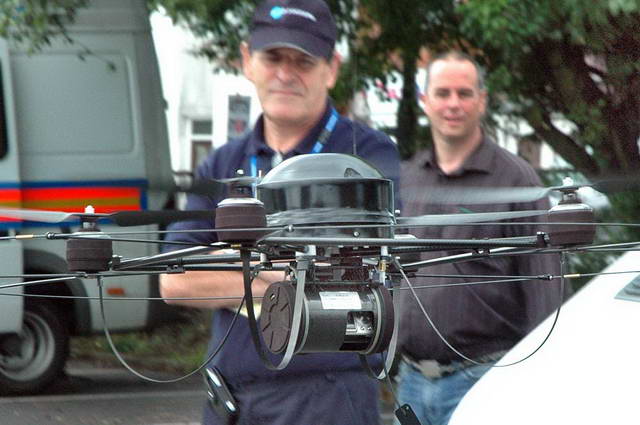 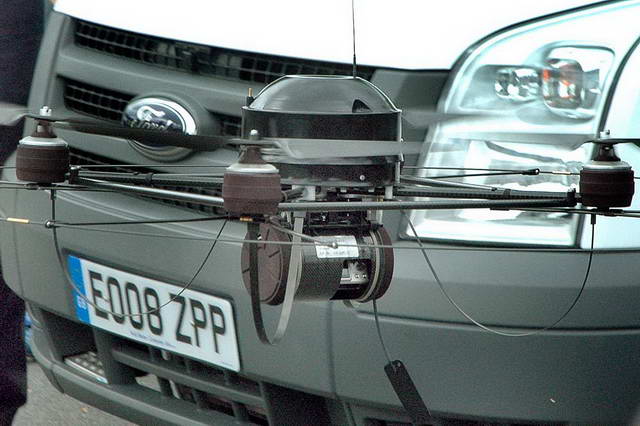 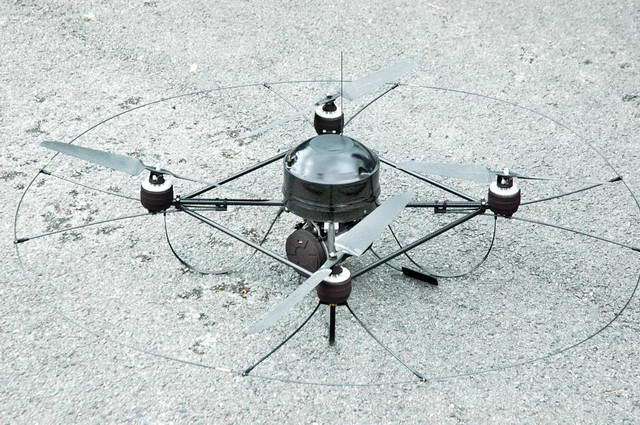 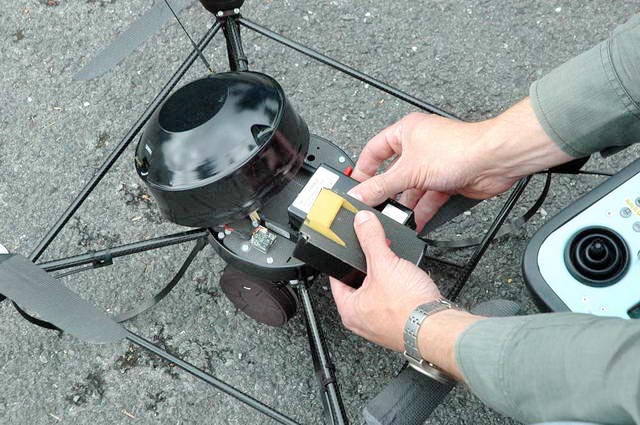 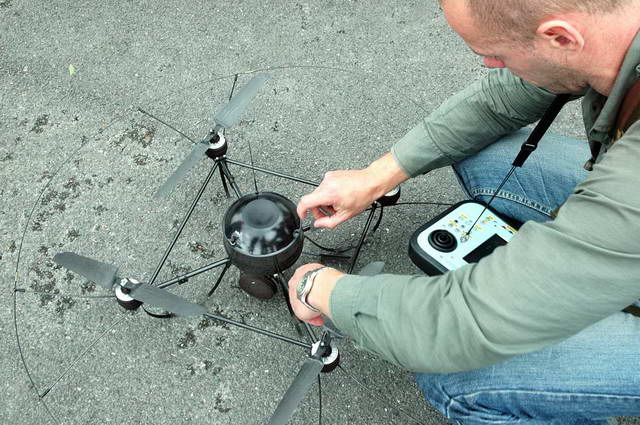 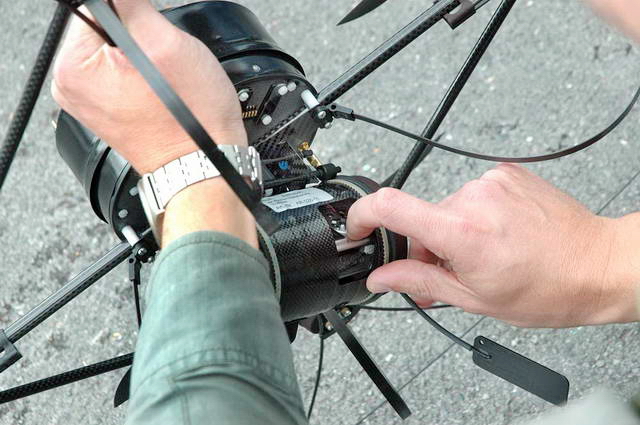 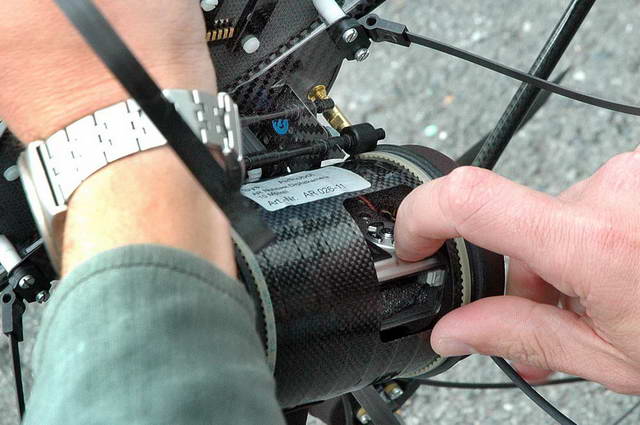 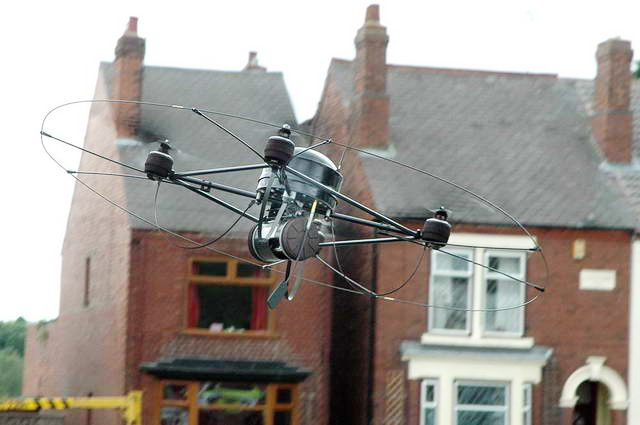 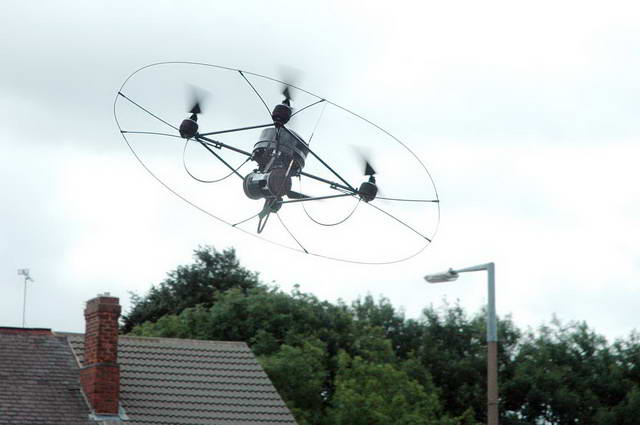 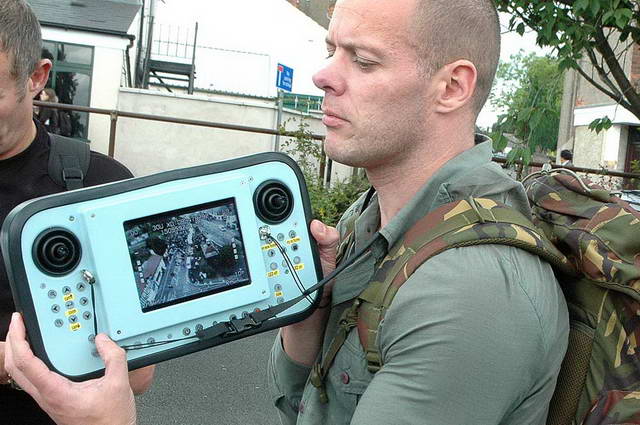 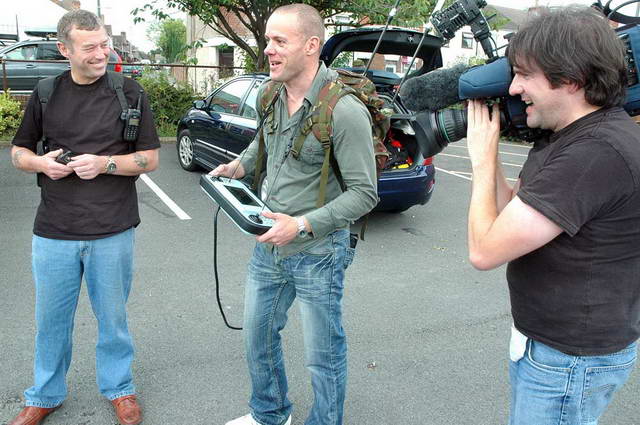 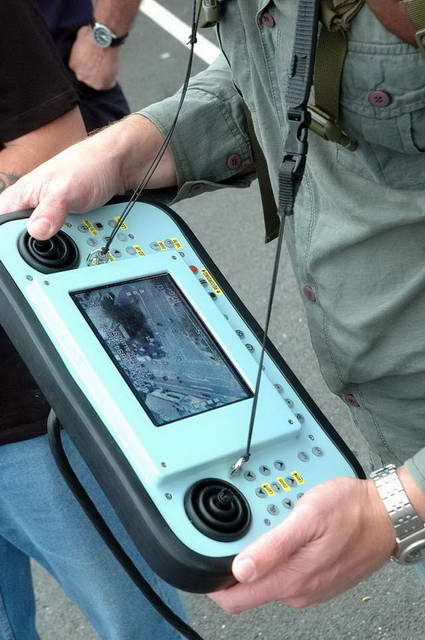 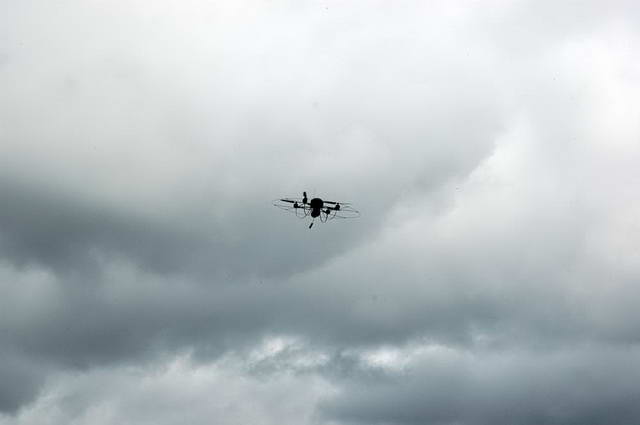 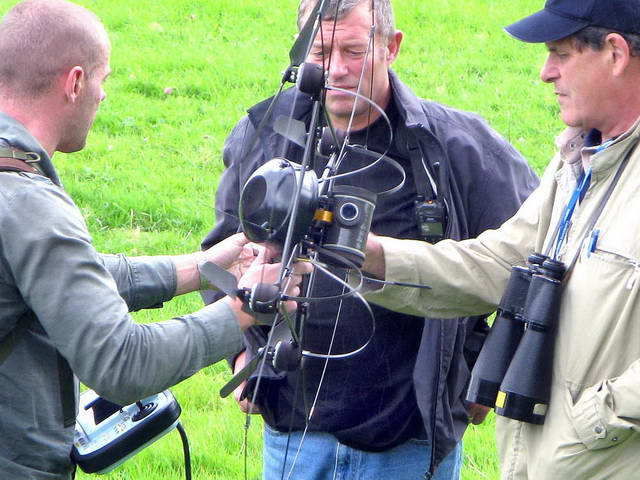 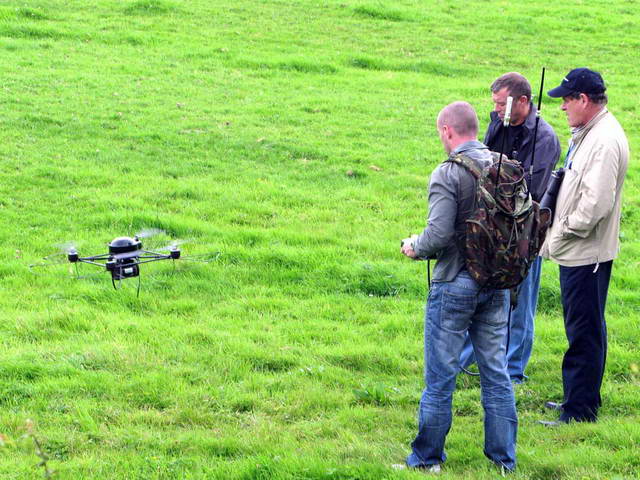 'AirRobot' were showing off their AR100B surveillance drone at the anti-BNP protests in Codnor, Derbyshire.

It was also flow over the lane at the second 'designated protest point' in Codnor Denby Lane. I didn't see it, but I guess they also used the device over the festival field itself.

Pilot Mark Lawrence was from the German company, AirRobot. He was demonstrating the surveillance drone capabilities to members of the Derbyshire Police Operational Support Unit. The police haven't bought it yet but they said that they may share the £25,000 costs with Nottinghamshire Police, same as with the helicopter. I said that I was aware of a number of different manufactures of this sort of equipment, so, what about those? The police rep said that optically, and endurance wise, they are all quite similar. This device however was a much more stable platform. For example a gust of wind could unbalance the craft before an operator could correct it. But some of the trim capabilities were automatic. Thus, the operator can pay more attention to the subject, and less to the flying of the device.

It has about 30 mins battery life endurance, a max height of 1000m although I think it would usually be operated a lot lower. Horizontally, between 500 - 1000m because of the range of both the control signals and the informantion downlink.

Like International Rescue Thunderbird 2, it can be fitted with a number of differant cameras. They come in modules. It seem to me this is a neat way of saving weight in that exactly the right camera for the mission that moment can be fitted. It takes only a couple of minutes to change the camera module if required. The image on the control deck was of 'monitor quality'. Enough to fly it and see where it's pointing. High quality images can both / either be stored on a card or transmitted as downlink to the gold commander operations room.

This was the same bit of kit that was deployed over Stonehenge during the Summer Solstice in June, this year.

All in all a nifty bit of kit. I want one!

SpyBots flying over StoneHenge during the Summer Solstice

Is there anyone here who know what the law / legislation is it that governs the use of this kit.

Some will be to do with RIPA [Regulation of Investigatory Powers Act 2000], i guess since its about surveillance. Some about its use in public or private [airspace]. But i think if this was a glider, hang-glider or aircraft in general, then there are many aviation laws. With this one though, i wonder if the civil aviation act applies. Who can operate it? where, with what permissions. I mean you can fly a kite without permission, can't you, so is it just the police and military that can use this kit? Service near airports, military airfields is an obvious prohibition. Personally, I don't know anything about it, Any lawyers can help?

Spy in the Sky

Mark Lawrence has made a few bob by spying on people as they go about their business.

As the director of AirRobot UK he supplies and operates a mini-helicopter fitted with CCTV to the police so they can collect evidence against demonstrators.

The military designed spotter drone was used to video and photograph supporters of Unite Against Fascism protesting against the BNP's Red White and Blue festival in Codnor, Derbyshire.

However, Lawrence is less than enthusiastic when the legitimate spotlight of public scrutiny focuses on his business.

The 38-year-old has not registered his company to deal with personal data with the Information Commissioner's Office.

Unless Airrobot can prove it is exempt from the Data Protection Act the firm which supplied spy equipment to the police will have committed a criminal offence.

The-sauce.org has now written to the compliance department at the Information Commissioner's Office (ICO) requesting an investigation.

Companies involved in collecting data for “crime prevention and prosecution of offenders (including some CCTV systems)” must register, according to the ICO.

The quango states: “Under the Data Protection Act every organisation that processes personal information must notify the Information Commissioner’s Office, unless they are exempt. Failure to notify is a criminal offence.”

AirRobot is a German company but its UK subsidiary seems to be a one man band. It seems to have been originally run from Lawrence's semi-detached home in Sidney Street, Salisbury. The house was worth £202,000 in 2004.

The firm was set up in April last year and has not yet filed any accounts. His fellow director and only shareholder, Rebecca Judge, 38, resigned from the company in May this year.

Tosser
Airrobot is currently registered at Companies House at the UK Centre for Homeland Security. However, the building is run by the private military training company ISSEE which states he should not be using their address.

Asked whether Airrobot was exempt from registering as a data controller, Mr Lawrence said: “I cannot answer stuff like that, I'm not allowed. I have signed a non-disclosure agreement with the police. I would get into a lot of trouble.”

Asked about the decision of his fellow director to resign from the company, he added: “That's really pissed me off. You're a tosser. That has really hit a nerve there so just fuck off and don't call me again.”

Derbyshire Police has been asked whether AirRobot is exempt under the data protection act but has not yet responded.

National security
The force today refused to release video and photographs captured by the drone following a Freedom of Information Act. An appeal against this decision has been lodged by the-sauce.org.

The police state the data is exempt because it forms part of an on-going investigation and also sited health and safety as a grounds of refusal.

Derbyshire has also also refused to confirm or deny whether the information gathered by the “spy in the sky” has been handed over to special branch, other police forces or government departments.

Stuart Barlow, the Freedom of Information Manager at the force said publishing such information could impact on the security services, national security, criminal investigations and health and safety.