Urgent appeal for political prisoner in Turkey suffering from cancer

Appeal for Guler Zere, who has been in jail in Turkey for 14 years. She is now severely ill with cancer but the authorities are not releasing her, even though prison conditions give her no chance of recovery. A campaign has started for her release, and there is also an appeal for an urgent delegation to Turkey. 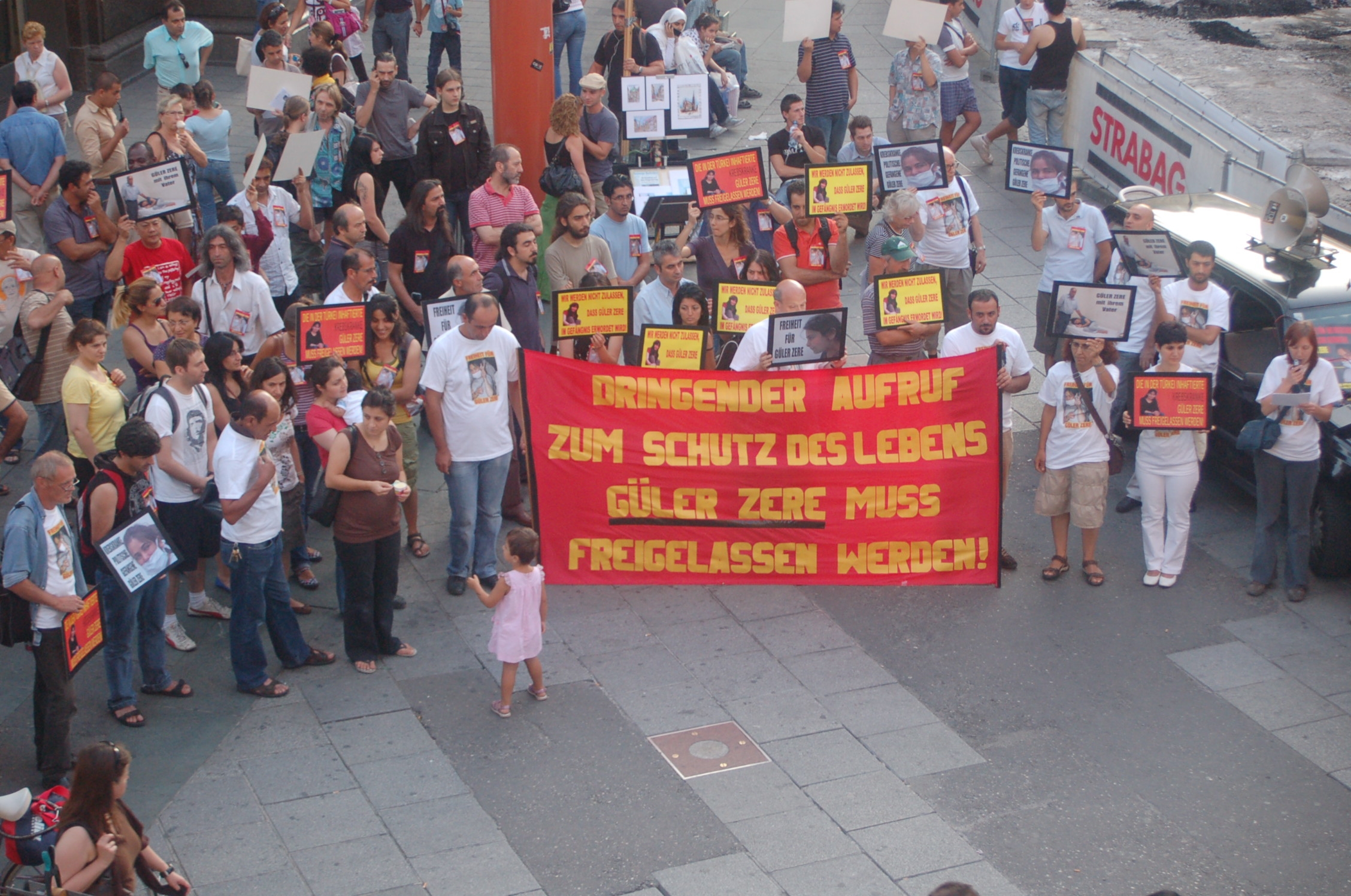 August 19 protest in Vienna in support of Guler Zere

COMMITTEE FOR THE FREEDOM OF GULER ZERE - AUSTRIA

Just to introduce ourselves, our committee consists of various organisations and individuals in Austria, who came together to act in the urgent matter of Guler Zere.
Guler Zere is a political prisoner in Turkey, who suffers from cancer in its final stages. Nevertheless she is kept inside a prison cell of a hospital in Adana, ignoring the legislation in place to release seriously ill prisoners. The authorities have failed to heed two medical reports favouring her release, while another report, favouring keeping her in prison was prepared by the forensic medical institution in Istanbul. This report is now being contested by the lawyers of Guler Zere.
There have been many public meetings and protests organised in Austria, as well as in European cities. In Turkey there is quite a lot of publicity and campaigning about this issue. Dozens of democratic mass organisations, NGO’s, law associations as the Progressive Jurists Association, different bar associations, intellectuals and famous artists have supported the campaign. However, pressure from outside Turkey is needed as well.

Therefore;
1) We ask you to distribute and to sign our urgent appeal for the freedom of Guler Zere below, which will be forwarded to the EU enlargement committee and other relevant EU bodies, as well as the UN High Commissioner for Human Rights and the Ministry of Justice of Turkey... Please send it back signed as soon as possible to our mail address:

gulerzere.freiheit@gmail.com.
We plan to send this appeal to the above-mentioned institutions on Monday at the latest, with as many signatures as possible.

2) We want to send an international delegation to Turkey at the beginning of next week.
On 27th August the general assembly of the forensic medical institution will meet to review the appeal against the unprincipled report issued earlier.
This decision will be determine wheter Guler will receive proper treatment in freedom, or whether she will be left to die under prison conditions. There are urgently needed volunteers to participate in this delegation from various European countries.
There are some volunteers from Austria, prepared to stay from Monday till Thursday next week.
We especially appeal to medical associations, lawyers and other professions in Europe to join this delegation, which will meet Guler Zere’s doctor in the hospital where she’s being treated. The programme includes as well a visit to the family of Guler, who are on a vigil in front of the hospital.

Güler ZERE, a long-term political prisoner in Turkey, suffers from cancer in the fourth and most severe stage after her illness was diagnosed late due to isolation prison conditions. She did not benefit from treatment by any doctor when the illness was at an early stage. Also, after her illness was diagnosed, her treatment was not started by reason of the “treatment queue” and “no space in the prisoner dorm”. As a result of that, her illness worsened and became critical. Today, her doctors state that even with effective and sufficient medical treatment, her survival chance is only 30%.
Though her life is at very high risk, she is still being held in the prison cell of Balcali state hospital in Adana. As per Article 16 of the Law on the Execution of Sentences and Security Measures numbered 5275 in force in Turkey, execution of sentence can be revoked in cases where the sentence may create an effect beyond its purposes. As per the Paragraph 2 of the same article, execution of sentence shall be revoked in cases where detention in the hospital detention ward constitutes a definite danger to the life of the prisoner for some illnesses, for which there is no possibility of medical treatment, or any possible treatment may only be long term.
There are already two medical reports by Cukurova University, of which the first says that treatment of Güler ZERE under prison conditions is impossible, while a second report says that treatment is impossible even in the prison department of a health institution. Both reports clearly say that ZERE’s life is in danger and that the execution of sentence has to be stopped.
Despite that, Güler ZERE was sent to the Forensic Medical Institution in Istanbul and she had to face a 28-hour road trip, for the sake of a 5-minute medical examination. The result of this examination was, that contrary to the Balcali hospital’s statement, in the forensic medicine institution in Istanbul’s view, ZERE could be kept in hospital under prison conditions.
An appeal was lodged against this report, and a final decision by a higher body of the forensic medical institution is awaited.
The forensic medical institution should cease to have power over the reports issued by university institutions.
The state of health of Güler ZERE is worsening every day and she is essentially waiting for death, while she lacks any possibility for effective treatment and moral support, and also has no right to free choice of doctor or alternative methods of treatment.
Dozens of NGO’s, democratic mass organisations, including trade unions have come together to demand freedom for Güler ZERE. About a month ago, relatives of Güler and members of the prisoners’ relatives association TAYAD started a sit-down protest in front of the hospital. A rally in her support attracted several thousand people.
The sentence must be set aside in conformity with Article16/2 of the Law on the Execution of Sentences, and Güler ZERE must be released immediately.
She is one of hundreds of prisoners in Turkey who suffer from illness, and many before her have died as a result of the isolation conditions of imprisonment, and the medical neglect all too common in prison environments. The latest death case was prisoner Resul Güner, who died under prison conditions at Kartal’s Education and Research hospital on 17 August 2009.
We will not allow Güler ZERE to be the next to die as a result of this medical neglect.


This appeal by the 'Committee for the Freedom of Guler Zere' is supported by following organisations:

Committee for the Freedom of Guler Zere - Austria